Brian de Palma's Domino is already filming. I figured this would be another one his announced projects that never made it to production, so I was plreasantly surprised by the fact that it's actually getting made. Nicolaj Coster-Waldau is the lead, and he can be pretty bland. I also haven't been impressed with anything writer Petter Skavlan has done previously, but this is still De Palma doing a crime thriller, so I'm cautiously optimistic. Carice van Houten has replaced previously announced Christina Hendricks as the second lead.
Top

I guess we can now say he's a Game of Thrones fan.
Top

Somehow, the movie being about CIA agents on the trail of ISIS seems like the most idiosyncratically De Palma plot I could imagine. I hope that some recent developments in indie distribution mean it won't suffer from the obvious budget shortfalls that have really brought down most of his movies to me since Mission to Mars.
Top

After reading through this DePalma would have been better off making Domino about the life and times of Domino Harvey.
Top

Just compile every .gif he's ever posted into one eight-part miniseries event and call it a day.
Top

Voiceover for the trailer: "People are always asking if it's pronounced 'giff' or 'jiff'. But they're both wrong. It's--"

(Credits quickly flash by while this plays.)
Top

Domino to open in Italy on June 20th.
Top

Here's my Chrome-assisted translation of a pull-quote:

You have just finished "Domino", a film about terrorism, shot in Denmark, Belgium and Spain ...

B. de P. It was a horrible experience. The film was underfunded, it was far behind, the producer did not stop lying to us and did not pay some of my staff. I do not know at all if this feature will be released.
Top

Sounds like it'll just be in five theaters, then. 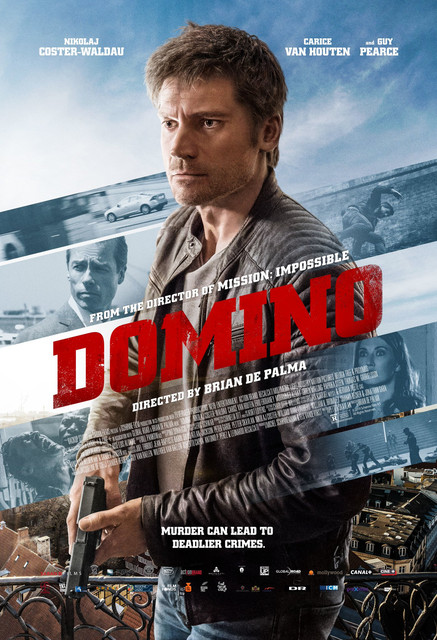 Because the producer doesn't want you to see this.
Top

domino harvey wrote:Why are those last two picture lines running over his jacket

"Word had it that Domino was originally 148 minutes long. But the version being released clocks in at 89 minutes. Did De Palma sign off on this, or did the producers edit the film down themselves? The filmmaker’s name is still all over the promotional material, which indicates he has some say in what’s going on here. But the specter of a problematic production lingers."

This reeks even more of a Dying of the Light -style imbroglio. Too bad De Palma and Schrader are no longer speaking, or they could be comparing war stories. Grindhouse slathered Schrader's name all over the bowdlerized version of DotL, so no surprise that Saban would try the same.
Top

Appalling. The (very few) number of positive reviews this is receiving, even the tepid ones, are delusional. The production is threadbare, right down to the title fonts. It's unmistakable that Domino has been abandoned by its director. There is no evidence that this went through any form of responsible post-production, with raw DV badly in need of color-correction, and scene breaks that suggest that this thing was gutted down to its most basic plot points. De Palma doesn't take a possessory credit, nor should he. He didn't take his name off of it either, nor should he. Notwithstanding any amount of production headaches/disasters, his actors are completely disengaged, his control of camera imprecise, and his set-pieces are ill-conceived. To some extent, he has to take some responsibility. Guy Pearce's performance has been compared to Foghorn Leghorn, though it's closer to Brad Pitt in Burn After Reading. Nikolaj Coster-Waldau and Carice van Houten must have been dragged to the set kicking and screaming, lest they break their contracts, as they seem to be acting under threat of a lawsuit. Pino Donaggio reproduces Herrmann's Vertigo and Psycho scores, as well as his own work on Blow Out, note-for-note, barely concealing the guide cues he was given for his temp track. I will gladly stick my neck out for Raising Cain and, on a cheery day, The Black Dahlia, but Domino is completely indefensible.

Afterward, as a palate-cleanser, we were overjoyed to watch Greta to save the evening. Greta, for Christ's sake!
Top

I’m seeing this pop up in my Letterboxd feed, is it theatrically screening somewhere, or is it up on digital platforms for rent?
Top

It must be on digital platforms somewhere as it was uploaded to my Plex account well over a month ago.
Top

I just checked, it’s indeed on Amazon to rent for $6.99, which is comically low for a new release (usually they start at $14.99 for a couple weeks). I’m morbidly curious, but we’ll see if I’m seven dollars’ worth of interested...
Top

re. the comment above. I thought the production was quite slick - I placed a few minutes in that the DP was Almodóvar regular José Luis Alcaine and it has the same clean and colour saturated look as one of his films. I thought it was an above average action film with a fun finale set piece which is about on par for novelty and entertainment value as the ballet sequence from PASSION. There are also a few laugh out loud moments from DePalma playing violence for kicks and a Vertigo homage! It won’t set your world on fire but it’s a solid enough one off view. Go in expecting something in line with SNAKE EYES.
Top

Does this mean I’m alone (or nearly) in considering Snake Eyes one of De Palma’s masterpieces? But then, the only films of his that are complete failures in my eyes are Wiseguys and Get to Know Your Rabbit. Even Mission to Mars and Bonfire of the Vanities have at least enough technique to keep the viewer engaged. I’m intrigued by the idea of a De Palma/Alcaine collaboration, even if it’s on something of a failed film.
Top
Post Reply
57 posts