Alexa, tell me about a movie I never want to see
Top

Long ago, when our family was on vacation -- in a location with limited TV choices -- a broadcast of this "musical" came on. After listening/watching for about for about 5 minutes, all our children begged us to turn the TV off (they had no idea what it was -- and I had never proselytized against ALW).
Top

Universal showed footage of this at CinemaCon, revealing that the titular cats will be mocap-aided CG. One commentator on Twitter described it as “Andrew Lloyd Webber’s Avatar.”

And that, unfortunately, makes three posts on this film.
Top

They’re apparently also going to be shrunk down to be actual cat-sized in real settings as opposed to making everything bigger and staged, which makes this whole project even more surreal/likely to be an elaborate prank on an entire world
Top

Cats is one of those things that everytime I'm reminded of it I'm in awe that it exists. It's a musical about self aware cats that break the fourth wall and while that may sound intriguing I can assure you it's so utterly and shamefully awful. I'm sure I like the many of you can't wait to see Jason Derulo wax poetic as Rum Tum Tugger or watch "Cats" named Munkustrap and Skimbleshanks pontificate about a literal cat heaven (Which is a part of the narrative.).

I'll eat crow if the movie is somehow good but my prediction is that it'll become a memeable joke because I cannot fathom how anyone could turn Cats into something tolerable. It's awful. The musical is also an unbelievable (For this type of musical.) three hours long. So here's hoping Hooper is merciful and cuts chunks out.

Imagine this but millions upon millions of dollars thrown at it WITH CGI:

It can't possibly be as fabulous as "Zoo Animals on Wheels."
Top

I still remember watching this with my mom years ago, and we turned to each other in disbelief. It's nothing but a VERY LONG musical revue with clever cat costumes. I can see it working for people because of the unique atmosphere it creates on the stage , but the underlying source material isn't great. It just can't sustain a feature film.
Top

I actually like a lot of Lloyd-Webber’s score—and the concept is… Unique. It’s an essentially plotless revue with performers in bizarre cat costumes singing the lyrics of TS Eliot.

But the show itself doesn’t work for me at all. I found the recent Broadway revival interminable.
Top

They can't say they didn't know what they were getting into. I'm amazed that Rob Marshall didn't get the job.
Top

I grew up listening to the Cats soundtrack on road trips (alternating with John Denver and Bette Midler's Beaches soundtrack). Spoiler alert: it was Mungojerrie AND Rumpelteazer.
Top

I'll cop to seeing the show on Broadway, very early in its original run. It just seemed like an amusing little idea for a revue that got really horribly overblown in that Trevor Nunn way, the fun curdled into self-importance and faux seriousness and it all got to be overbearing and ultimately ridiculous. Wild horses couldn't drag me to see the film.
Top

Ha! Thank you for the correction. I don't meant the Eliot book of course, but the musical. The soundtrack album without people in cat costumes is OK, and "Memory" has become a pop standard. If the Three Tenors sang it, it must be good!
Top

An audible, involuntary “oh, noooooo” sailed past my lips upon sight of the first cat.
Top

Plus the all-important terrible attempts at slapstick!
Top

Jesus, even with less than 10 seconds of screentime in that trailer, Rebel Wilson managed to annoy the hell out of me.
Top

As if I needed more reasons to avoid this film, that insufferable James Corden is in it.
Last edited by Finch on Thu Jul 18, 2019 6:03 pm, edited 1 time in total.
Top

This was the shot that made me start laughing audibly at my desk: 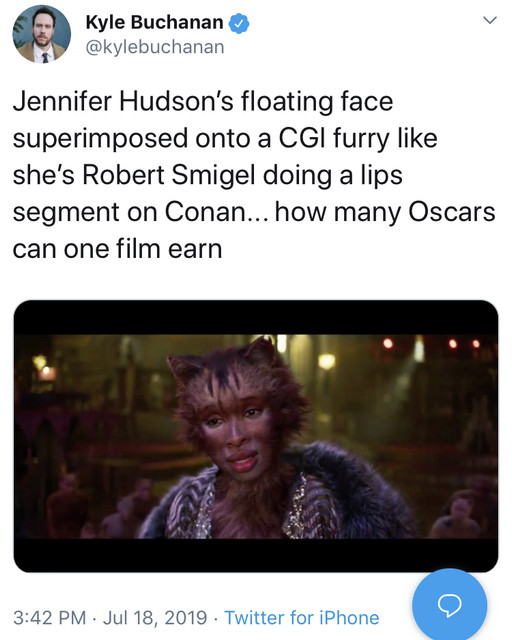 I'm going back into my hidey-hole. This trailer makes me never want to see another movie again.
Top

Holy crap. I love the stage show, but goodness that was a mess.
Top

When I stated above that Cats was bad I had no idea the film version would be doing the stage version justice in the awful department. This is above and beyond my wildest expectations.
Top
Post Reply
168 posts