New York City's Film Forum whips up a delicious Technicolor camp extravaganza this month, and that Cobra Woman is in on it.
Top

I wonder if the rights to this film is caught up in some legal issues...d'ya read me, flixyflox?
Top

I bought the LD back in 95/95 when it came out. The reason it went out of print I assume is because DVD started a year later. I wasn't aware of any 'rarity" issue. I know there are collector's IB prints and an officially struck IB 35mm print of Gang in NY and one of these might be the print being screened. (Hope the same goes for Cobra Woman)


The color is good - similar to Fox Channel titles like Down Argentine Way. It could be even better, but I am not really happy with a lot of Fox' color restorations - say Gentlemen Prefer Blondes - which end up too dark after the restoration work. (Pity this as Fox is maybe just behind Warner in the care it takes with classic material.)
Anyway a transfer of this print would look just fine (as does my DVDR of the LD)
Top

Dont' be a square from Delaware!

Carmen and the erectile bananas:

some people say I dress too gay
but every day I feel so gay
and when I'm gay I dress that way
is something wrong with that?

flixyflox wrote:The color is good - similar to Fox Channel titles like Down Argentine Way. It could be even better, but I am not really happy with a lot of Fox' color restorations - say Gentlemen Prefer Blondes - which end up too dark after the restoration work. (Pity this as Fox is maybe just behind Warner in the care it takes with classic material.)
Anyway a transfer of this print would look just fine (as does my DVDR of the LD)

Thanks for responding, Flixy. 8-) I agree that Fox's Technicolor DVD transfers register too dark. In that respect, Leave Her to Heaven wound up losing some of the splendor and lushness of its original colors. I guess Fox could claim that the blacks look "rock solid" by doing this, while masking inherent flaws in the source materials in the process. But I don't like that strategy; duller colors and less detail is a steep price to pay for these "improvements." The R2 version is in fact preferable, despite it being a bit more noisy. Also, the untampered-with trailer on the R1 disc more closely resembles what LHTH should have looked like. Just see for yourself: Brighter, more saturated colors. I've heard that Fox is the studio that has the least well-preserved film library among the "big five," so they have lesser elements to work with from the start before the transferring process. MGM, Goldwyn and Disney(and a great portion of Warner's prints and original elements) have been stored and looked after much more conscientiously through the years. That gives them a head start, and this is more often than not shown to advantage at the end of the road. [/b]
Last edited by viciousliar on Sat Aug 06, 2005 7:34 pm, edited 2 times in total.
Top

"some people say I dress too gay
but every day I feel so gay
and when I'm gay I dress that way
is something wrong with that?"

You just can't go wrong with Carmen going absolutely bananas at full blast on coke, can you?

Vicious it's really the three strip titles that are a problem. On one of the Marilyn reissues (either Gentlemen or Niagara) there is some stuff about the restorations but they just seem to have printed them too darkly as we both agree. And yes I have the R4 Leave Her ot Heaven which is both better than the R1 and improves on the LD by cleaning up the 3-strip fringing in a couple of outdoor scenes. So far I think all the B&W classics have been fine and some are Warner quality (Panic in the Streets, Ghost and Mrs Muir, Best of Everything - which is not even Techni but DeLuxe!)

Anyway back to the Gang's All Here

"Baduca, Baduca
If you wanna you can rhyme it with Bazooka
but don''t poopoo Badcua
It's a little bit of Paradise.."
Top

forgive my ignorance of American geography - it's Paduca.
Top

This one's for you, flixy (and perhaps Criterion, Matt) - there IS one, just one perfect print of The Gang's All Here in existence, and it's NOT the one shown in NYC this week.
Top

Insane as it is, TGAH is exactly the kind of thing that Fox should have been doing with its musicals in the '40s -- something really lavish, vulgar and visually spectacular to match that lavish, vulgar and visually spectacular Fox Technicolor. So many of the Fox color musicals were handled by abashed directors like Walter Lang and choreographers who weren't about to do anything really weird; Berkeley, on the other hand...

Of course, this was the end of the road for his style; MGM was just about to take over the movie musical, and their way of doing numbers was to stage them semi-realistically, with long takes and few flights of insane fancy. Berkeley did a few movies for Arthur Freed, but you could tell his heart wasn't really in that "respectable" style.
Top

Agreed. Fox 40s Musicals (along with Columbia 40s musicals) are something of a nadir in the form, with onyl brief releif from back-scene talents like Jack Cole and Gene Kelly. TGAH is a work unto itself. For lurid color design they are only equalled by 40s Universal.

Re the NYC screenings I had reports that the cofeature Cobra Woman was only a 16mm print. However the exhibitors are lining up further screenings of IB prints - Pandora and the Flying Dutchman among others.
Top

The Gang's All Here has just been released by Fox France (Region 2 DVD) under its French translation (sic) : Banana Split.

I didn't expect much from the quality of the DVD but had a fantastic surprise : the transfer is gorgeous, the sound pristine, the subtitles removable & the price very decent. The cover art of the DVD is better than the wrap box. As must go for anyone who has a taste in the tutti-frutti... 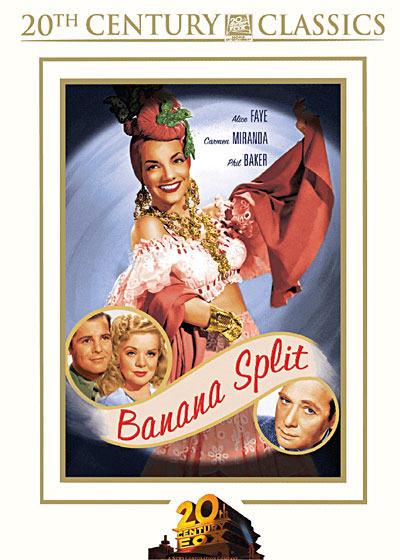 I don't suppose it has any extras...?
Top

David, you want the url of a retailer ?

Lino, there are no extra features. The quality of the transfer alone is worth the prrice, though.
Top

This has to be coming from Fox in R1 soon, doesn't it? What could possibly be the delay?
Top

I'm not sure but I think that the Betty Grable set's underperformance in the sales department (i.e. they didn't sell that many) may be one of the causes why another batch of Fox Marquee Musicals has not yet been announced.

I'm torn. In France, The Nanny, a Sonja Henie title and now the holy grail of Miranda fans have all been released by Fox in stellar transfers and I'm feeling very tempted to push the "achetter" button...

Have all the December titles by Fox R1 been announced yet?
Top

Tom, if you're reading -- do you have this french edition of Sonja Henie's Sun Valley Serenade? If you do, would you be so kind as to post some screen caps?

I've been dying to get my hands on some Sonja (Fox R1, where are you, goddamit?!) and would love to know if the A/V quality of the above disc is worthy of spending some Euros.
Top

Lino, I haven't got Sun Valley Serenade nor any Henie movie. I don't even think I ever saw one (is it a film of hers where there is skating on black ice ?). If you say SVS is a watchable film, even a good one, I might go get it and post caps though.
Top

Yes, there's skating alright! Sonja Henie's movies are terribly unpretentious good fun (as are most of Fox's musicals from the 40's -- and that's why I love them!).

But I was thinking that you might want to rent it first (if such a thing is possible chez toi) and save yourself the trouble of wasting your precious Euros!

By the way, The Gang's All Here is also available from the UK but only as part of a boxset. Amazon UK link. The other movies in the Collection are: ON THE AVENUE, SUN VALLEY SERENADE, DADDY LONG LEGS, SECOND FIDDLE, ORCHESTA WIVES, DOLLY SISTERS, PIN UP GIRL.
Top
Post Reply
24 posts • Page 1 of 1