Does anyone not like Tim Heidecker on at least some level? It seems like he's got boundless career potential that he's just now fully [& unironically] engaging with
Top

I trust that Peele can find something that will something horrifying that fits his brand of acting. I like Tim a lot and I'm interested in seeing what he can do here.
Top

Peele says the trailer is releasing on December 25th. 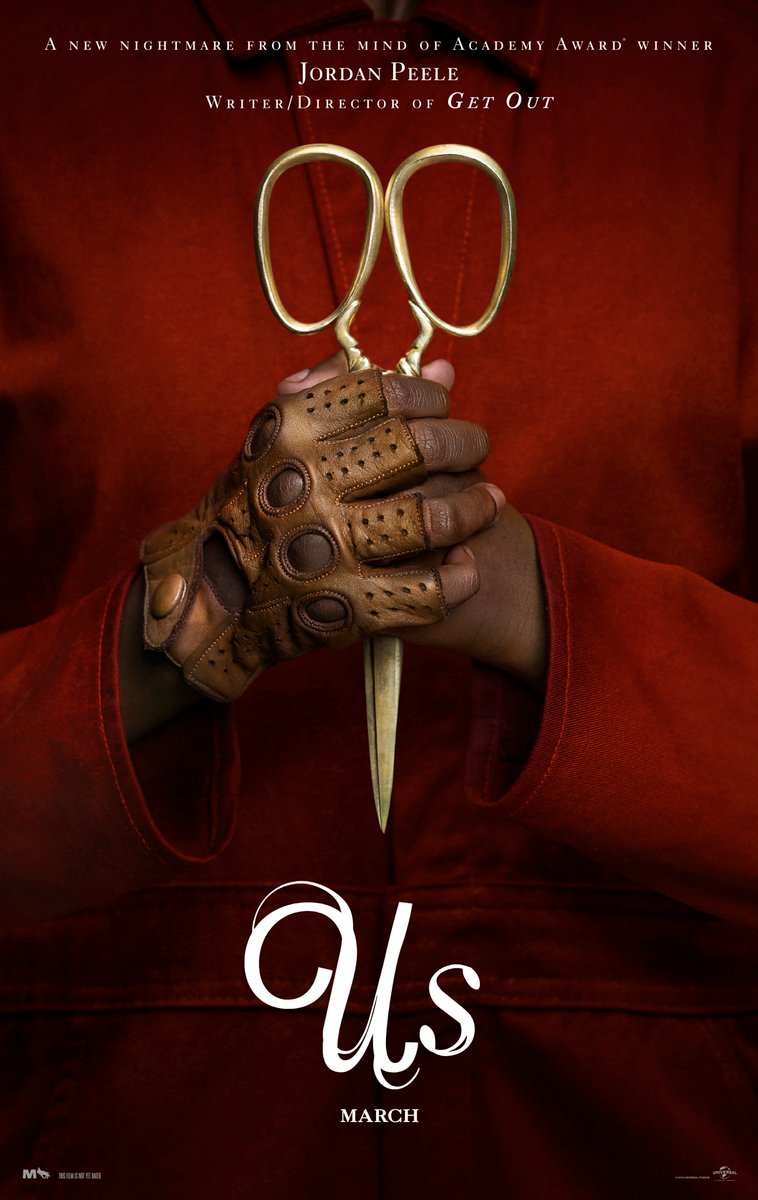 It's a striking poster for sure but I can't decide if those are heads on the handles or the scissors are meant to be phallic or whatnot. The leaked synopsis states this is some kind of invasion thriller. Uninvited guests show up yadda yadda yadda. Makes me nervous about what those scissors will be used for.
Top

Is it a reference to NIGHTMARE ON ELM STREET -- the glove, the scissors (blades), the red sweater....?
Top

Lots of leaks coming out about the film after months of relative silence. It's said to be a more straight-forward horror film without the social messaging of Get Out and has been compared to a specific Hitchcock film
SpoilerShow
the Birds
Top

What domino is trying to say is that this is a stealth reboot of Harvey Birdman Attorney at Law.
Top

MongooseCmr wrote: ↑
Mon Dec 17, 2018 7:41 pm
I’m a bit skeptical about a straight horror from Peele considering Get Out wasn’t actually scary at all

I seem to recall Peele saying this was more of a social thriller. Nebulous genre connotations have let those two overlap and well, I'll wait and see for myself as the trailer drops Christmas Day.
Top

domino harvey wrote: ↑
Mon Dec 17, 2018 2:28 pm
Lots of leaks coming out about the film after months of relative silence. It's said to be a more straight-forward horror film without the social messaging of Get Out and has been compared to a specific Hitchcock film
SpoilerShow
the Birds

I was lucky enough to see the trailer four days early in front of my screening of The Favourite. I think domino's scoop might be an actual spoiler, since I didn't get much of that impression from the trailer. The premise is that Nyong'o, Duke, and their two kids are terrorized by
SpoilerShow
perfect doppelgängers of themselves; as seen in the poster, Nyong'o's double brandishes scissors as a weapon.
I have to assume Moss's casting is an inside joke like Keener's in Get Out, given her role in
SpoilerShow
The One I Love.
Top

Having seen the trailer, I am assuming the relevance to Hitchcock's spoilered film is
SpoilerShow
whatever's going on isn't explained, but like the birds attacking, it just happens, as opposed to this being a monster/disaster movie
Top

My god that looks so good
Top

I Got 5 on It of course referring to paying for half of a dime bag of pot and one half of a greater whole. I would assume it is just being used here innocuously but I'll defer final judgement until seeing it. Looks great though!
Top

Wow there's a lot to unpack in the trailer. Aside from the usage of "I got a 5 on it" referring to having half (also representing a nostalgic song from the past that's no longer appropriate), I see the scissors used to signify two identical pieces that require each other. Also the one hand gloved, as also seen in the poster. No idea about the rabbits, but i assume that will be revealed later like the deer in Get Out.

I think the nod to the forementioned Hitchcock movie has to do with the daytime scenes. (There's obviously a reason behind what's happening) Normally, home invasion movies like The Strangers end when day breaks. In the trailer, we see the carnage going widespread well into the next day and in broad daylight out on the beach. I think Peele is trying to harness that chaos.

Also side note: I noticed Tim Heidecker's children in the film are two identical twin girls, so that might come into play, who knows.
Last edited by Kracker on Tue Dec 25, 2018 8:17 pm, edited 4 times in total.
Top

Casting Heidecker is an interesting choice. He was a mainstay in my High School years but I can't say his brand of humor is necessarily...mainstream? I can't wait to see what Peele does with him.
Top

I should know better than to look at the comment section.

Anyway, I find the beginning rather formulaic but that rapid descent into terror has me hooked.
Top

Big Ben wrote: ↑
Tue Dec 25, 2018 8:03 pm
Casting Heidecker is an interesting choice. He was a mainstay in my High School years but I can't say his brand of humor is necessarily...mainstream? I can't wait to see what Peele does with him.

He's fantastic as a desensitized, trust fund hipster in The Comedy from 2012. It's as far as you can get from the world of Tim and Eric.
Top

This looks interesting, and like it could be quite good. Right away, I think Peele has won casting Lupita Nyong'o, but we shall see. Either way, it looks like Peele has grown as a filmmaker since Get Out and the March release date is certainly interesting, too, especially since this will surely be rated R in the US. I wonder if Peele was able to request it or if Universal put it there since it doesn't necessarily see an awards campaign because of the strong horror elements? Or, maybe Universal is hoping to grab up the Marvel fans in between Marvel movies?
Top
Post Reply
79 posts