Discuss DVDs and Blu-rays released by Criterion and the films on them. If it's got a spine number, it's in here. Threads may contain spoilers.
Post Reply
307 posts
Message
Author 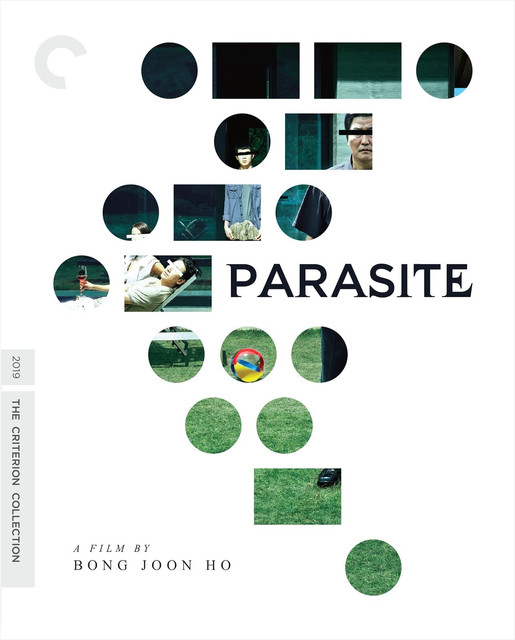 A zeitgeist-defining sensation that distilled a global reckoning over class inequality into a tour de force of pop-cinema subversion, Bong Joon Ho’s genre-scrambling black-comic thriller confirms his status as one of the world’s foremost filmmakers. Two families in Seoul—one barely scraping by in a dank semibasement in a low-lying neighborhood, the other living in luxury in a modern architectural marvel overlooking the city—find themselves on a collision course that will lay bare the dark contradictions of capitalism with shocking ferocity. A bravura showcase for its director’s meticulously constructed set pieces, bolstered by a brilliant ensemble cast and stunning production design, Parasite cemented the New Korean Cinema as a full-fledged international force when it swept almost every major prize from Cannes to the Academy Awards, where it made history as the first non-English-language film to win the Oscar for best picture.

DIRECTOR-APPROVED SPECIAL EDITION FEATURES PLUS: An essay by critic Inkoo Kang
New design by Nessim Higson, based on the original theatrical poster by Kim Sang-man
Top

Yup! The question is: which will feature a chart-topping Aerosmith single?


8. “Parasite”
Director: Bong Joon-Ho (“Okja”)
Cast: Song Kang-ho, Lee Sun-kyun, Choi Woo-sik, Park So-dam
Synopsis: The strange story of two families who mirror each other, despite seemingly being worlds apart from each other.
What You Need To Know: Having consistently staken a claim for being one of the best filmmakers alive but remaining something of a cult item (“Snowpiercer” might have broken him out wider if the Weinstein Company hadn’t virtually buried it), Bong Joon-Ho found his widest audience to date with last year’s “Okja,” arguably Netflix’s best film up to that point, and one that seemed to, somewhat surprisingly given its eccentricities, connect with viewers. After the globe-trotting, VFX-driven, A-list-included adventures of that film, Bong is returning to home for his first purely Korean-language and Korean-set movie since “Mother” a decade ago. While the title sounds like this might remain in sci-fi/horror territory, the helmer’s assured people that there are no aliens involved, and this may prove to be his most domestic film in a while. But with Bong, always expect the unexpected…
Release Date: Neon have already snapped up the rights, so this’ll hopefully crop up in Cannes, where “Mother” and “Okja” both premiered.

Why? When two stylistically and culturally dissimilar filmmakers arrive at a concept independently but simultaneously — as opposed to studios rushing out films with similar concepts to an upcoming release to siphon a few dollars from another studio — it's one of the best natural experiments in filmmaking and opportunities for comparing directorial styles we get.
Top

Just for the inevitable comparisons. I can't wait to see both films.
Top

I was hoping it would be a reboot of this forgotten 3-D classic starring Demi Moore! So disappointing...
Top

I hope this one eventually makes it to Blu-Ray (unlike the presumable never-to-be-released Okja).
Top

There's a thread that you started!
Top

In a weird way the poster is almost more telling than the trailer. Which I can appreciate.

This feels like it could go either way, in that it could be more minor Bong or it could end up being one of his absolute best. I'm also happy to say that it looks absolutely nothing like Us, even on a basic conceptual level. My concerns were unfounded!
Top

Some really strongly positive reactions to this after its first Cannes screening. Ehrlich, for one, says it might be Bong Joon-ho's best.

What great news -- I wonder how long I will have to wait to see it, however.

I imagine NEON will have this out by the end of the year.
Top

Yeah, this seems to be the only other film at Cannes matching The Lighthouse on the rave meter.

I'm beyond stoked. I feel like Bong has made a lot of really good films but I've kind of been waiting for him to make his "masterpiece." Maybe this one will feel like that for me.
Top

Palme D'Or winner! Neon looks like a huge winner grabbing this one and the Eggers.
Top

They did not grab the Eggers, and they’ve been on this for the better part of a year.
Top

You're right. I think I was so excited that Bong won the Palme my brain just pumped out garbled information.
Top

Am I the first person to see this?

It's as polished and provocative as you'd expect from Bong, and I'd place it in the second tier of his work along with Mother. His key theme of ferocious (if not always rational or positive) familial loyalty is here expressed in its most gleefully exaggerated form, without losing the basic reality of the characters. As a satire, it's pretty transparent, and even a little too blunt at times. (At one point there's a literalization of trickle-down theory that leaves the lower classes swimming in shit.) The plotting at times also seemed to me a little overworked, but the converse of that is how Bong blindsides us by abruptly abandoning what's probably the most elaborate and unlikely narrative contrivance, then resurrecting it in a surprisingly moving way:
SpoilerShow
It's the morse code messaging with the flashing light, which Da-Song finally notices and translates, but too late for it to have any impact on the plot. But it finally pays off when Ki-Woo creates the final morse code message which he has no way of sending.
Fine ensemble acting, with Lee Sun-Kyun bringing his ridiculously deep voice over from numerous Hong Sang-Soo films, and Song Kang-Ho being his usual feckless self. The star performance, however, comes from the house, a covetable modernist block set in a small green urban oasis. Bong sets up its geography with great care, then works the hell out of it.
Top

I felt similarly to you zedz, in that there was a lot to admire, and I liked the film quite a bit, but it didn’t blow me away like it did the Cannes crowd. The first hour was the best part, delightful in the set up and very amusing in its humorous jabs at bourgeois social criticism, but other elements in this thematic area were too on-the-nose and the payoff lacked the degree of investment it appeared to be shooting for due to little established value in these explorations (I’ve read comparisons to Chabrol, to which I can see the attempt but the two couldn’t be more different in execution). I enjoyed myself throughout, and watching the formation of the plot unfold over the first hour is worth the ticket price itself, but it’s far from Bong’s best film as some are hailing it to be.
Top

Agree with you both, as entertaining as it was throughout, but I am not sure it achieved the emotional payoff it wanted to achieve. Second tier Bong for sure but that’s still way better than most.
Top

What tier would you put Okja on? (I hope this is better)

I still haven't seen Okja, so your guess is as good as mine!

I'll chalk this Palme up to a well-deserved career award.
Top

Nor have I, but I thought Parasite was better than Snowpiercer and Mother but below The Host. Memories of Murder is still his clear best film for me.

As for the Palme, having just seen Portrait of a Lady on Fire a couple of nights ago, I am not sure how that did not win. It’s admittedly not quite a masterful work, but it is most definitely the work of a (new) master IMHO.
Last edited by nitin on Mon Aug 12, 2019 8:52 am, edited 1 time in total.
Top

I've liked (or loved) pretty much all of Bong's films to date -- but none yet (even Memories of Murder) has topped Barking Dogs....