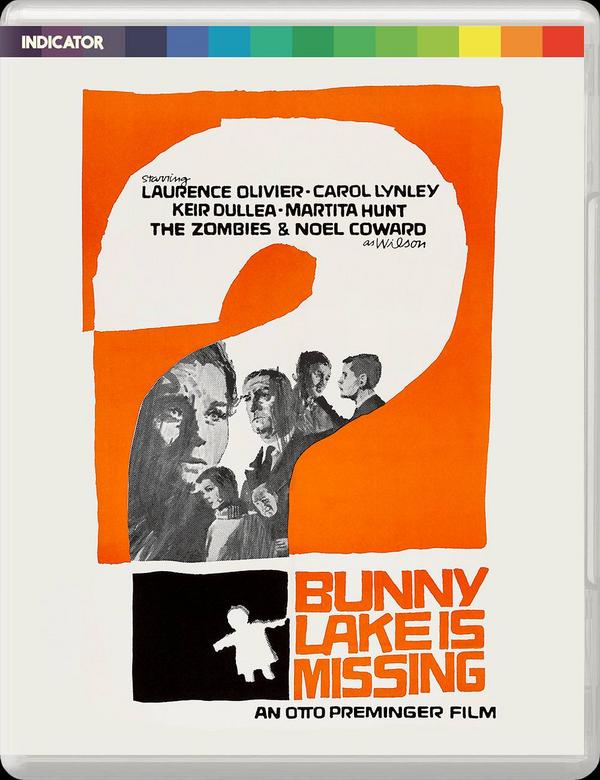 Definitely – no clues!
In this suspense film even one clue might tell all!
THE SEARCH FOR 'BUNNY LAKE’ IS ON!

When Ann Lake (Carol Lynley) arrives to collect her four-year-old daughter, Bunny, from nursery, she is told that no child of that name is enrolled there. Superintendent Newhouse (Lawrence Olivier) is assigned to the case, and before long a number of people are under suspicion, including the child's protective uncle (Keir Dullea), the Lake's eccentric landlord (Noël Coward) and the school's eccentric ex-headmistress (Martita Hunt). However, when he learns that no-one has actually ever seen the child, Newhouse begins to suspect that the young woman may be unbalanced.

This film is a longtime favorite of mine, well before I was even aware of Preminger as an auteur, or a member on this forum, but now viewed in the context of his whole filmography only solidifies its genius. This is Preminger’s nouvelle vague film, a scattered chaos of formalism that dares to posture towards more subjective territory than his usual work, but remains conflicted between Anne’s fervency forcing an retreat from a World Gone Mad, and Newhouse’s neutrality that remains deceptively apathetic under the tempered sobriety to his limitations of control. It’s certainly Preminger’s most cynical examination of civilization, using his foreign milieu’s psychotic instability as a microcosm of the world at large, and also threatens to see intimacy and adoration as only a few notches away from insanity, in the same nebulous cloud of emotion which so clearly rules over logic. The psychological consequence of love's 'yang' is a 'yin' of waking nightmare, and this is foremost an exercise in exhilarating style forging a union with jarring content to produce a psychosomatic symptom of hyperactive alertness through restorative urgency.

Newhouse, and by extension Preminger, may be spared into positions of secure objectivity, but they are fatally safe from a destiny of pain because they don’t play by the rules of humanity's sentimental quicksand. Such a detachment allows them to exist in society unscathed, ironically as ‘functional’ participants who resist a committed intervention that might cause turbulence to their balance, but their self-restraint imbues an invisible sense of loss to contrast Anne’s more violent loss from direct participation, burning herself out in opposing friction with her environment leading to spiritual self-banishment from said space.

One could argue that Preminger is at his most self-deprecating here, recognizing his existential compromise from refusing to approach life and art with intense passion, but he’s also cheekily explaining why he doesn’t in drumming up the mania of our social existence. It’s a lose-lose situation, but by examining the flaws of passivity in Newhouse (significantly not complacency, no one could accuse Preminger of remaining ignorant) and the active love in Anne, Preminger doesn’t even choose a side here in solidifying his own self-reflexive position. This film's world is so unhinged towards hopeless delirium that Preminger's surrogate can't find self-actualization within the context of his own film! As The Zombies' psychedelic pop interrupts the austerity of Bunny's disappearance on the TV, we're not only powerless to change the channel back but we don't even want to, for we feel far more comfortable embracing the mayhem. It feels like home.
Top

This film's world is so unhinged towards hopeless delirium that Preminger's surrogate can't find self-actualization within the context of his own film!

Interesting thoughts blus, watched this for the first time a few days ago and I loved the wild ride, but had trouble taking it seriously as I felt completely engulfed by the delerium and found the twist ending coming completely out of the blue as

SpoilerShow
the real relationship between the central pair seemed completely un-hinted-at until the denouement, unless I missed something. Like "The Shout" which I also saw recently, it seemed to be following the "sub-Caligari principle", i.e you can put absolutely anything in the movie if you reveal the central character(s) to be insane at the end. Don't get me wrong, I love this kind of set-up, but the thrills always come across as a little cheap for me.
Of course, if you go chasing after Bunny, you'll end up going down the rabbit hole, and thats pretty much my (enjoyable) experience here. Actually, several other things in the film - the creepy Victoriana of the doll's hospital, the English setting, the collector of children's nightmares, Coward's outlandish character, the Zombies' pop-psych tunes, made me wonder to what extent the spirit of Carroll (or at least its 60s mirror) was being deliberately summoned from the title onwards.
Top

The twist does completely come out of the blue and makes zero psychological sense, which had prevented me from fully surrendering to the film in the past. However, now I see it as perfect if the film is about that illogical madness engulfing our milieu, and I love how the intrusive and experimental style accelerates as we lose all traction of coherence to our closest predictable markers.

After reading the Fujiwara bio I found it interesting that Preminger had the rights to the novel for years, and went through multiple drafts of script with different writers, all of which were quite different:
SpoilerShow
In the original novel I believe it’s a teacher at the nursery school who wanted a child and kidnapped Bunny. Preminger didn’t like it because the character was uninteresting and the stakes weren’t high enough. They then changed the culprit to a wealthy socialite who paid the nursery school to give her a child, making it more of a system corruption revelation with socioeconomic themes but Preminger didn’t like that either. He actually created the character of her brother who wasn’t in the book at all, their weird relationship backstory, and made him the killer! So yeah, it’s absolutely ridiculous but lends itself to this ethos of the world as insane via the absurd.

Also, as nonsensical as it is for her Stevie to deviate from a man with ego functions to a controlled childlike puppet in the drop of a hat, such a transformation only reinforces the notion that impassioned people are barely hanging onto their sanity- and more hauntingly associates affection with lunacy under a blanket of danger.
Top

It is definitely a movie that I have enjoyed more with each successive viewing, (and I liked it to begin with) perhaps because I am no longer focused on the plot or the twist. Not viewing it at as a puzzle to be put together, but as twbb so aptly put it, surrendering to the film’s own particular brand of madness, grotesquery, and beauty as well.

Stories where characters disappear and are treated like they never existed by everyone but the protagonist hold a special fascination and horror to me, like the many variations of the vanishing hotel room legend. I can think of nothing more scary than that (except maybe for your loved ones suddenly not knowing who you are), that feeling of isolation, frustration, desperation and doubting your own sanity. Bunny Lake is Missing, more than any movie, is drenched with that feeling of unease and uncertainty. The only there film that has given me the same feeling, The Snake Pit, particularly the scene with Olivia de Havilland in the kitchen. I know it’s not necessarily how it works, but the thought that one could, suddenly, lose your mind freaks me the hell out.
Top
Post Reply
5 posts • Page 1 of 1