senseabove wrote: ↑
Thu Jan 14, 2021 6:37 pm
I'm certainly happy to see y'all break the "rule," whether it was ever established internally, publicly stated, or just all in our heads. And to that point, I can't seem to find any mention from you of that rule being a rule, but a quick search of the speculation thread turns up lots of people mentioning it, so I have to imagine it was stated a little more clearly somewhere...

MichaelB, from Facebook, admittedly back before they released Ninety Degrees in the Shade:


As for non-English-language films, the current policy is to stick with exclusively English-language films, but never say never. As it happens, there's an upcoming Indicator title that will be presented in two distinctly different versions, one entirely in a foreign language, since it was an international co-production that was shot twice over with actors speaking the relevant version's language whenever possible (so we're talking visibly different takes, a more complex situation than a mere dub), and as luck would have it the licensing deal included the rights to both versions. But since the film is much better known in the English version (thanks to most of the leads and the scriptwriter being British), it's not quite the same thing.

So not necessarily a hard and fast rule, but certainly an implication. And I'm sure it wasn't the only one. I don't think it's unreasonable for us to raise an eyebrow about this.
Top

Chabrol was literally the first thought that passed my mind. Somebody please give me The Hatter’s Ghost.
Top

Hell, if this gives enough to grease the wheels for whatever muscle is holding up California Split, it's a win
Top

Did the German release from last month (compared here) use the same 4K restoration? Looking at the screenshots I couldn't believe it's a new 4K scan. There's practically no improvements on previous transfers.
Top

I'm strangely encouraged by how repeatedly unacknowledged this question is here and elsewhere...

It was mentioned in the Indicator podcast interview released late last year that they've decided to start branching out into non-English language films.
Top

andyli wrote:Did the German release from last month (compared here) use the same 4K restoration? Looking at the screenshots I couldn't believe it's a new 4K scan. There's practically no improvements on previous transfers.

I haven’t seen either the German release or the master that Indicator will be using, but bear in mind that this film was shot on Super 16, so there’s an absolute upper limit to the amount of detail that can be extracted from this material.
Top

Fair point. At least I can trust Indicator to have rendered the grains better than appeared in those German screenshots.
Top

andyli wrote:Did the German release from last month (compared here) use the same 4K restoration? Looking at the screenshots I couldn't believe it's a new 4K scan. There's practically no improvements on previous transfers.

I haven’t seen either the German release or the master that Indicator will be using, but bear in mind that this film was shot on Super 16, so there’s an absolute upper limit to the amount of detail that can be extracted from this material.

True, but I have a pretty good feeling what Super 16 grain might look like... and whatever the German/French release has delivered unfortunately doesn't look like it. Instead it looks harshly digital, with clumpy, processed approximations of what once was grain.
Top

Someone on the blu forum emailed Indicator about the transfer, and apparently there is no 4K restoration for it and it seems like they will use the same transfer from past releases.
Top

I regret not seeing the re-release in theater to have gauged what was shown there but the comparisons I saw indeed look like the original cut is pretty much the same old source and that the new cut is using the same digital master as a source since they all are sharing the same "pixels", which seems unlikely if the workflow went back to the film elements.
Top


As you may be aware, during the past month or so there have been some problems with the Amazon listing for our forthcoming IRREVERSIBLE Limited Edition. We're extremely pleased to announce that these issues have now been completely resolved.

Additionally, some news on the restoration: following conversations with Gaspar Noé and Studiocanal, we have confirmation that the feature presentation is not from a 4K restoration, as was previously announced, but rather a 2K one. The film was originally post-produced at 2K (meaning a true 4K version will never be possible). The restorations of both cuts of the film were prepared in 2019, with Noé himself overseeing all aspects.

Final specs for IRREVERSIBLE will be announced very soon, including a number of exciting new additions. We are extremely proud of the work that has gone into making this release as good as it possibly can be, and we can't wait for you to see the results. 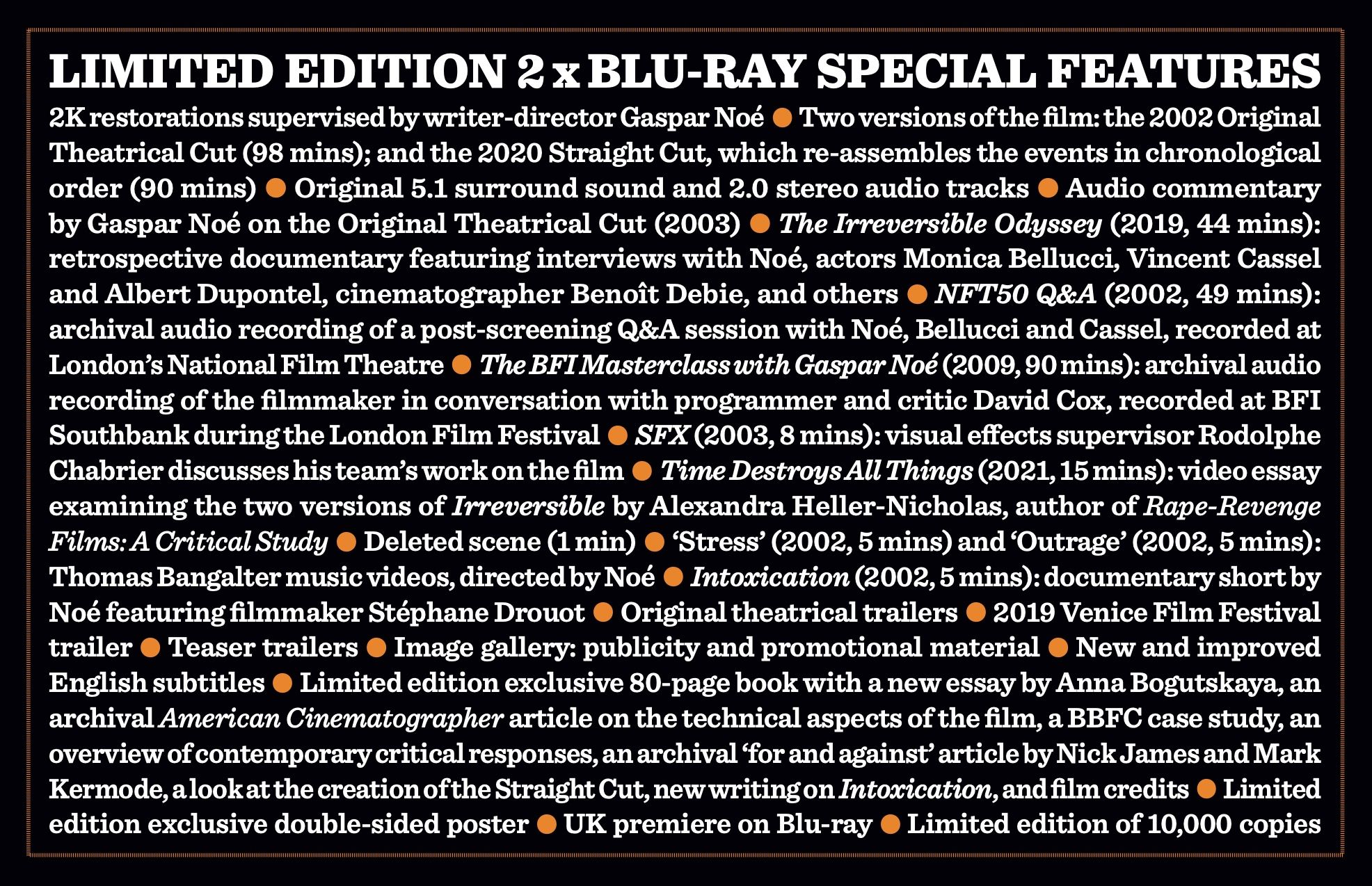 The reds really pop in the subway scene. Regardless of my disdain for the film, this looks pretty impressive.
Top

The reviews seem to tiptoe around it, but I still think the transfer looks absolutely terrible compared to what would be possible with a halfway decent scan of a film of that vintage. Oh well, seems we're not getting anything better.
Top

Wasn't this shot on Super 16mm? Would a 4k scan really have made a discernible difference (the fact that Indicator didn't commission a 4k scan seems to suggest it wouldn't have, or it was outside of what they could realistically afford)?

Michael's technical reasoning seems a plausible explanation about what happened there : basically, the film is stuck to its 2002 scan and digital post-production and something better than this is unlikely to appear except going back to the 16mm elements, re-scanning them and re-doing the whole post production (which is unlikely to happen).

Come to think about it, I guess it's just a movie from this intermediate HD-finish era in ths 2000s, where the industry was moving into digital post production but a technically limited one.

But yes, otherwise, a new scan would certainly have yielded a finer result, even simply at 2k. There are now several 16mm restorations showing how beautiful it can look once newly and properly restored.
(NB : the "restoration" work was done by/for Studio Canal, I don't think there's anything Powerhouse could have done there)

mhofmann wrote: ↑
Tue Apr 20, 2021 3:55 pm
The reviews seem to tiptoe around it, but I still think the transfer looks absolutely terrible compared to what would be possible with a halfway decent scan of a film of that vintage. Oh well, seems we're not getting anything better.

Talking about "a film of that vintage" is pretty meaningless in this context, because in terms of source medium Irréversible isn't really a "film" as such - or rather, while it was originally shot on Super 16mm, the entire post-production workflow was carried out digitally at 2K, using twenty-year-old technology and algorithms, and all subsequent release versions (35mm, DVD, BD, you name it) ultimately came from the same digital interpositive. So in terms of the Indicator catalogue, the only really viable comparator is something like The Pillow Book, which also betrays the limitations of the technology on which the post-production was carried out, and which also cannot be measurably improved without essentially reassembling the entire film from scratch.

A new scan of what, though? Even if the original 16mm rushes survive, which is by no means a given, you'd have to redo the entire post-production, including re-rendering all the special effects (which include the seamless digital stitching-together of dozens of shots to create the impression of only a handful of very long ones). With the best will in the world, that simply isn't going to happen, any more than it's going to happen with The Pillow Book - if it was a viable option, Noé would undoubtedly have taken it in 2019.
Top
Post Reply
96 posts