Discuss DVDs and Blu-rays released by Criterion and the films on them. If it's got a spine number, it's in here. Threads may contain spoilers.
Locked
1 post • Page 1 of 1
Message
Author

By request, here's a brief rundown of some of the most prevalent board inside jokes and oft-repeated references. Some of these are pretty old but could still pop up to confuse a new member when doing a board search

A Brief History of the Forum
This forum you’re reading right now is only the latest and longest lasting version of the Criterion Forum message board. For a brief history of the forum, read Matt's summary. For a peek at how things used to be, use the Internet Wayback Machine to see a few sights!

Alan Clarke’s Number One Fan
Alan Clarke was a short-lived member of the forum who claimed to be the biggest fan of the director Alan Clarke despite only having seen two of Clarke’s films. When other members, including several producers of the then-forthcoming BFI boxed set, tried to point out the obvious flaw in logic, Alan Clarke the board member lashed out with veiled threats of violence and wrote of having to go work his aggression off at the gym after hearing the set would be delayed by approximately a week. He may still be there now, lifting weights and dreaming of the day he sees a third Clarke film and thus finally ascends to becoming Alan Clarke’s Living Embodiment on Earth. We’ll never know, though, as he was banned for harassing said producers and other members. Since literally all of his posts were about the Alan Clarke BFI box, you can browse his collected writings here. If you see reference to someone being the biggest fan of (insert filmmaker here) despite having only seen two films, either they’re referencing this incident or the call is coming from inside the Alan Clarke-- grab the kids and get out of the Alan Clarke!

Armond White
Armond White is a former critic for the New York Press currently writing for National Review. Despite being commissioned in the past by Criterion for supplemental essays, he quickly proved himself to be idiosyncratic in his tastes to the point of obvious contrariness, and gained wider infamy outside of the board for his Rotten Tomatoes-wrecking disses on widely loved films. Less relevant than ever, he still plugs away and is the go-to joke for anyone taking an unusual stand. We still track his idiocy here.

Barmy Audience Reactions
Barmy is a former member who often bragged about poor theater behavior, claiming to fall asleep during “boring” films and loudly booing and laughing derisively at the screen. What’s worse, wherever Barmy went, audiences seemed to echo his own bad habits, thus claims of the “whole audience” sharing whatever his vocal boorishness conjured up. Fun fact: Barmy also once promised to quit the forum if Cate Blanchett was nominated for an Oscar for I'm Not There, though his eventual banning was for something else years later.

Border Radio
Forum jokes about Border Radio being an unpopular release have been prevalent ever since the film was announced. Those unlucky enough to see the film only added fuel to the fire by being able to confirm first-hand what was already surmised. Shortly after release there was an Amazon glitch that priced the DVD extremely cheap. Even then no one bit. The Criterion release has become shorthand for comparative unpopularity and poor sales, and along with the Norman Mailer Eclipse set is widely regarded by forum members as the worst Criterion release of all time.

the Dot Com Forum
Back in the day, there were two competing Criterion Forums, this one and the criterionforum.COM. Though each shared a handful of overlapped members, both had a different take on film love, with this forum more geared towards experienced viewers and the Dot Com forum devoted to a lot of listing and “Today I bought this” posts (see: Blu-ray.com’s forums for a good look at what this was like). Eventually the Dot Com forum moved to a slightly different URL and became small enough to ignore rather than engage against. In reality, members of the other board were perfectly nice people, but suggestions that a user here should go post on the Dot Com forum meant they weren’t a good fit here— it was the “Oh Snap” of seven years ago.

Double Newsletter Clues
Every month, Criterion sends out a newsletter with a cryptic little doodle teasing a future release. And every month, the board continues to guess possibilities even once the obvious answer is arrived upon. Many members will even claim the clue could be a fabled "Double Clue," hinting at two films in the same cartoon. However, even if this has ever happened, it's never happened.

DVDBeaver and Nudity
Up until recently, Gary Tooze at the DVD reviewing site DVDBeaver could be counted on to include at least one screencap of nudity from any film he was reviewing as a sort of classy Mr Skin-style touch. Speculation abounds that he stopped at the insistence of the studios sending him free review discs.

"_____'s face when they see this thread" + a picture of Hou Hsiao-Hsien
At the height of the Assassin's release, long-departed user Trees often posted pictures of Hou Hsiao-Hsien (though sometimes he expanded to other celebs), along with some variation of the caption "Hou's face when sees this thread," with the facial emotion depicted a response to whatever discussion was under way. Most users' faces when they saw these posts: 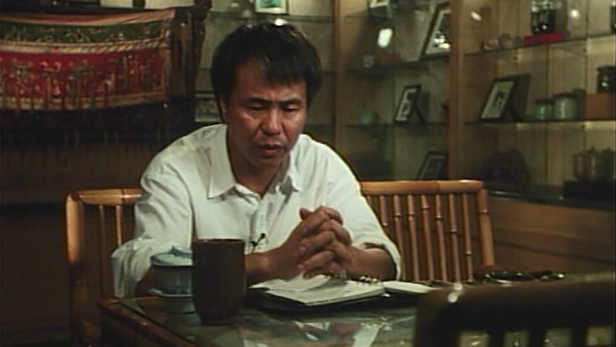 Ill Sore Possum
Newsletter clues bring out the best and worst in the forum, though usually we can all agree once the best-fitting answer is arrived upon. That was not the case with this contentious doodle: 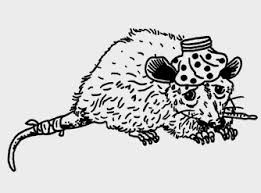 Users initially IDed this as a clue for Midnight Cowboy, with the sick rat pictured being a stand-in for Dustin Hoffman’s sickly Ratso Rizzo. However, when Midnight Cowboy remained unreleased countless months after this clue, some decided the clue meant something far more insidious: ”Ill sore possum”, which somehow formed a clue for Il Sorpasso. This is still a hotly debated topic on the forum, and while as in the white & gold / blue & black dress controversy there is no right or wrong answer, the right answer is that this isn’t a clue for Il Sorpasso, even if it is.

InterFilmArt
InterFilmArt Entertainment is a theoretical home video label that gained notoriety on the board and elsewhere for promising several deluxe editions of films focused on Nazi Germany and the Third Reich, such as Triumph of the Will. When several posters suggested this label (and its hypothetical releases, which were initially offered as pre-paid pre-orders for exorbitant prices) was just a front for someone taking advantage of neo-Nazis and/or film lovers with big pockets, InterFilmArt proceeded to threaten legal action against seemingly everyone on the forum. Most were not deterred.

SpoilerShow
Joe Eszterhas comes again
Twilight Time once teased one of their forthcoming Blu-rays with the enigmatic clue, "Joe Eszterhas comes again," which was just cryptic enough to mean anything. After many wrong guesses, the clue was revealed to be for Born Yesterday. This was such a monumentally bad and confusing clue that it quickly became the go-to joke to make when other labels hint at their own upcoming releases. But other labels may rest safe, as there cannot conceivably be a worse clue than this (for anything, ever).

Kevyip
Kevyip was a user who joined the board and almost immediately unleashed his self-righteous rage at others owning movies they had not seen yet. He went on about it with such an absurd fervor that users began referring to their own unwatched piles of movies as their “kevyip.” It even made it to Urban Dictionary!

Member of the Year
In addition to airing our usual gripes and praises for Criterion's best and worst, the board votes annually for the member who contributed the most to the forum in the past year. In the wake of swo17’s record-shattering back to back Tom Hanksing, past winners of the award generally encourage voters to spread the wealth to other deserving members, though there is nothing preventing swo from winning every year if you don’t do your part to improve the quality of the posts here!

Nothing is Thomas Clay
A popular board theory holds that former user Nothing was actually the anonymous mouthpiece for director Thomas Clay (Soi Cowboy, the Great Ecstasy of Robert Carmichael). Among the compelling evidence for this was Nothing’s unchecked vitriol for every director who garnered more attention than him at Cannes and his claims that Clay’s films were far more beloved and important than reality bore out.

Richard Cranium Award
A voting category in the yearly board wrap-up awards, this distinction honors the user who most acted like a Dick (Richard) Head (Cranium).

Richard--W(omen/esterns)
Richard--W was a member who objected to domino harvey’s focus on the roles and depiction of women in the Western genre during the first Westerns List Project. That he believed domino harvey was a woman played a large part in his objection to him (her?) speaking on the subject. Richard--W wanted to make his own competing Westerns List Project free of the fairer sex and when he was denied, he threw a tanty and was banned. It was later discovered that Richard--W had and has a long history of posting absurdly offensive statements on other message boards.

Special Ranks
Some members have additional text beneath their user names, known in phpBB as “special ranks.” These are mostly based on inside jokes, many long forgotten, and were granted to members by the administrators (Chris or Matt) at their whim. Fun fact: domino harvey’s special rank has nothing to do with the Dot Com Forum (and please stop calling him “Dom”). Don’t feel too bad if you don’t have one, there hasn’t been a new special rank granted in years. 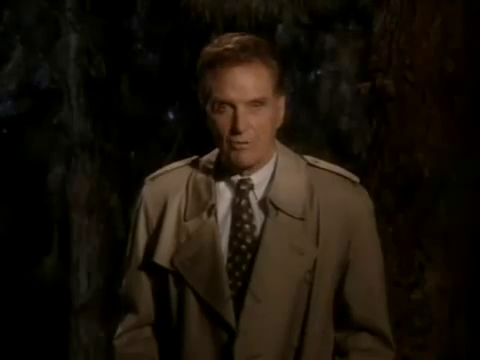 As of the summer of 2018, special ranks have joined the likes of other comeback nostalgic cashins like Cheetos Paws, Crystal Pepsi, and open racial hostility in American politics. See this thread for more information on how to acquire one

Swimminghorses Covers
Back in the early days of this forum, many users were obsessed with making fake Criterion covers. Almost all of these were terrible, but special attention was afforded to user swimminghorses, who crafted MS Paint-aided disasters that made him our very own Tommy Wiseau of DVD art. Peruse his collected works here.

Tamara
Tamara was a Criterion employee who started directly responding to emails sent to Mulvaney. This being a predominately male forum, (mostly joking) amorous attention was projected on her. She eventually either stopped talking to us or got another job (or both).

u know how old movie go with acting
The wisest words ever written about film were penned by Jennifer L in a review for Flixter and relayed by member Musashi219 in the ‘Rediculous’ Customer & Critic Reviews thread. This sage epigram found such favor on the board that it even briefly (like, maybe for fifteen minutes) appeared as part of the forum header, though it lives on forever in our hearts and our references.

Voting for Deadwood Season One
Jokes about voting for the first season of Deadwood for any balloted list originated from the colorful complaints lodged by user Nothing during the Westerns List Project. Despite the clear disconnect between voting for a season of a TV show in a list of movies, Nothing insisted for pages on end that he should be allowed to vote for the series.

If you have suggestions for inclusion, please PM domino harvey