Was skimming through Ephraim Katz's The Film Encyclopedia (found at a tag sale), and found these valuable insights:

And some of you think Deville's been critically neglected!

Another acknowledgment to the existence of Tendres requins.. the one that got away
Top

Fashionably late to the party (no pun intended) as per usual, but Ce Soir ou Jamais is just as dizzyingly delightful as has been previously reported. Deville’s total drawing of the viewer into the collective offbeat interactions of an ostentatious group of show-offs (and incidentally, my feelings towards the milieu of “theater kids” have been forever altered by this film) is masterful, at times provoking in me genuine feelings of awkwardness when I realized I was missing information about someone offscreen or when certain characters erupted into self-serving tangents or tantrums (thinking especially of Françoise Dorléac’s explosively indignant exit from the movie, which surely belongs next to DRAIIIIINAGE on some sort of all-time list of angrily comic film rants) when not fascinating me with knotted-up conflicts like the two duelling and rather sad romantic gambits, each of course born of a misunderstanding of the other partner’s feelings. I know some upthread have mentioned their cynical, even Sartrean interpretations of the function of the social group, but I thought the film’s ultimate message was warmer than one of meaningless interaction given meaning and blunted of sadness through different types of adversity. The group’s interactions are often absurd and self-serving and frequently the cause of their own problems through everyone within’s imperfect understanding of each other (and again, nowhere is this more apparent than the romantic tension and one upmanship of the two leads), but these large and small annoyances are also what bind the group together through these same competitions for attention and affection in ways that ultimately harm no one within the group and indeed usually grant them their non-problematic desires. I don’t think I’m alone in recognizing these same purposes, behaviors, dynamics, and feelings in real life (or, at least I don’t think I’m alone in doing so on this forum, given how difficult it is to see this...), and what a great film it is that can so precisely depict all these things while poignantly replicating the experience of engaging with them in real life. Isn’t that why we watch movies?
Top

Great thoughts, Never Cursed. Not sure if you were referring to my post way back about Deville touching on the meaning/meaninglessness of the social experience, but just in case to clarify I was referring to inherent absurdity (i.e. objective meaninglessness), and noted that it's definitely posturing at a variety of different emotions and repurposing very real social discomforts into empowerment that provide subjective meaning. The context of my reading was in response to other Deville, particularly L'Apprenti salaud, where he throws in some sobering moments of isolation that -in instants absent from distraction- intrusive questioning of the meaninglessness of life occurs for characters suddenly feeling the impact of solitude even when surrounded by others, which casts a light on why we seize and project meaning into ours. I guess a better way to say this point is- as you allude to at the end of your post, he leaves room for all experiences of individuals coexisting in social contexts, across the spectrum from vibrancy and harmony to detachment and meaninglessness. I definitely didn't read the film as so definitively optimistic in its thematic intentions as you did, and saw it as more of a presentation of life on life's terms, which is pretty glorious and life-affirming even if there is harm or hard truths of less unity than one might see at times (the Sartre illustration is merely to affirm the conscious or otherwise mini-existential crises one feels in response to social comparisons on a regular basis, rather than to profess any staticity of said fleeting dysphoria). What I think Deville understands better than most filmmakers (and people) is that perspective is the only key objective truth that defines experience, and it wavers constantly. The optimism, here and in his other work, is that people will be happy and bind together and avoid 'real' harm, and yet they will also feel 'real' internalized harm (just as debilitating as observable pain in his worlds), be miserable, and completely disconnect. But the cycle will go on, if you can even simplify it into a cyclical pattern when he throws every emotion like paint on a canvas.
Top

Who’s ready for a merry Christmas? The subtitler for La divine poursuite messaged me to tell me their subs are finished and just need some proofreading, so they should be available very soon
Top

I've just had a skim through them and the grammar and everything looks OK to me but it'll be a few days before I get chance to watch them with the film (and my French is worse than terrible) so I guess someone else will do the proper proofread.
Thanks to everyone on this thread for their informative and passionate writings on Deville which has made for great reading. I did sample a fair handful of the films and though I must confess I wasn't entirely "convinced" and I certainly haven't discovered a new favourite (unlike Michele Rosier, whose few available films I discovered for myself and absolutely loved this year). I did very much like Lucky Jo, La Petite Bande and L'Apprenti Salaud and will be sure to check out some of the others.
Top

Wow, didn't realize he'd already posted them in the proofreading thread over a week ago, thanks for the heads-up! 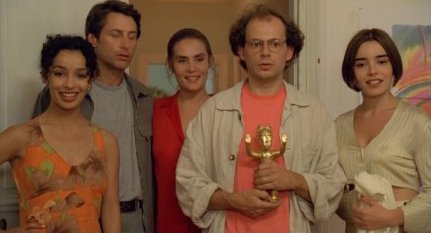 Sandwiched between a string of mostly successful works dense with complex moods (excluding Aux petits bonheurs, which remains unsubbed at the time of this writing), this is a return to form for Deville reviving the puckish tone of his 70s comedies. Right from the credits sequence, Deville imbues his playful use of technique, fiddling with the possibilities of blocking and lighting as people unexpectedly emerge from shadows and the constant camera movement guides over to various characters doing nothing. Ironically this exuberance occurs after a robbery while the subject complains as he remains inactive, but set to a rhythm that seems fit for the robbery itself! This then follows the mold of a self-conscious screwball comedy, taking not a supporting character but an extra’s role of box-courier and making him the lead, along with a decent-sized group of Joe Schmoes, on the tale of a fiery enigmatic Emmanuelle Seigner- and subverting expectations by delaying their union for far longer than expected! I enjoyed the subversion of gender norms in various power dynamics that Deville has explored before, particularly emasculating the men (poor Denis Podalydès, between this and My Sex Life, he’s having a rough go as the mid-90s French cuckold) and giving the women a cool patience and confident attitude without necessitating them to hype their energy or compromise their personalities.

For everyone that hates It's a Mad, Mad, Mad, Mad World and its quasi-remake Rat Race, this film is the funny, inspired version told through an economic series of incessant gags. Over the course of the narrative so many silly characters are introduced and cross paths that this becomes little more than a playground for Deville to experiment with action-based comedy and observational social humor using his expertise in form. Along with borrowing from Keaton’s silent cinema (Podalydès, in particular) and the early Hollywood sound comedies, Deville employs some witty nouvelle vague editing styles into setpieces at random, as well as formulating a last act that emulates Hitchcock’s spy adventure films (I also love his unique 'wipe' transitions using his camera to scan across several areas of a scene and into another one seamlessly). I’m not convinced this is as good as Deville’s 70s gems, and its ideas are as clear as the pool salesman’s face under his stupid “mask,” but I had a blast with the inane visual repartee flooding the screen at all times, and can confirm that it’s certainly his last work of comic genius. Another addition to the list of great comedies.
Top

Fun fact I learned today: Benjamin was the first X rated film ever released by Paramount in the states
Top
Post Reply
109 posts