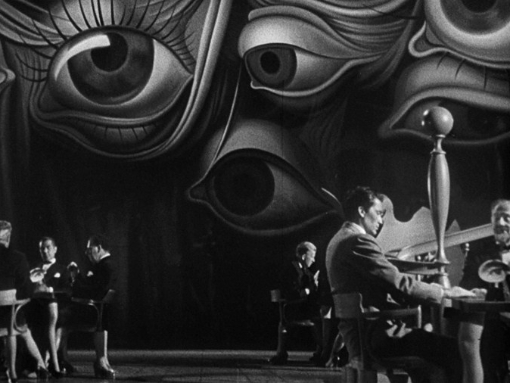 Dr. Constance Peterson (Bergman) is a dedicated psychiatrist who puts all her passion into her work - until she falls in love with Dr. Edwardes (Peck). Unfortunately, it soon becomes clear that Edwardes is an impostor - an amnesiac - who may or may not be a cold-blooded murderer. Pursued by the police, Constance must decide whether to turn in her mysterious lover.or risk her life by trying to unlock the dark secrets in his mind.

Spellbound comes to Blu-ray in its original aspect ratio of 1.33:1 on this dual-layer disc with a 1080p/24hz transfer, and similar to MGM and Fox’s Blu-ray for Rebecca it offers a nice, filmic image. The transfer is consistently sharp when the source allows, which means some of the finer details, like the many fine parallel lines that cause Gregory Peck’s character to have mental breaks, are cleanly defined. Those responsible for the presentation have taken a fairly hands-off approach and have left film grain intact along with some of the more minor bits of debris that remain. Gray levels look really good and blacks are fairly deep but not overly so.

The print used is in decent shape, though not perfect, probably about the same condition as what Criterion’s DVD presented. As mentioned some smaller bits of debris remain and there are a few scratches that appear and even if the damage is noticeable it never gets too bad. The frame can go a little soft at times, as if out of focus, but I suspect this is an issue with the print and not a problem with the transfer. But even if the restoration doesn’t offer a big improvement over previous DVD editions the transfer itself, which is far sharper and cleaner, certainly does. 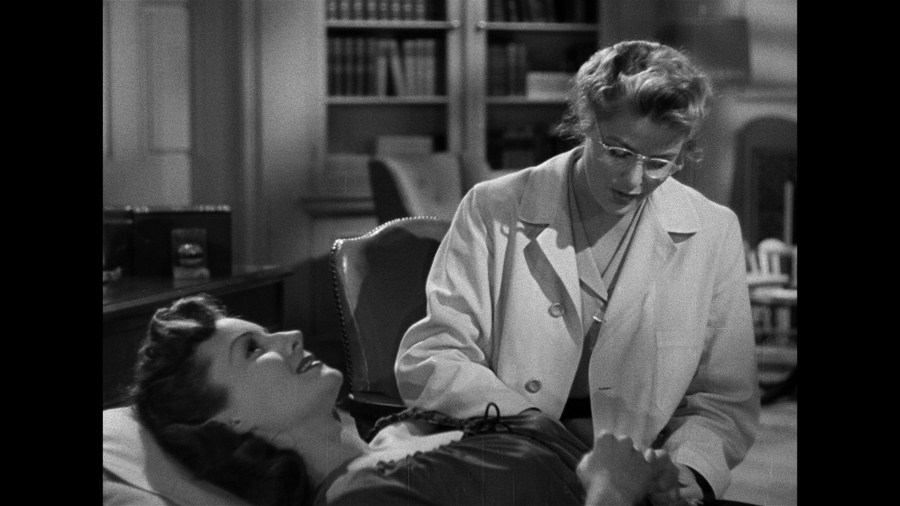 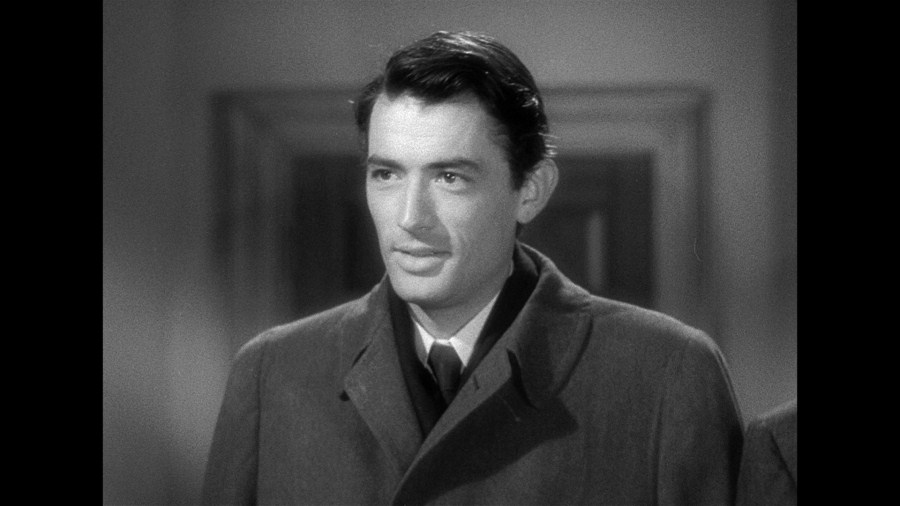 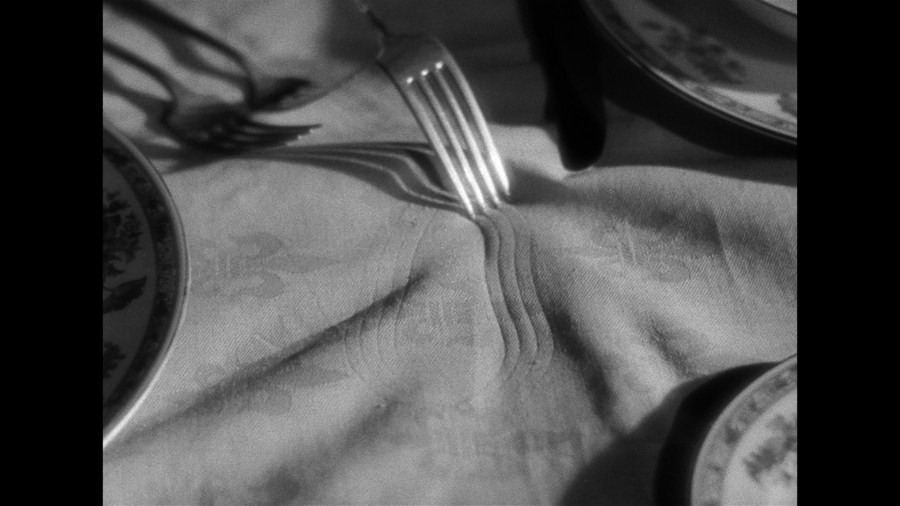 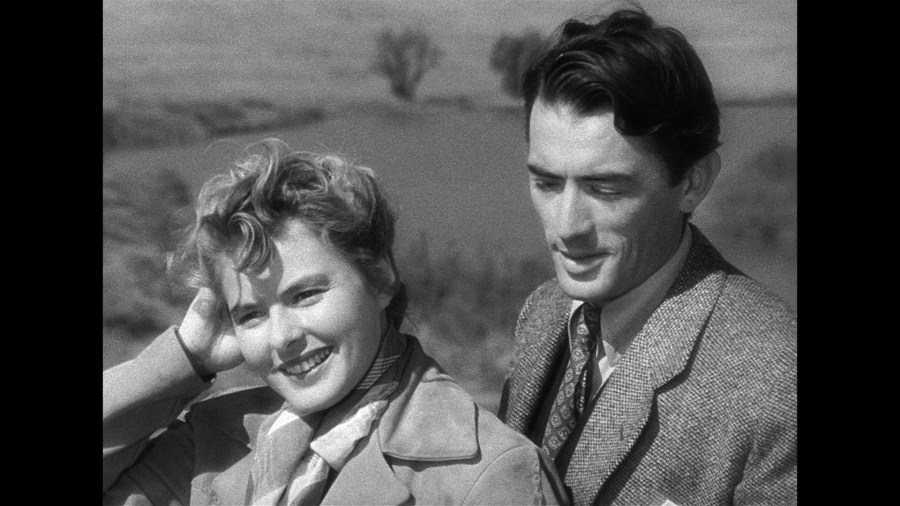 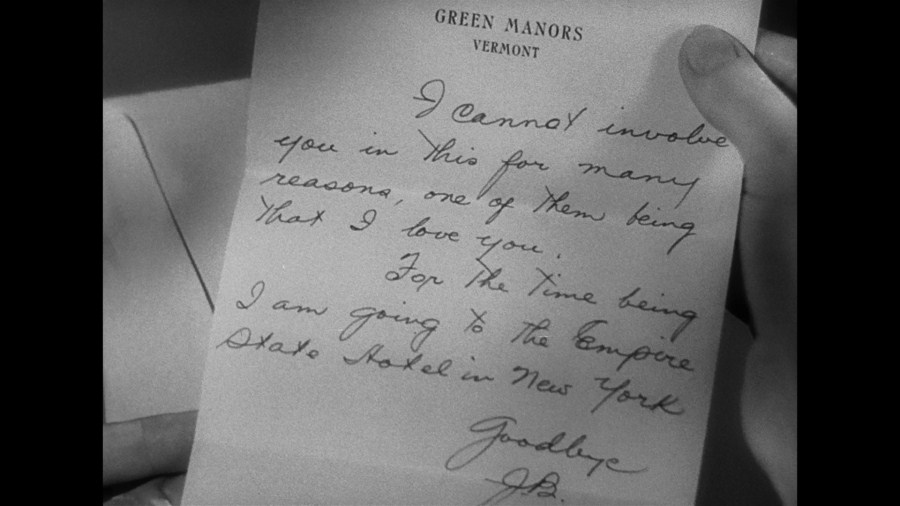 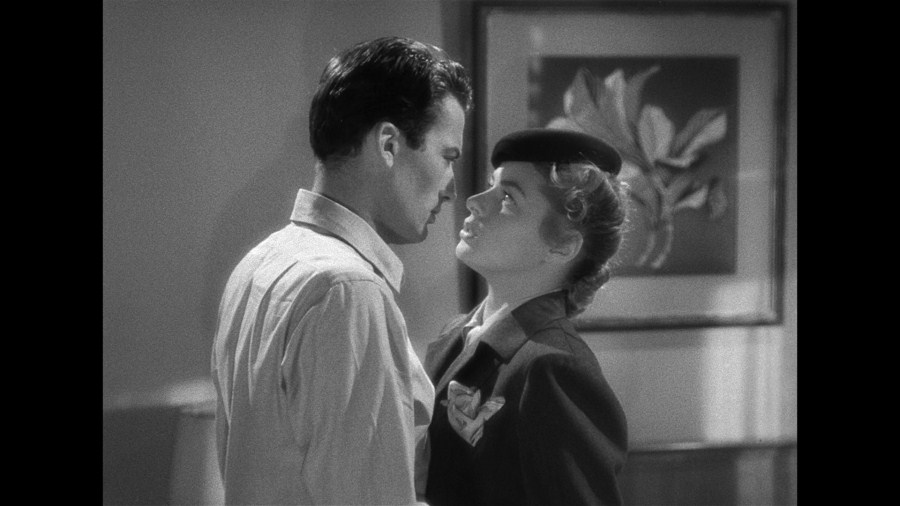 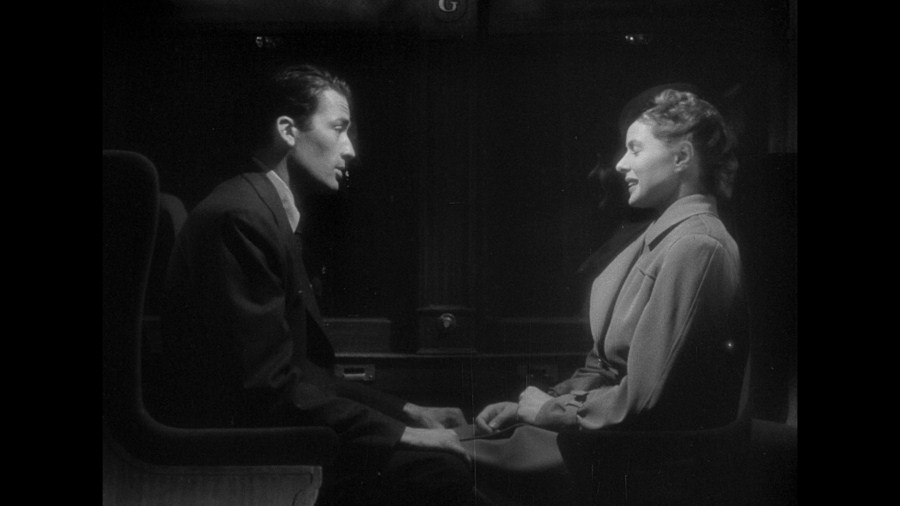 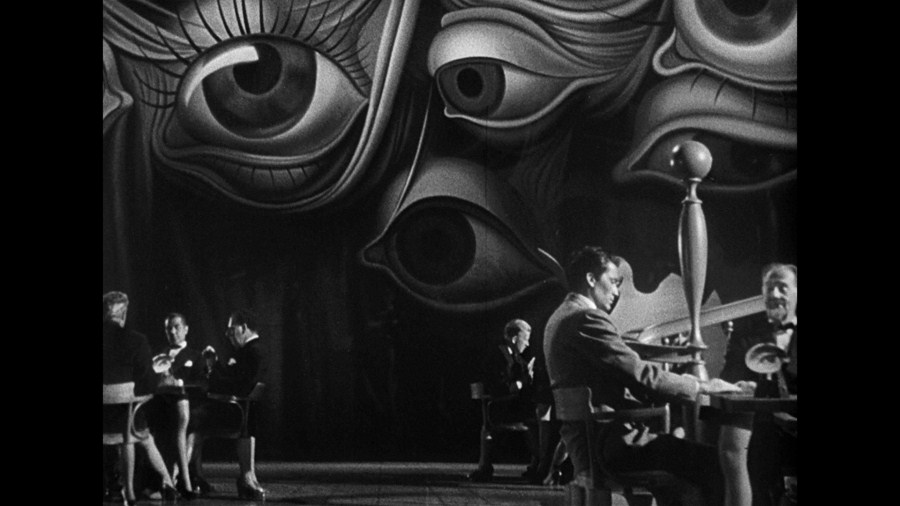 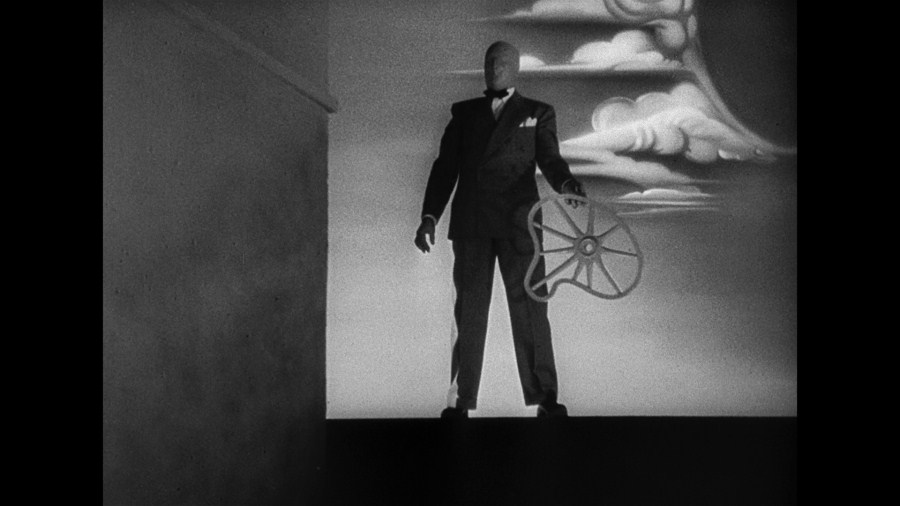 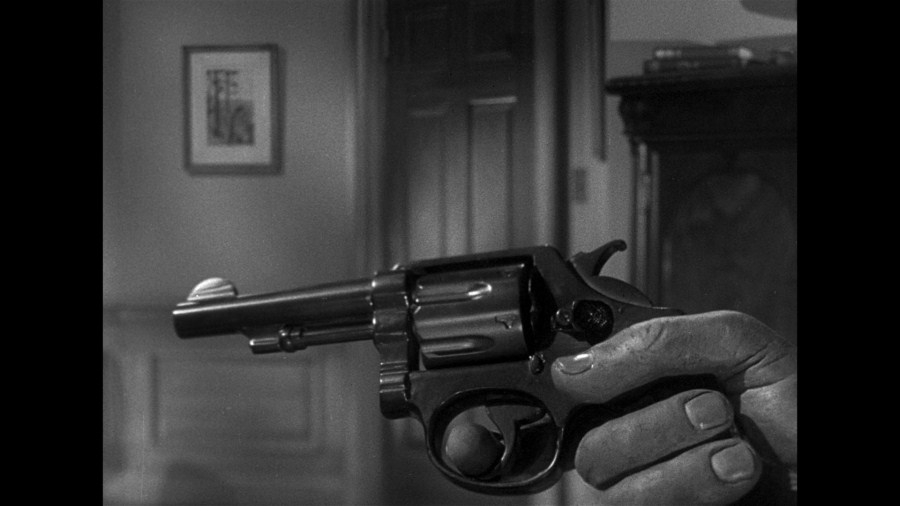 The 2-channel DTS-HD MA mono track also sounds pretty sharp. There’s some minor noise in the background but it’s strong, with clear voices, and decent sounding music that gets a little edgy at times. It shows it’s age in some regards but in general it sounds clean and is easy to listen to.

Criterion had previously released the film on DVD in an impressive special edition that this MGM Blu-ray unfortunately can’t rival, but it still offers its own unique look into the film’s production.

First is an audio commentary by film professors Thomas Schatz and Charles Ramirez Berg. I don’t remember Marian Keane’s commentary from the Criterion edition but considering how I usually feel about her tracks I wouldn’t be surprised if I did find this one better. Still, it’s not an overly engaging track surprisingly, especially when one considers we have two commentators recorded together who do manage to keep it going. I guess the main problem is they don’t really cover anything we haven’t heard about Hitchcock before. They talk about Hitchcock’s techniques from lighting to point-of-view shots, and how he’s able to make things that aren’t sinister sinister. This is all well and good I guess, but I didn’t get anything surprising out of it and it feels as though it’s going through the motions. There’s some interesting comments about plot structure, the dream sequence and its making, and a lot of anecdotes about the production, but this material is covered in other features on the disc. It’s fine, and at least more engaging than the commentary by Richard Schickel for MGM’s Rebecca Blu-ray, but not one I’d say is a must-listen.

Moving on to video features, and the stronger portion of this release, we first get the 20-minute featurette entitled Dreaming with Scissors: Hitchcock, Surrealism, and Salvador Dali. This piece looks extensively at the famous dream sequence in the film that was designed by Dali. It goes over Dali’s early career, his collaborations with Luis Buñuel, and then his work in Hollywood. It goes into great detail about some of the issues that arose, specifically Selznick’s concerns with the sequence (it sounds like he didn’t really like the sequence and only wanted Dali attached to the film for the free publicity it would bring) and it also goes over some of the deleted material, some of which was filmed but is now lost. I prefer the multimedia essay Criterion had on their disc for this sequence, which really got in-depth, but this video featurette offers a decent history of it.

Guilt By Association: Psychoanalyzing Spellbound is another 20-minute featurette which looks deeply at the films presentation of psychoanalysis and of Post-Traumatic Stress Disorder, which the character played by Peck suffers from. I was actually surprised how in-depth this feature was and examines the disorder itself pretty thoroughly. I’ve always felt the film seemed a little silly and dated in its representation but the featurette and its participants really try to offer a defense. I’m not entirely sold but I admire the effort that went into the piece.

An odd addition though fairly charming is A Cinderella Story: Rhonda Fleming, which is a 10-minute interview with the actress who recalls, rather sweetly, how she got into film acting and her first real role in Spellbound, where she played the nymphomaniac patient Mary Carmichael (despite not knowing what a nymphomaniac was.) She then talks about her later work, like in Out of the Past and her charity work in her later years. I was actually surprised this was included but was pleased to have it. It’s a nice interview worth watching.

Making its way over from the Criterion DVD is the Lux Radio Adaptation of Spellbound from 1948, which was directed by Hitchcock and stars Joseph Cotten and (Alida) Valli in the Peck and Bergman roles respectively. Running an hour it’s a fun piece, and I actually think maybe Cotten would have been a better choice for the role than Peck. Disappointingly, like how MGM presented the Rebecca radio plays on that Blu-ray, we only get a black screen after the initial credits.

MGM then includes more material from an audio interview with Hitchcock by Peter Bogdanovich. This 15-minute segment is a great little piece, with Hitchcock talking to a great extent about the dream sequence and what he wanted to accomplish with it. They talk about various filmmaking styles and what the director’s opinions on “self-indulgent” directors. They also talk about some random topics including Hitchcock’s distaste for eggs, especially hard-boiled eggs. The audio quality drops midway through but other than that it’s a great piece.

The disc then closes with the same theatrical trailer that appeared on the now out-of-print Criterion DVD.

In the end I still think the Criterion DVD’s features beats the features found on here by a bit (Criterion’s felt more thorough plus they also had an audio interview with composer Miklos Rosza, a piece on the theremin, which only gets briefly mentioned in the audio commentary on this disc, and a lot of documents and memos about the film’s production) but these features still manage to offer some great, worthwhile material.

I’m still holding on to the Criterion DVD but this Blu-ray offers a nice upgrade in the picture department and does also contain some worthwhile supplements. At the price it’s a deal and is worth upgrading to or picking up for the first time.