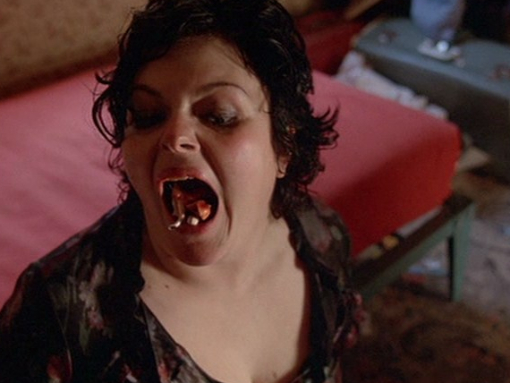 Though she went on to create a string of brilliant films, Jane Campion will always be remembered for her stunning debut feature, Sweetie, which focuses on the hazardous relationship between the buttoned-down, superstitious Kay and her rampaging, devil-may-care sister, Sweetie—and on their family’s profoundly rotten roots. A feast of colorful photography and captivating, idiosyncratic characters, the tough and tender Sweetie heralded the emergence of this gifted director, as well as a renaissance of Australian cinema, which would take the film world by storm in the nineties.

Sweetie, the film debut of director Jane Campion, appears on DVD in the aspect ratio of 1.85:1 on this dual-layer disc and has been enhanced for widescreen televisions.

Though I had recently seen the Blu-ray (which really looks amazing) the DVD still holds up very well. The image is consistently sharp and fine details still manage to pop off screen. Film grain remains but the standard definition presentation has some trouble with it and compression noise is somewhat noticeable but not overly distracting. Colours pop and are rendered nicely, and blacks are fairly deep and inky. Some minor halos are noticeable in places but they’re few and far between. The print has a few blemished scattered about but they rarely call attention to themselves.

The Blu-ray is better, far sharper, but the DVD still delivers a fine presentation, one of the sharper DVD transfers Criterion has delivered. 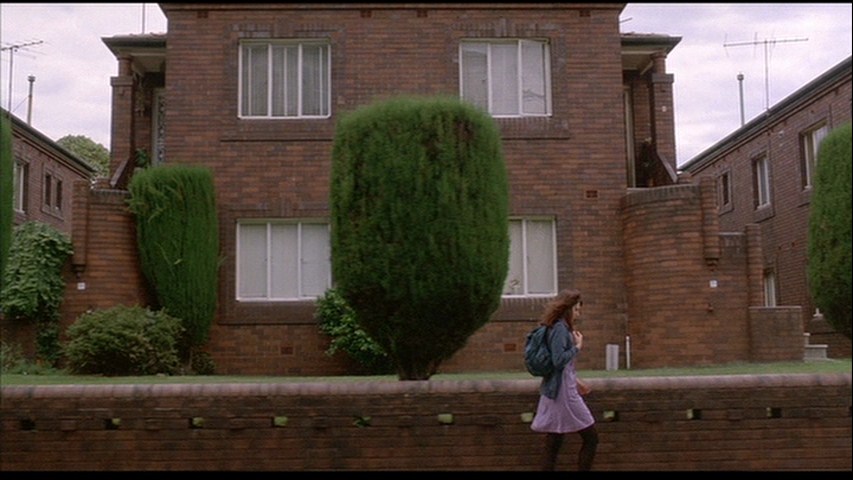 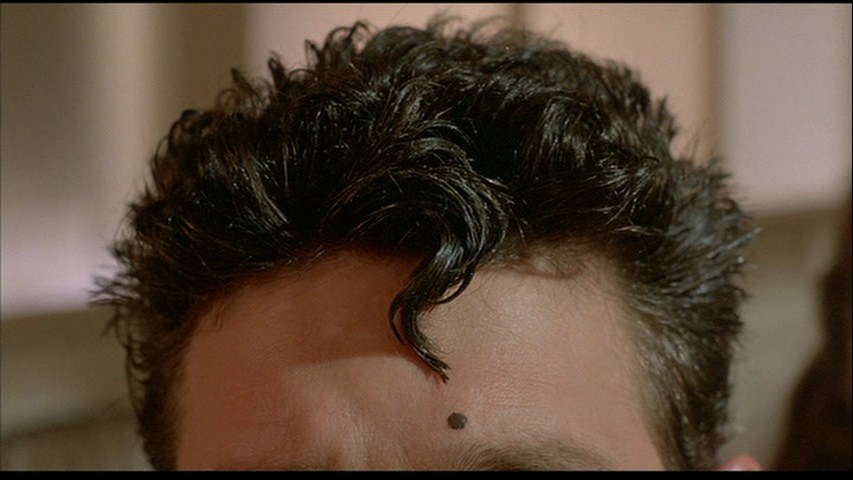 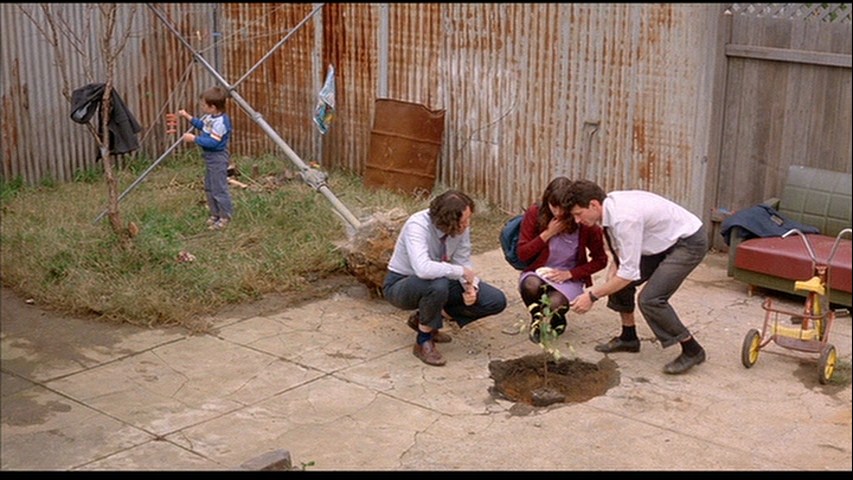 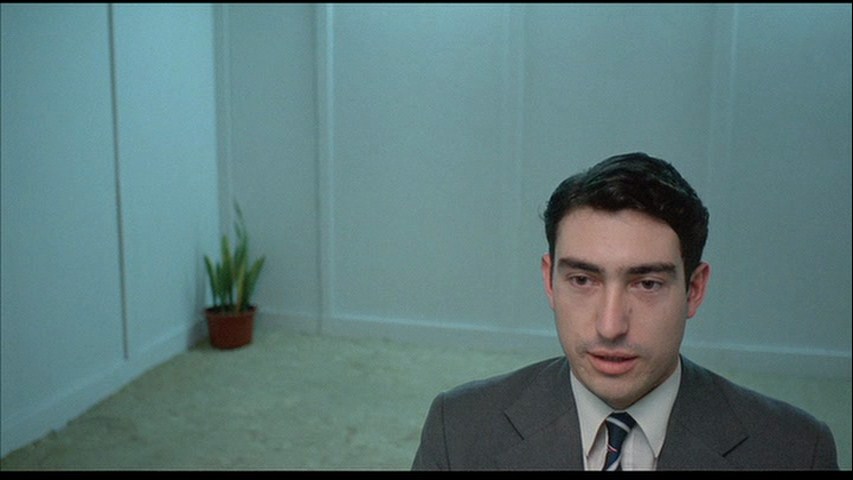 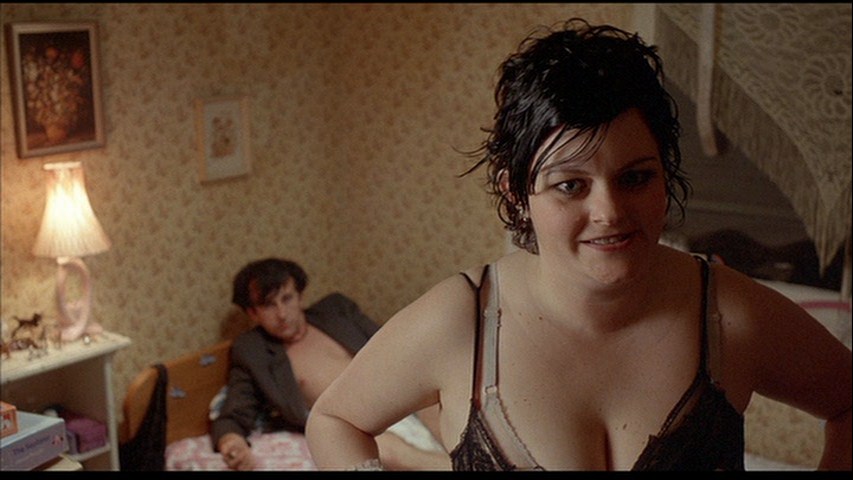 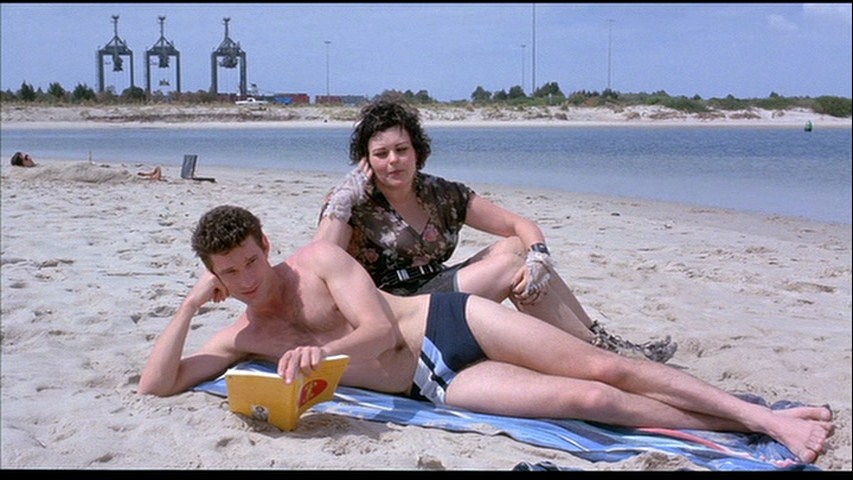 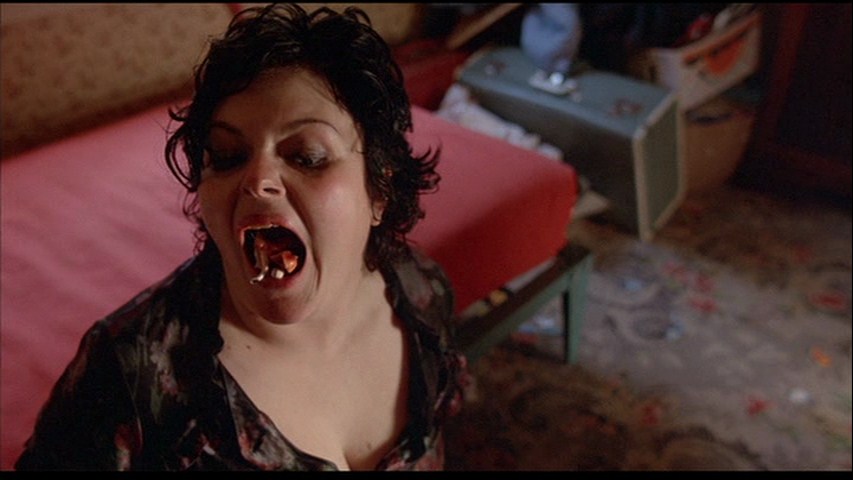 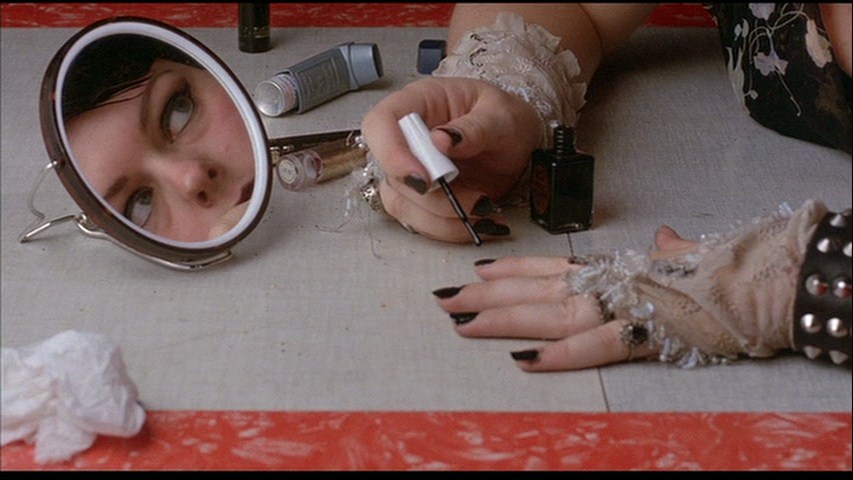 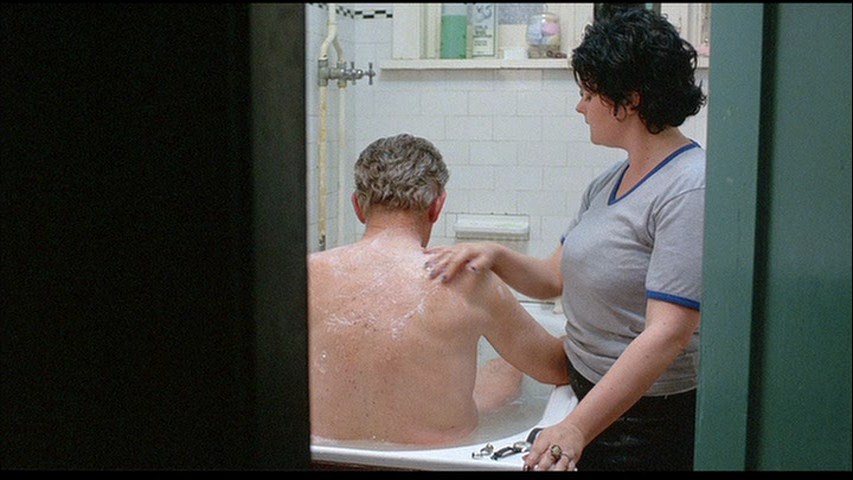 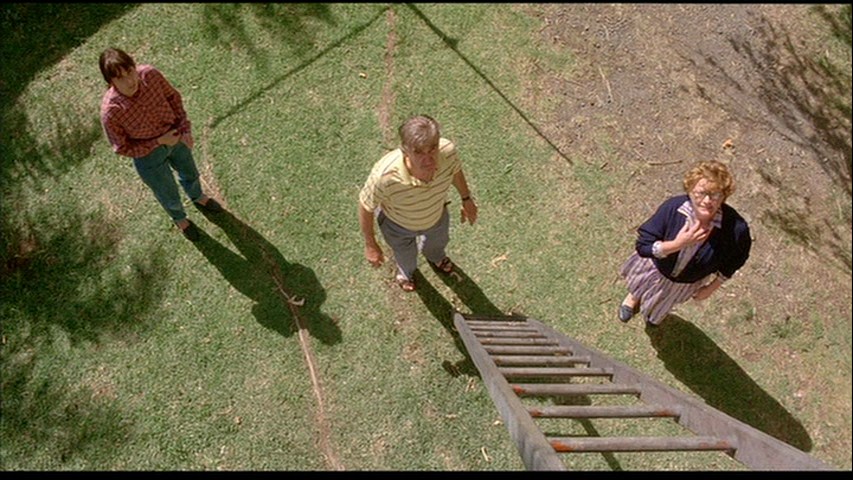 The Dolby Digital 5.1 surround track superbly handles the creative sound design of the film. There’s an ethereal quality to it, primarily in its presentation of the music, which moves smoothly and naturally between all 5 speakers effortlessly and naturally. Sound effects also appear naturally in the surrounds when called upon and sound clear and lively. Range is excellent, as are volume levels, and dialogue, when you get past the accents, is also clear and articulate. A surprisingly effective and active sound track.

Criterion puts together a rather impressive single-disc edition and give us a satisfying collection of supplements starting with an audio commentary by director Jane Campion, cinematographer Sally Bongers, and co-writer Gerard Lee. Campion and Bongers open the first 30-minutes or so of the track (why Lee is missing initially I’m unsure, the two women promising he’ll show up eventually) and spend a good portion of their alone time talking about the techniques used in the film including the editing and the framing, which can apparently be attributed partially to the fact Bongers is afraid to move the camera. Once Lee shows up the focus shifts primarily over to the writing of the film and the basis of the two protagonists, who are based on Lee and Campion, a couple at the time, to some extent (though Lee says that since the film is ultimately through Campion’s eyes, and the character of Louis, who is based on Lee, has been skewered a bit from how he wrote him, and probably represents how Campion saw Lee). They also examine the characters, the motivations, and things people have taken from the film (like a scene where some saw the possibility an incestuous relationship had taken place, though I do like Campion’s explanation for the scene.) Not too surprisingly the track is heavily technical and the participants are more concerned about the actual production, but it’s an incredibly engaging, surprisingly loose (occasionally funny) commentary that’s worth listening to if you’re fond of the film or Campion’s work in general.

Following this is Making Sweetie, a 23-minute conversation between actresses Genevieve Lemon and Karen Colston. The two carry on a fairly lively conversation about the making of the film, from when they first joined the cast to the release at Cannes (where the film was unsurprisingly met with “boos”). They talk in great detail about the specific blocking of sequences, and the limitations they faced because of Campion’s vision, and unsurprisingly they were shocked with how the final film turned out (they admit they didn’t really understand it while filming). They also talk a bit about the Australian film industry then and now and then the acceptance of the film in Australia and abroad (it was apparently far more popular outside of Australia.) It’s actually a very breezy and funny piece, and it offers an extension to the commentary track.

Criterion next includes a 3 short films by Campion, starting with the 9-minute An Exercise in Discipline: Peel, which follows a man, his son, and the boy’s aunt on a road trip of some sort, which explodes into a fairly ridiculous battle of wills after the boy discards of orange peels out the passenger window. It’s an interesting look at a dysfunctional family, with some intriguing camera shots and framing, creating an almost unnerving experience at times. The 12-minute Passionless Moments is probably my favourite of the three, a rather humourous, clever and quick look at ten people and the meaningless moments that most take for granted but seem to be important, maybe even defining to the people within the film. And then finally there is the 26-minute A Girl’s Own Story, which is more narratively driven than the other three, focusing around a group of school girls in the 60’s and their experiences which I won’t really spoil here. Decent though still manages to feel a little long, but again the photography and style are a sign of things to come from the director.

We then get an archival interview of sorts from 1989 (looking to have been made for an Australian film school) between Jane Campion and critic Peter Thompson, under the heading Jane Campion: The Film School Years. Here, for 19-minutes, Campion talks about her love of making films (which doesn’t feel like work) and talks about her short features. Brief, with some nice analysis, but Campion comes off very passionate and makes the interview a much more engaging affair than it probably should be.

Next is a production gallery featuring about 40-50 photos from the production and the disc features then close with the film’s 2-minute theatrical trailer. The booklet has an essay by Dana Polan on the film and Campion’s work in general.

I would have expected deleted scenes but we still get a very engaging set of supplements for the film, all of which offer a unique look into the making of the film, and Campion’s development of her technique through her shorts which would lead up to Sweetie.

This release was one of the more pleasant surprises I’ve ever had from Criterion. Its presentation goes above and beyond and the supplements are all deeply engaging. A stellar release that comes with a high recommendation. 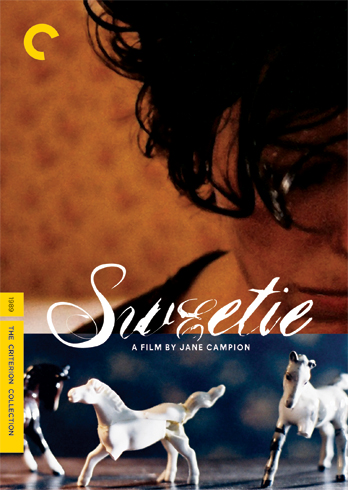 An Angel at My Table (DVD)