Discuss DVDs and Blu-rays released by Eureka/Masters of Cinema and the films on them. If it's got a spine number, it's in here.
Forum rules
Please do not clutter up the threads for MoC titles with information on pre-orders. You can announce the availability of pre-orders in the MoC: Cheapest Prices / Best Places to Buy / Pre-Orders thread. Any posts on pre-orders in any other thread will be deleted.
Post Reply
40 posts
Message
Author

I find Lugosi more fun for sure. Lee and Karloff both have films where they are clearly bored, but Lugosi always goes in full throttle.
Top

I'm rather surprised the Cats on Film featurette isn't by Anne Billson.
Top

Easter egg for Murders in the Rue Morgue.
Top

Wow, thanks! That is a significant extra. When reading the booklet I thought it would be a good idea to include the alternative edit. It's a shame they've "hidden" it though.
Top

Rayon Vert wrote: ↑
Sun Nov 11, 2018 11:24 pm
Did Renoir get his inspiration for the girl on the swing shot in A Day in the Country from a similar sequence in this film?

I revisited Murders in the Rue Morgue for the first time in a while this morning and had the exact same thought during the scene!

I didn’t have time to fully consume all the dissection on this film from way back in this forum’s history but I appreciate how folks mention that the simplicity in moral action is illusory to the greater theme of scientific progress vs. comfortable ideological stagnation (as some have declared to be religion). If viewed in that context, the evil’s intentions vs actions are split to such extremes that the dissonance between humanism and unsentimental advancement don’t leave room for the other. It’s a dangerous tightrope to walk, but that doesn’t undercut the importance of forward movement. The key ingredient of empathy may come from those who want things to stay as they are, a dangerous stance itself, but there’s also a dual reading that they aren’t driven by empathy but by fear of change or any practice (which could extend to cultural or anything non-dominant) that threatens their sensitive security. That reading could also (perhaps a stretch) insinuate the mad scientist as more empathetic since his experiments are rooted in sacrifice of humanity for good of his animal companion, adopting the same “me and mine” attitude that many of these ‘normal’ ideology-bound citizens with the pitchforks embody in stated philosophy. But of course the concept that animal lives are more important to someone than human ones is unfathomable! Obviously the actions taken in this film differentiate who the good guys and bad guy in clear terms, but that series of unconscious intentions toward honest values is interesting to unpack, and may paint the good guys as more selfish than the bad. Action matters more than intention here, but it’s still a worthwhile second layer to contrast with thematically.
Top

Rayon Vert wrote: ↑
Sun Nov 11, 2018 11:24 pm
Did Renoir get his inspiration for the girl on the swing shot in A Day in the Country from a similar sequence in this film?

I revisited Murders in the Rue Morgue for the first time in a while this morning and had the exact same thought during the scene!

William Wellman used a similar shot in Wings. I always assumed it might have been more influential since it was a big hit and eventual Best Picture winner. But it can always been dangerous to label “firsts”
Top

I believe there's also a similar swing shot of Jeanette MacDonald in the film Maytime. Also, this might have been a source of inspiration for Renoir: 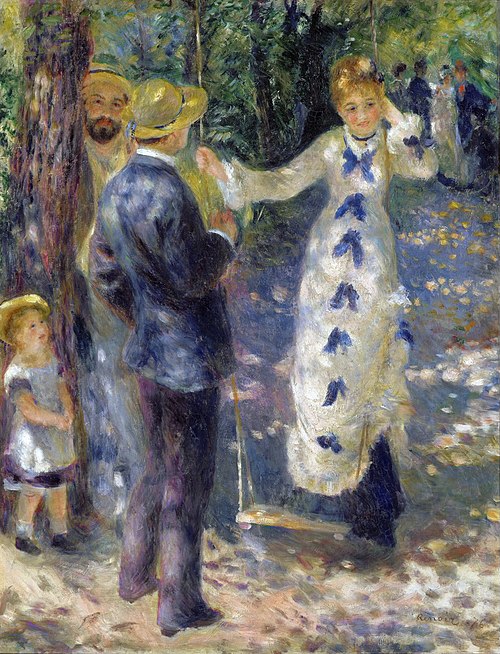 I liked The Raven more than I expected to, not just for the inspired Poe traps, but the way the menace was executed in various small setpieces really worked. The early scene when Lugosi traps Karloff in the room post-surgery may be my favorite part, as he looks and laughs at him through the holes as Karloff shoots the mirrors. It's so aesthetically sinister and plays well as a demonstration of my greatest fear in being secluded and robbed of agency with any kind of permanence (here the disfigurement that triggers Karloff's core beliefs, that he hilariously psychoanalyzes to be the sole cause of his life of crime!) At an hour, it's fun without overstaying its welcome.

The Black Cat I've seen before, but it's a film where the pleasures are almost solely in the aesthetic progression that swallows the characters into dark spaces of evil. The beautiful classical music amplifying during moments of the good characters losing as Karloff bests them, practically romanticizes this pain in a masochistic fashion. I appreciate how the narrative continuously emasculates Lugosi's ability to fight evil with his skills, losing at chess, failing to protect the innocent couple, and blind to the depth of history of Karloff's impact on his life. He comes to confront without wit or plans, and so while on the one hand his willingness to directly contest the facilitator of his trauma is commendable, his ineptitude next to Karloff's power feeds the satanic nihilism for much longer than is comfortable. The film makes Karloff's practices so vile that as audiences we would never side with him, but almost everything else in the film seems to acknowledge his superiority in every way except morally. What a method to create an ultimate unsettling worldview.. we must literally disconnect and rely on our own experiences from our world to combat this wormhole of amorality in order to strike a balance to cope. And of course Lugosi has to succumb to emulate Karloff's sick behaviors to achieve any sense of power in the end.
Top

Speaking of inspiration from this film, did Welles get the idea for the mirror scene in Lady From Shanghai from The Raven?

There was a lot to like in all three of these films, but I enjoyed Murders the best. TWBB is right, there's a lot to enjoy in The Black Cat and as I've mentioned elsewhere the architecture and the design of the house is dazzling, but some of the story was a bit thin. I really enjoyed The Raven with Karloff in particular looking gruesome, but the start of the film was also a bit thin on plot and I found Lugoi's descent into evil a bit surprising and unexpected. Murder on the other hand had a thin plot, but like Karloff's makeup in Raven, and the architecture in Black Cat, the thing I liked most about this was the sexuality on display in the first reel, with some really cool, pre-Code esque hints of sexual deviancy in some of the imagery.

I keep remarking on the thin plot. One thing I felt while watching all of these films is that I really felt like they each needed 10 extra minutes. As fun as it is to breeze through some hour-long horror films, I found some additional backstory or details showing how the antagonists became so evil would have been helpful. Fun films to watch around Halloween, for sure, but not much better than that. Going to make my way through the Arrow Vincent Price set next for comparison.
Top

The booklet in this is pretty bad - the essay by Alexandra Heller-Nicholas hasn't been proofread at all, worst sample: "...itself a notable deviation from what was typically then in horror much vaguer real world references in horror Hollywood horror".
Top