Horror icons Christopher Lee and Peter Cushing team up once again for an Amicus take on Robert Louis Stevenson’s classic novella Strange Case of Dr. Jekyll and Mr. Hyde, with Lee occupying the role of the scientist and his deadly alter ego. Directed by Stephen Weeks, making his first feature aged twenty-two, I, Monster presents an inventive take on an iconic tale.

Not that you can tell from the marketing, but this is a Jekyll and Hyde adaptation, indeed the most faithful one I’ve seen given it uses the Utterson frame. It’s rather good.
Top

Not wanting to repeat myself from the general upcoming Indicator thread, I'd agree. The central performance from Lee is great, but it is compromised by a messy production which started with a couple of weeks of constant pans / tracking shots to produce a 3D image (Milton Subotsky had read a letter in New Scientist which outlined the procedure). The location filming is nice and an interesting contrast to Hammer's studio based style. Mike Raven - well, he looks the part and REALLY wanted to be the next big horror star...
Top

It also has TWO Doctor Whos in it...well, sort of!

Funnily enough, I though the same - indeed, they're both alternates (for differing reasons) of William Hartnell.

Also - and even more obscurely - there's a (sort of) companion there as well...
Top

Yes, in Paul Magrs's audio adventures. They're fun, but not a patch on his novels. Back to the film, this does get covered in The Many Faces of Christopher Lee which has been included as an extra in at least one Hammer film. Also, I'm sure I remember a piece in Sight and Sound from the early seventies by David Pirie about the new wave of British Horror directors including Stephen Weeks, but I couldn't find it before when I had a look.
Top

Bumped to flag up that it's been formally announced.
Top

I have to admit, I wasn't aware of a longer version of this - which has made it even more enticing. Do the extras touch on the abortive 3D filming at all? I managed to track down the letter in New Scientist (IIRC) which led Subotsky to believe it was a viable scheme, which makes you wonder just what Subotsky's interests covered (I gather he read A LOT, especially paperback fiction - almost all of Amicus's films are taken from books or plays) that not only was he reading it but that he understood it enough (well - maybe not enough) to extrapolate the film making implications. I don't have a copy, but IIRC it was a fairly short letter and pretty technical.
Top

I suspect the longer version is the one you already know. As Amicus's earlier Torture Garden, for some reason the original theatrical version was several minutes shorter, and then they lengthened it for TV/video. There's no reason not to include both versions as it takes up literally no extra disc space.

Stephen Weeks certainly mentions the abortive 3D filming, but in the context of hating being forced to do it and being delighted when Subotsky realised that it basically wasn't working two weeks into shooting.
Top 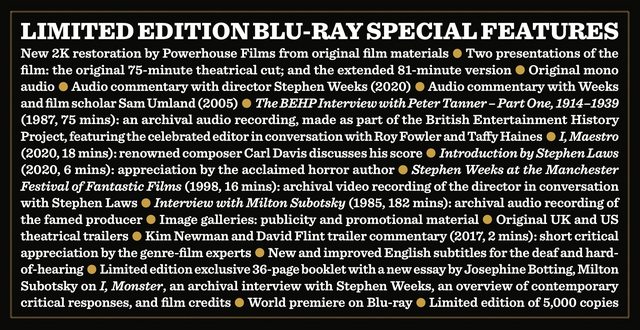 Since this is from a brand new 2K restoration by PH Films, I expected a better PQ than this, but it became quickly clear during my viewing that it was likely to boil down to the elements used. It's indeed the case : the restoration is from a CRI (4K scan / 2K resto) with the 2 extended bits from a pre-existing HD master. As with many of my experiences with movies restored from CRI, it's rather soft, grain feels a tad extinct, but colors most specifically are all over the place. The movie regularly has a dreaded greenish aspect while skins are very pink (those people look very healthy considering the period and the subject !), but more because of a possible fading than an aesthetic choice.

Eve is much more consistent and impressive overall. It's also an interesting case because the scan is brand new but the restoration was performed photochemically in 2008, which isn't a combination I've encountered before. The shorter cuts however are much rougher.
Top

God, Mike Raven should not be given long monologues unless he's dubbed by Valentine Dyall (Which he was in LUST FOR A VAMPIRE)
Top

I hope so. It's had at least two blu releases in the US but none in the UK so far. For my money, it's Amicus' best non anthology film - and it's a toss up with From Beyond The Grave for best film anyway.
Top