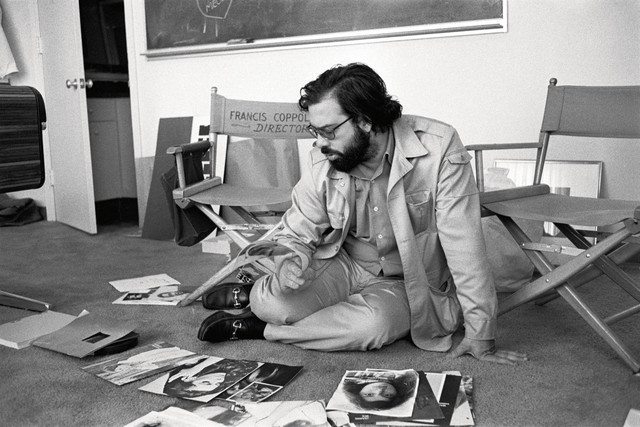 "Movies are an illusion, and the emotion that the audience gets out of the movie doesn’t really come from the movie; it comes out of themselves."

GoodOldNeon wrote: ↑
Tue Dec 08, 2020 5:09 pm
I couldn't find a dedicated Coppola thread, so I will post this here. Coppola is currently visiting the Finnish National Audiovisual Institute, and as part of his visit the Institute is holding a livestreamed discussion with Coppola on Saturday 12 December at 19:00 Finnish time. The stream will be hosted on Facebook and Vimeo, and there will be an opportunity to ask questions during the event. More info here.

What does it say about Coppola's place in auteur-dom that there wasn't even a dedicated thread for him until a month ago? Director/Screenwriter of two of the most acclaimed and lasting artistic achievements in Hollywood history--three if you count the first two Godfathers as separate films. Personally, I would place The Conversation well ahead of Apocalypse Now, but it doesn't hold the same place in the public consciousness as Apocalypse.

So, what is it then? Is the rest of his body of work that uninspired? Kind of, in my opinion. Out of all of his other films, the only ones that I come back to are Rumble Fish and The Outsiders, and The Outsiders really isn't all that great (especially with the revised soundtrack that Coppola added for the Director's Cut). I'm partial to those films because I loved the books as a kid.

One From The Heart has its fans--I'm not one of them. Dracula is striking in parts, and terrible in others. The rest of his body of work is barely worth mentioning. To be fair, I haven't seen his two most recent films.

Coppola's forgotten status isn't unique to this forum. He rarely gets mentioned with the great Directors of our time. It has been a slow fade from relevance.
Last edited by tolbs1010 on Tue Jan 12, 2021 12:15 am, edited 2 times in total.
Top

I disagree with the idea that he's fading from relevance, especially now that every year sees the "rediscovery" of one of his post-Apocalypse Now movies on Blu-Ray. The amount of press that the Cotton Club and Godfather III recuts got would certainly not suggest that that later work is forgotten about, quite the contrary in fact. And on the subject side of things, I firmly disagree with your characterization of that work as "uninspired". I admittedly haven't seen the likes of Gardens of Stone (which even Coppola admits he wasn't present for, albeit for tragic reasons) or The Rainmaker, but I'm one of those One From the Heart fans you mention, I hold Rumble Fish in close to equal stature with his 70s classics, and I certainly don't think a film as beautiful (both visually and thematically) as Tucker: The Man and His Dream deserves to be called "barely worth mentioning".
Top

I’d say Youth Without Youth and Twixt are both bold and bizarre whatsits that show Coppola is not content to keep making the same film. The latter’s intended release platform, with live musical accompaniment and real-time editing, also shows a playful engagement in what cinema even means anymore
Top

My impression is that many of Coppola's post-Apocaypse Now films are beloved. "The Narrator" has a good point that both The Cotton Club Encore and The Godfather Coda enjoyed a very warm reception and received a great deal of press. Peggy Sue Got Married was on TCM not too long ago and I saw a number of favorable posts on social media about it (particularly the mirror shot at the beginning of the film). Rumble Fish has a great deal of fans, and The Outsiders has nostalgia value for many (though most people do seem to prefer the theatrical cut to Coppola's The Outsiders: The Complete Novel recut). One From the Heart has a dedicated fanbase.

Of the later films, I thought Tetro was really wonderful. My own favorite film of Coppola's is probably The Rain People, followed closely by The Conversation.
Last edited by Dylan on Mon Jan 11, 2021 10:04 pm, edited 1 time in total.
Top

Back home, the Tribune and the Sun-Times consistently gave his work good reviews from the mid or late '80s through the '90s, at least by Siskel, Ebert and Michael Wilmington. I don't believe they actually put them on the same level as his '70s successes, but The Cotton Club (in its inferior theatrical cut), Peggy Sue Got Married, Tucker, Dracula and The Rainmaker were all considered good films. Wilmington even praised Jack (which I saw....ugh - Siskel joked that Coppola must have done it to finance some new business move with his vineyard).

They're not great movies, but many of them are commendable if uneven, and they all have something highly memorable about them. I don't expect masterpieces out of him anymore, but at least he has it in him to do more commendable work that's worth seeing (if not revisiting very often).
Top

The first film of his I ever saw theatrically was The Rainmaker, and I still have a softness for it. Danny DeVito is incredibly endearing in it, and
while its David-vs.-Goliath story is a bit hackneyed, it is well-constructed.

I was browsing the contents of John Huston's papers at the AMPAS, and was surprised to see a script for Reflections in a Golden Eye by Coppola dated 1963. IMDB and other sources suggest that he did rewriting, but it seems like he wrote a completely rejected draft while he was still attending graduate school at UCLA.

One other interesting tidbit about him-The autobiography of Don Coscarelli mentions how as a teen, he did some work on a literary magazine that Coppola funded and his brother August (Nicolas Cage's father, and a long-tenured professor and Dean in the California State University system) oversaw. The project never came to fruition, but the idea of creating a journal for new writing was fulfilled by the 90's with Zoetrope: All-Story, which still exists and continues to thrive.
Top

beamish14 wrote: ↑
Tue Jan 12, 2021 12:18 pm
The first film of his I ever saw theatrically was The Rainmaker, and I still have a softness for it. Danny DeVito is incredibly endearing in it, and
while its David-vs.-Goliath story is a bit hackneyed, it is well-constructed.

It's very well-directed. I'm not sure if it would be an exciting program, but if I booked a film program on "impersonal" work-for-hire gigs by great auteurs, this would be one of them. It's interesting when the stakes are low and the director isn't so broken that they phone it in (or rather, when they're still committed to doing the best job they can). One of my favorite little bits is the bookshelves - it's been a while since I've seen it, but I remember a hilarious contrast between Rourke's dinky little shelf of a few select law books and the enormous library owned by the other side.
Top

IIRC, he was finally getting around to financing Megalopolis before the pandemic hit. I hope he's able to do it still.
Top

I finally watched Heart of Darkness, the Apocalypse Now doc, after putting it off for years, and the final lines are very telling for how Coppola's approach to filmmaking changed and became more experimental over time. His views on film as an art form best served without the "professionalism" as he calls it are reflected in much of his post-AP projects, but none as much as the esoteric final trio, with Twixt (one of his very best) being perhaps the least studio/avg. viewer-friendly creation of the lot, making what he wants on a shoestring budget without a care for imposed expectations. In a sense, he himself chooses to become the "little fat girl in Ohio who will become the next Mozart" that he refers to optimistically in his blunt-opinion-coda, because why not?
Top

For the record -- a 4K resto of "The Rain People" (shown at the 2019 Lumiere festival in France):
https://bampfa.org/event/rain-people
Top

FINALLY! I actually joined this site just for Coppola discussion. During the quarantine period last spring, he slowly became my favorite filmmaker. What an artist! I think of him just like I think of Neil Young. I think the only one who had a better '70s output than Neil is Francis.

His post 1970s films that really seem essential and representative of his talents: