Discuss DVDs and Blu-rays released from Arrow and the films on them.
Forum rules
Post Reply
11 posts • Page 1 of 1
Message
Author 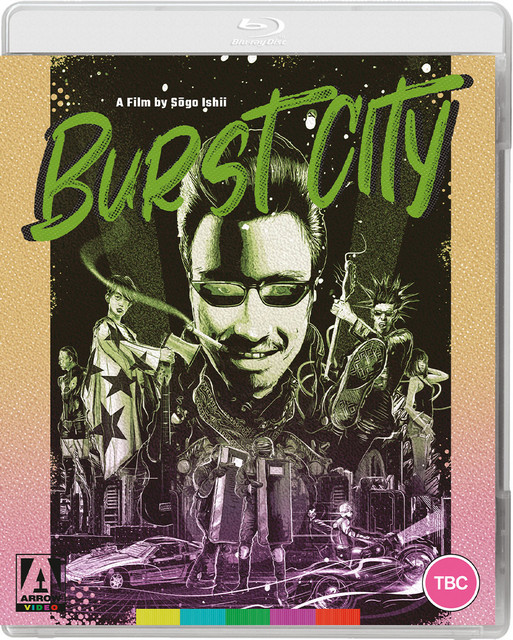 Burst City is an explosive Molotov cocktail of dystopian sci-fi, Mad Max-style biker wars against yakuza gangsters and the police, and riotous performances from members of the real-life Japanese punk bands The Stalin, The Roosters, The Rockers and INU.

In a derelict industrial wasteland somewhere on the outskirts of Tokyo, two rival punk bands and their unruly mobs of fans gather for a Battle of the Bands-style protest against the construction of a nuclear powerplant, bringing them head to head with the yakuza industrialists behind the development of their turf.

This extraordinary celebration of Japan’s punk music scene of the early 1980s thrust Sōgo Ishii (now known by the name of Gakuryū Ishii), the underground filmmaking wunderkind behind such works as Half Human: Einstürzende Neubauten (1986), Angel Dust (1994) and Electric Dragon 80,000V (2001), to the next level and is regularly cited as an early landmark in Japanese cyberpunk cinema.

There's already an excellent Japanese blu ray of this (albeit without English subtitles), so this will probably look good. The extras look cool. But I really hate that cover. Hopefully there's a cool reversible cover underneath.
Top

This is Ishii's Region A Blu-ray debut. Hoping for more to come.
Top

There was an incredible Japanese box set with a ton of Ishii's films, incluiding his short Shuffle, which is amazing and the
first adaptation of a work by Otomo Katsuhiro (Akira, Steamboy, Neo-Tokyo).


Isn't he the first director to have an 8mm feature get a theatrical release in Japan?
Top

I know there're rights difficulties in releasing his films along with many others outside of Japan, but I'd really love to see August in the Water & Labyrinth of Dreams again someday. Still, very happy that this is coming out.
Top

It would be great to get Angel Dust on blu someday as well.
Top

According to the Arrow site, the reversible cover appears to be the original Japanese poster, which looks great.

Really excited for this release, have the R1 DVD, which is fine, from what I remember. The extras sound great as the Japanese punk scene of that era (in particular The Stalin, who appear here) is really interesting.
Top

This looks wild but it might also make me physically sick with those camera movements.
Top

Finch wrote: ↑
Sat Aug 29, 2020 8:49 pm
This looks wild but it might also make me physically sick with those camera movements.

That's definitely the quality that all of the Japanese cyberpunk films of the era share along with the lo-fi industrial aesthetic. Wild camerawork and lots of aggressive soundscapes are de rigueur!

Adam X wrote: ↑
Fri Aug 28, 2020 4:42 pm
I know there're rights difficulties in releasing his films along with many others outside of Japan, but I'd really love to see August in the Water & Labyrinth of Dreams again someday. Still, very happy that this is coming out.

Me too, though I wouldn't hold out much hope for Arrow issuing August in the Water, as they don't even get the name of the film correct in the included filmography!

I love Ishii's 90s work, and was delighted to get a chance to finally see Burst City, but it's kind of a mess, more valuable as a record of a scene than something along the lines of his more elegantly off-kilter later work. The film is full of energy, but it's firing off in every direction at once. In the accompanying interview with Yoshiharu Tezuka, he explains that they'd intended to make a more commercial movie, but blew through their budget before they'd shot everything, so Ishii filled the gaps with experimental footage. This accounts for the general incoherence, but I'm probably not alone in thinking those filler sequences are the most interesting part of the film!
Top
Post Reply
11 posts • Page 1 of 1