Discuss DVDs and Blu-rays released by Criterion and the films on them. If it's got a spine number, it's in here. Threads may contain spoilers.
Post Reply
18 posts • Page 1 of 1
Message
Author 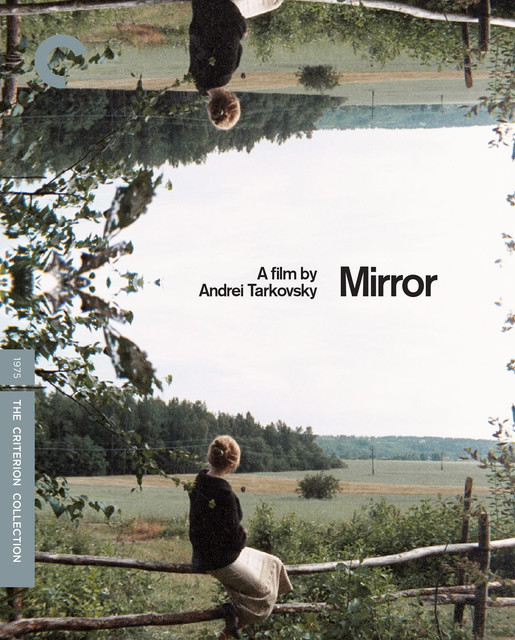 A subtly ravishing passage through the halls of time and memory, this sublime reflection on twentieth-century Russian history by Andrei Tarkovsky (Stalker) is as much a poem composed in images, or a hypnagogic hallucination, as it is a work of cinema. In a richly textured collage of varying film stocks and newsreel footage, the recollections of a dying poet flash before our eyes, his dreams mingling with scenes of childhood, wartime, and marriage, all imbued with the mystical power of a trance. Largely dismissed by Soviet critics on its release because of its elusive narrative structure, Mirror has since taken its place as one of the director’s most renowned and influential works, a stunning personal statement from an artist transmitting his innermost thoughts and feelings directly from psyche to screen.

I've not had the privilege of seeing this before so I'm pretty excited for this stacked release. Three documentaries!
Top

Has the Tarkovsky/Misharin script treatment been published in English before?
Top

The Faber & Faber edition of Tarkovsky's Collected Screenplays has two drafts, both by Tarkovsky/Misharin and both dated 1968, "Confession" (a short treatment) and "A White, White Day" (a longer script).
Top

What strikes me about the restoration and this release is the shot featured on the cover art, one of (if not the) most iconic shots from the film. As you may remember, although the design is the same the original Janus poster from when the restoration was announced featured significantly more vibrant colors, most notably the pink/blue sky. This is how the shot always looked, or at least in any home video release (DVDBeaver). However, when I watched the restoration via virtual screening and this scene came, it immediately struck me how different it looked from what I was used to. In the restoration the scene resembles the updated cover for the Criterion release, where the sky looks overexposed rather than pink/blue. Other than the change being reflected in the update to the poster, you can also see the difference comparing screenshots from the same scene in the restoration trailer and in an older YouTube clip (not the best sources, I know).

Does anybody more knowledgeable than me have any insight as to why the scene looks so drastically different than what we're used to?
Top

I have the blu-ray "Lumiere" which I think is the same restoration that Criterion will use for its blu-ray (without changing the color grading) - I assume that Criterion (according to the trailer Criterion posted - the restoration one- and the Criterion.com web site page of "Mirror") that they will use the same transfer than the "Lumiere" restoration and that the color grading (according to everything I saw posted at Criterion web site) will be the same than the "Lumiere" restoration/blu-ray.
It looks like a significant upgrade in comparison to the Artificial Eye blu-ray which looks like a DVD upscale to HD.
Now, if I'm pleased with the HD details and the color grading (the fire scene, the indoor apartment scene, the "black & white" scene of the printing (my favorite scene ever- there is a slight tint of sepia (not at all like Stalker but not "pure" black & white like the previous screenshots at DVDBeaver) I have to say that the sky is even not blue in the introducing sequence : it's almost white. No pink'ish/blu'ish tint anymore. This is one of my favorite scene of the movie, and while the HD details are great (clothes, the grass and the haunting wind (which announces ? Stalker) the almost white sky is disturbing. We kind of lost the strange atmosphere of this unforgettable opening scene.

Well I don't know - the most accurate base for me is : http://nostalghia.com
but this blu-ray has not been reviewed so far (the "Lumiere").

So the white cover "matches" the new "almost" white only sky.
The Janus poster has a pink'ish look but the restoration trailer with the Janus logo posted at the same time than the Janus poster was already a transfer which seem to me like the "Lumiere" blu-ray restauration. I remember having watched it carefully because I thought that Criterion had a different transfert/restoration. And there was a short clip of the opening scene and the sky was almost white only like the "Lumiere" transfert.
I highly doubt that Criterion would re-grading the color of this opening scene.

It's odd because the transfer as a film-like look (argentic-texture) which is very pleasing, and the color grading does not seem to be disturbing for me (I had a lot of DVDs of the Mirror before this one, and the Artificial Eye Blu-Ray) : the color are warm, the black & white scene looks good, the snow scene looks good, the interior scene looks good- I can not see some color which could have been "boosted"- it looks "balanced". And each scene is different, like a puzzle, and I think that it looked rather good through all the movie (the footage sequence for instance); except the for the sky.

Apparently Tarkovsky seem "uncatchable" and resistant to being "catched" on numeric/digital format. I'm not totally sure if this is because of acceding to the negative of Tarkovski movies or if there is something in Tarkovski movies (Stalker, Solaris, The Mirror) which seem to be elusive and resistant - Mind you, Criterion blu-ray are okay (Stalker, Solaris) but we barely reaches an organic texture of film. Well, I don't know, there is something mysterious with Tarkovsky movies.

this is a huge step with the Mirror, but perhaps not the definitive edition.

I would be curious to read a review of the Lumiere blu-ray at nostalghia.com
there are probably some texts, writings by Tarkovsky and the director of photography about the look of the sky; it's certainly documented.
Top

The inclusion of A Cinema Prayer is great. I think the documentary really succeeds in giving a few perspectives on Tarkovsky’s body of work without trying to solve the mysteries within. It rather articulates the ambivalences and shows the beauty in art that cannot and maybe also should not be completely understood. Therefore the documentary can be interesting for people who don’t get much out of Tarkovsky as well.

Considering that this release consists of two BluRays and also the films script it does seem to be a likely contender for a DigiPack, doesn’t it?
Top

nostaljhia wrote: ↑
Fri Apr 16, 2021 11:11 am
Does anybody more knowledgeable than me have any insight as to why the scene looks so drastically different than what we're used to?

The severe level of pink was only introduced in the last round of home video releases. The original DVD releases had far more natural colours, although some certainly did have hints of pink.

Rupert Pupkin wrote: ↑
Fri Apr 16, 2021 11:37 pm
I would be curious to read a review of the Lumiere blu-ray at nostalghia.com
there are probably some texts, writings by Tarkovsky and the director of photography about the look of the sky; it's certainly documented.

Trondsen actually posts here, and commented in the Rumors thread when someone questioned the original pink sky poster:

Trond Trondsen wrote: ↑
Sat Jan 30, 2021 4:18 pm
Andrei Tarkovsky Jr. is involved [with the new Criterion release], contact has been made with the original color grader (who's still alive), the original 'color passport' still exists, what I have seen so far looks absolutely stunning. There will be some killer bonus materials, too. I think the pink in the poster will be toned down. Everybody agrees it's a bit over the top and not what AT intended.

Such a wonderful film although as an outsider approaching it, and a neophyte to much Soviet history, it also feels like one of the most inexplicable pieces of cinema as well, as if only the maker and a few close relatives could ever possibly understand all of the resonances going on within it. Maybe that is what lends it a curiously cold and slightly detached quality to its environments (which would go even further in Stalker), as if viewed through a haze of memory of when such places and people once had meaning. Because it is all a reminiscence anything goes however paradoxical just because it feels correct, from levitation to conflagration, and is presented with the same matter of fact sense of everyday magic. A fence collapses; a tank rusts; a family home burns in a rainstorm. Generational layers of lived experience, as the past and present occupy the same space. With maybe that interplay between revered, yet malleable and decaying memory being a good metaphor for the Soviet Union itself (or really for any state that is big and self-contained enough to begin dreaming about itself).

This feels like the core of Tarkovsky, with his other films featuring elements abstracted and framed into more straightforward 'narrative features': the giving up of the home in The Sacrifice; the travails of a young boy in Ivan's Childhood; the magical realism of Stalker. But I'm always most struck by the sense that maybe this is kind of a continuation of Solaris, with the main character here existing within his own conjured up, self contained, island of memory similar to where we leave Kris Kelvin in the final moments of Tarkovsky's previous film. Only in this film we never get a pull back wide shot to show the surrounding ocean.

It feels strangely influential in its imagery (Lars von Trier's The Element of Crime and Tsai Ming-Liang's films come to mind), yet impossible to be entirely remade. And this is a good opportunity to link to that video that combines Mirror with Kraftwerk!
Top

I'm not a fan of documentaries in general and film/art docs in particular. Not an efficient way to convey information, it seems to me. Docs about artists and their works tend to be impressionistic and free-associative. This film might've benefited from a treatment like the one Criterion gave The Color of Pomegranates, where Tony Rayns in the commentary and Steffen in a video essay broke down the film, matter-of-factly. But of course, one could just go read a book...
Top

I'm just stating a preference. There's only so much space for extras, and producing them (or acquiring them) usually isn't for free.
Top

Excited for this release, but man that's a goofy cover – the kind of thing I honestly would have expected to see in the old fake Criterion covers thread.
Top

When a film - like this one - is littered with one extraordinarily beautiful and weighted image after another, you can always expect them to choose the dullest, most predictably MOR from a designer who either hasn't actually watched the movie or did and simply did not connect to it in any way at all.
Last edited by wishhersafeathome on Fri Apr 23, 2021 1:59 am, edited 1 time in total.
Top

The same with Stalker. Beautiful imagery but yet the cover chosen you'd never know it.
Top

I quite liked the covers for Solaris and Ivan's Childhood, but agreed on Stalker – pretty bland/obscure design. For me the best one remains the original Artificial Eye release, with that evocative image of Kaydanovskiy and the dog.

(Incidentally, I remember back in the mid 2000s having to decide between importing that and the Kino DVD; anyone remember that hilariously bad cover?)
Top

It's strange to think that I've been waiting twenty years for this release.

I still have the Kino on my shelf and can verify that it should be forgotten. Alas, I can't forget it, because I watched the film a dozen times when I first "discovered" it. My mind's impression of this film is set by Kino. Perhaps this will scrub it clean.
Top
Post Reply
18 posts • Page 1 of 1