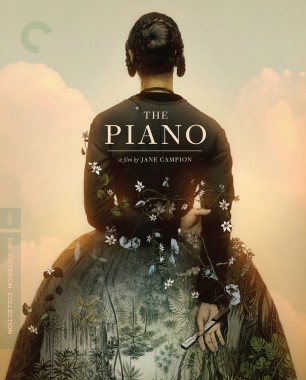 With this sublimely stirring fable of desire and creativity, Jane Campion became the first woman to win a Palme d'Or at Cannes. Holly Hunter is achingly eloquent through silence in her Academy Award–winning performance as Ada, an electively mute Scottish woman who expresses her innermost feelings through her beloved piano. When an arranged marriage brings Ada and her spirited daughter (Anna Paquin, in her Oscar-winning debut) to the wilderness of nineteenth-century New Zealand, she finds herself locked in a battle of wills with both her ineffectual husband (Sam Neill) and a rugged frontiersman (Harvey Keitel) to whom she develops a forbidden attraction. With its sensuously moody cinematography, dramatic coastal landscapes, and sweeping score, this uniquely timeless evocation of a woman's inner awakening is an intoxicating sensory experience that burns with the twin fires of music and erotic passion.

• New, restored 4K digital transfer, supervised by director of photography Stuart Dryburgh and approved by director Jane Campion, with 5.1 surround DTS-HD Master Audio soundtrack
• In the 4K UHD edition: One 4K UHD disc of the film presented in Dolby Vision HDR and one Blu-ray with the film and special features
• New conversation between Campion and film critic Amy Taubin
• New interviews with Dryburgh and production designer Andrew McAlpine
• Interview with actor Holly Hunter on working with Campion
• "The Piano" at 25, a program featuring a conversation between Campion and producer Jan Chapman
• Excerpts from an interview with costume designer Janet Patterson
• Water Diary, a 2006 short film by Campion
• Trailer
• New English subtitle translation and English subtitles for the deaf and hard of hearing
• PLUS: An essay by critic Carmen Gray
Top

Happy to see that it includes Water Diary

The lack of Michael Nyman in the extras is disappointing. A bit surprised that neither Paquin nor Keitel are there, either.
Top

As if I needed more proof that revisits are worthwhile for appreciating a film on an entirely new level, this film played entirely different for me tonight compared to my first watch many years ago when I liked it just fine but did not comprehend the intricacies of what Campion is doing. One could argue that it takes a female auteur's temperament, patience, and expansive worldview to demonstrate such a mature, psychologically complex work, where motivations, fears, defense mechanisms, and subconscious desires brew to reveal themselves as authentic and worthwhile of empathy divorced from the surface-level behaviors. However, Pablo Larraín accomplished a similar effect with Ema, as have many male filmmakers, so regardless of gender, Campion's composed posture, and willingness to meet people where they're at, yields a startlingly adult twist on what appears to be either Oscar Bait or quiet indie fare, but is shoehorned into neither.

The gender dynamics rooted into the 19th century era and place are significant though. Campion doesn't shame Keitel or Neill into unidimensional aggressors for initiating hair-raising actions to forge intimacy, and even Neill's irredeemable immoral acts are clearly born from a pervasive powerlessness all the characters breathe in the air of their social environment, without the coping skills or communicative tools within social structures to maneuver around them. Neill's final scene in the film may be its very best, for how he does eventually evolve into a surrender of vulnerability against all odds- developing as a character just as much as the other principals, perhaps even moreso. Though just as Campion gives the male characters rope, she doesn't conversely champion Hunter or Paquin in absolute measures either, for each also exhibit confusion and impulsivity around emotional turmoil, and capitalize on situations not only out of resilience but from fear and insecurity in problematic, immature ways as well. The focus is on the unconditional value of 'feelings', not higher-level morality, and I love this film today for how faux-tangible judgments are secondary to the celebration of the rare miracles we get to actualize our feelings in tangible forms. This corporeal magic might even allow us to see new colors, access new tools to bridge these gaps and ascend past the isolating, antisocial traps we find ourselves in. I can't wait to see this unconventionally beautiful film in its new restoration.
Top

The special features have been updated to include:

It looks like it was on prior releases in the UK and Australia. Also, you can currently pre-order this in Target's B2G1 sale
Top

The have also included the following: