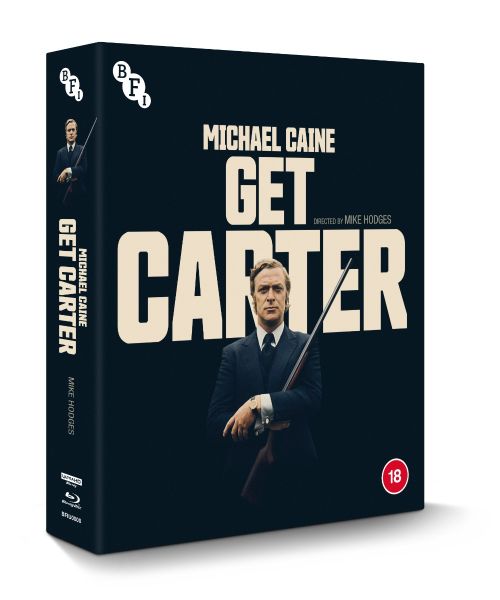 Michael Caine is Jack Carter, the London gangland enforcer who returns to his hometown of Newcastle to avenge his brother’s death. Rarely has the criminal underworld been so realistically portrayed as in this 1971 masterpiece. Shot on location, resulting in a devastatingly authentic snapshot of life in the north east of England in the late-industrial period, Get Carter remains arguably the grittiest and greatest of all British crime films.

Michael Caine is Jack Carter, the London gangland enforcer who returns to his hometown of Newcastle to investigate his brother’s death. Rarely has the criminal underworld been so realistically portrayed as in this 1971 masterpiece, directed by Mike Hodges from his own screenplay of the novel Jack Returns Home by Ted Lewis. Shot on location, resulting in a devastatingly authentic snapshot of life in the north east of England, GET CARTER remains arguably the grittiest and greatest of all British crime films.

Newly restored in 4K from the original camera negative by the BFI, and approved by director Mike Hodges, GET CARTER is back, and looking and sounding better than ever. It will be released by the BFI in partnership with Warner Bros. Entertainment UK Ltd on both UHD and Blu-ray on 25 July 2022 with an incredible collection of extras. Both formats are packaged inside rigid slipcases and come with an 80-page perfect-bound book, a double-sided poster featuring the original UK quad and the 2022 re-release artwork and a set of four postcards featuring iconic scenes from the film.

maybe my insomnia is missing it, but does the UHD edition contain the film on the second bluray? or is it two UHD discs?
Top

The UHD release isn't dual format, so you either have :
- a UHD + an extra BD for some of the extras
- a BD + the same extra BD
Top

As across the board from dvdcompare for the UHD
Top

As expected, BFI have knocked it out of the park. Hope WB allow them to do another title, since this was such a success...or it will be (early call but bound to be in the end-of-year lists).
Top

Can they do something similar to Performance?
Top

Anyone wanting to get a copy of the LE might want to act sooner than later. BFI said on Facebook they have less than 1000 units left in their warehouse, and after that, you're relying on third party retailer stock and ebay scalpers.
Top

I haven't explored the book yet, but the LE is very nice. I never care for these foldout posters, but this one is awesome and I can see myself actually putting it up somewhere someday
Top

I revisited this earlier in the year before the announcement, but another viewing elevated my appreciation for it- less as a gangster revenge flick than an inverted James Bond movie squeezed of its humor, jingoism, and relaxed vibe. There's bare-minimum morality in seeking justice for the innocent -namely the niece, whose corrupted victimization becomes Carter's one agreeable aim- but all the retribution feels wholly self-serving. "Did he know he was my brother" seems as much of an egoist remark as one of personal guilt or punishment enforced on principle. Caine plays into the superhuman sex-magnet vehicle Connery perfected, only opportunistically removed from identification via clinical degradation. It's just such nasty stuff, but the filmmakers know that Bond is too, just dressed up as something false. Here's a brutal gangster operating much the same way- using people as he pleases, evaluating his schema with detached sociopathic awareness, and mistaking narcissism as confidence when they both lead to invincibility. This is why the very end is a sick joke that both cements the film's ethos and destroy's the Bond franchise's at once. I guess if Caine was never going to be Bond, it makes sense that he'd eviscerate the type of character in an anti-entry here. The narrative trajectory and engagement with various levels of baddies on the food chain even fits like a glove, at least as much as it does a neo-noir.
Top

Count me in as another admirer, with my first ever watch being just now with the beautiful new BFI release. At first the film won me over with its slow build. Nearly 45 minutes in and we know very little about this guy's overall mission, and as we move along with him, have uncovered very little. As he starts poking his head in more and more places he shouldn't, Carter is not kicking ass and taking names. Instead, he's frequently on the run. Maybe because I'm just so used to modern action films, I was shocked at how much restraint there was.
SpoilerShow
Using a vehicle as a weapon, Caine opts to knock the door off, without aiming at the person. He kills one person on a boat, and lets some others get away without firing additional shots. It's as if he waits until the awful reveal at his niece to lose that restraint and just be content with a killing spree, in addition to his original mission
. So when the violence really comes to this film, it's earned. And yet it remains so sparse that the tension is always there, never really settled, not even at the end.
Top
Post Reply
11 posts • Page 1 of 1