Discuss DVDs and Blu-rays released by Criterion and the films on them. If it's got a spine number, it's in here. Threads may contain spoilers.
Post Reply
23 posts • Page 1 of 1
Message
Author

Let the Sunshine In 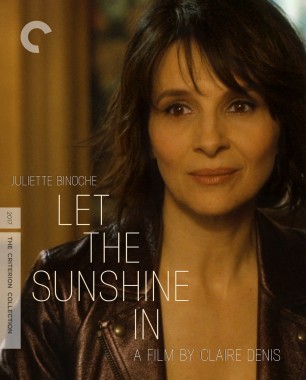 Two luminaries of French cinema, Claire Denis and Juliette Binoche, unite for the first time in this piercing look at the elusive nature of true love, and the extent to which we are willing to betray ourselves in its pursuit. In a richly layered performance, Binoche plays Isabelle, a successful painter in Paris whose apparent independence belies what she desires most: real romantic fulfillment. Isabelle reveals deep wells of yearning, vulnerability, and resilience as she tumbles into relationships with all the wrong men. Shot in burnished tones by Denis's longtime collaborator Agnès Godard and featuring a mischievous appearance by Gérard Depardieu, Let the Sunshine In finds bleak humor in a cutting truth: we are all, no matter our age, fools for love.

hearthesilence wrote: ↑
Sun May 06, 2018 11:51 pm
Surprised no one has written about this yet, especially when it already premiered at the NYFF in October and opened in France a week or two earlier.

The title is pretty cloying. Getting that out of the way, this is a great film and for me her strongest work since 35 Shots of Rum. Worth seeing twice, not because it's difficult - it's very accessible - but because it's a fairly rich and layered work. A pretty verbose film, a transcript of the dialogue would probably read like a fully realized play, but what Denis makes of this material is quite remarkable. (And the way she does it look effortless as well.)

The editing throughout the film is exceptional, particularly a long scene between Isabella and an actor who may or may not be offering an opportunity - in a conversation where direct questions can't be asked and a listener is poring over every word as soon as it's spoken, she knows exactly when to show which party and how close she needs to show them.

In another scene built on the tension of asking a question Isabelle is embarrassed to ask, knowing when to cut is crucial - any cut will disrupt/relax the tension, but filmed as a long and static take, the scene would probably deflate if held too long. She drops in one brief shot, and looking back, there's really no other place that would have worked as well.

And much has been made of the dialogue. film has the luxury of dealing with intelligent and articulate characters - but the men also give away quite a bit about what they want themselves when they're talking to Isabelle about someone else. It's all wonderfully written and impeccably acted.

Juliette Binoche and Claire Denis have been giving Q&A's at Lincoln Center and IFC. I missed them but I'm certain Lincoln Center will eventually upload them on YouTube or elsewhere. From my experience, Binoche is usually great, talking about the process in great detail (she's possibly the most edifying guest I've encountered at any Q&A) and doing it with great charm, so definitely go if you get a chance.

God, let's hope not. I think it is one of her worst films. I saw it at a Film Festival and everyone around me hated it too.
Top

God, let's hope not. I think it is one of her worst films. I saw it at a Film Festival and everyone around me hated it too.

I wasn’t over the moon for it, but it had its moments. It’s with IFC, though, so the big C has first dibs, and I can’t imagine them passing up a Denis film that was pretty well-received by most...
Top

Let the Sunshine In is to Claire Denis as My Blueberry Nights is to Wong Kar-Wai. It has so little confidence in its final scene (featuring Gerard Depardieu) that it runs the credits over it, like an episode of Veep. I hope the upcoming Robert Pattinson sci-fi sees her back on track.
Top

Running the credits over that scene is the best cinematic decision I've seen in years, you completely missed the point

*Actually, on reflection, the endings of Good Time and Call Me by Your Name were similarly effective--maybe I just have a type
Top

I haven't seen this movie, but sounds like the late period Hitchcock sudden ending that Chabrol lifted and expanded for his own later films, perhaps most effectively in La Demoiselle d'honneur
Top

It’s really not a sudden ending at all, though. It’s more like earlier Gus Van Sant films, where the credits roll over the last shot. Only there’s extensive dialogue.
Top

That occurs in the Chabrol films too (as in a film probably more people have seen, La Ceremonie), but again, I haven't seen this one to compare
Top

I've seen (and love) those Chabrols though I'm not recalling specifically how their final scenes function within the greater narrative. Here it's a playful callback to the various component parts of the film you've just watched, and it ties a neat little bow on everything.
Top

My review of the AE BD:

Final scene/epilogue of Takahata's Omohide poro poro / Only Yesterday (over which credits run) -- sublime. Not any hint of "lack of confidence" shown by this (at least in Takahata's case).
Top

swo17 wrote: ↑
Fri Aug 10, 2018 1:07 pm
Running the credits over that scene is the best cinematic decision I've seen in years, you completely missed the point

*Actually, on reflection, the endings of Good Time and Call Me by Your Name were similarly effective--maybe I just have a type

I think the Denis ending is different, though, and much weirder. The other films have gestures of narrative and formal closure before the credits start rolling. With Good Time, for example, it's basically a return to the location and situation of the film's opening scene. And the dialogue--mostly the repetitive drone of the instructor--doesn't announce itself as something we should be paying close attention to.

By comparison, in Let the Sunshine In, there's little warning that this will be the last scene, and its dialogue is no less voluminous and charged as in any other scene in the film. There's basically a loud, minutes-long clash of two gestures, one telling us the film is over and the other telling us the film is still going.... I found it so strange and disconcerting that I had to laugh. I'm not sure what it adds up to—it's almost too easy to read it as meaning something like "her search for romantic contentment will never be resolved"—but I appreciated it as a genuine mindfuck.
Top

SpoilerShow
I took the ending to have happened before the rest of the film, with Depardieu serving as a kind of fortune teller suddenly providing a guiding force to what had initially seemed like Binoche's aimless romantic wanderings throughout the film. I think having the actors' names start to appear on the screen as they're being "introduced" through the dialogue works as a punchline to the joke.
Top

swo17 wrote: ↑
Sat Aug 18, 2018 3:19 pm
SpoilerShow
I took the ending to have happened before the rest of the film, with Depardieu serving as a kind of fortune teller suddenly providing a guiding force to what had initially seemed like Binoche's aimless romantic wanderings throughout the film. I think having the actors' names start to appear on the screen as they're being "introduced" through the dialogue works as a punchline to the joke.

I saw this on the plane (dreadful way to watch movies!), and liked it quite a bit, despite being only half awake. Having read this thread in the meantime, I decided to watch it again on my return flight, and pay particular attention to the ending. I really like your interpretation -- one that hadn't occurred to me -- and an aspect in its favour is the abrupt, non sequiturial way the scene begins. But I'm not certain that it works because
SpoilerShow
Binoche comes to the meeting prepared with one a photograph of one of her lovers (the actor?), suggesting would it not that the ending really is occurring after the previous events?

Either way, I found the ending effective. The tone seemed ambiguous -- was it despairing or not? At the same time, it was unambiguously comical, the way Depardieu kept going on an on...
Top

SpoilerShow
I'd have to pay close attention during another viewing to verify, but weren't some of her trysts with previous acquaintances?
Top

swo17 wrote: ↑
Sat Aug 18, 2018 3:19 pm
SpoilerShow
I took the ending to have happened before the rest of the film, with Depardieu serving as a kind of fortune teller suddenly providing a guiding force to what had initially seemed like Binoche's aimless romantic wanderings throughout the film. I think having the actors' names start to appear on the screen as they're being "introduced" through the dialogue works as a punchline to the joke.

That's certainly an interesting reading that would seem to make more sense of the final scene.

Personally I found it similar to a few other recent Binoche films like Sils Maria or Elles, doesn't really try to give us a grand dramatic arc for a character/s so much as a small glimpse of them. Maybe doesn't have the ambition to be any kind of masterpiece but its still well made and entertaining cinema if you have the taste for it.
Top

Let the Bassoon Shine In
Top

I'm surprised that this appears to feature a different subtitle translation to the US theatrical release...

SpoilerShow
Specifically, in the last scene, it definitely originally used the translated title at the very end, with Depardieu saying to "let the sunshine in," but as presented here they literally translate the original title. Which I guess is more accurate but I'm surprised Criterion would actually make a change like that, especially for a contemporary film's first home video release.
Top

SpoilerShow
When the movie premiered, the English title was Bright Sunshine In, so I'm guessing somebody (IFC?) revised that line to echo the new title. The trailer for the Hong Kong release (which was incidentally under the original English title) uses a literal translation of that line as well, so the Criterion release wasn't the first to do it.
Top

Denis is on record as hating the title Let the Sunshine In, so there's that.
Top

Surprised she doesn't mention that the English title is a completely inapposite allusion to Hair!
Top
Post Reply
23 posts • Page 1 of 1