Rambo V will be premiering at Cannes
Top

From this it sounds like they're just going to show images from it, alongside a montage celebrating Stallone's career and the 4K restoration of First Blood.
Top

Aw fuck, you're right. I only saw the original tweet, which was in French.
Top

Not the day's only Stallone-related news...
Top 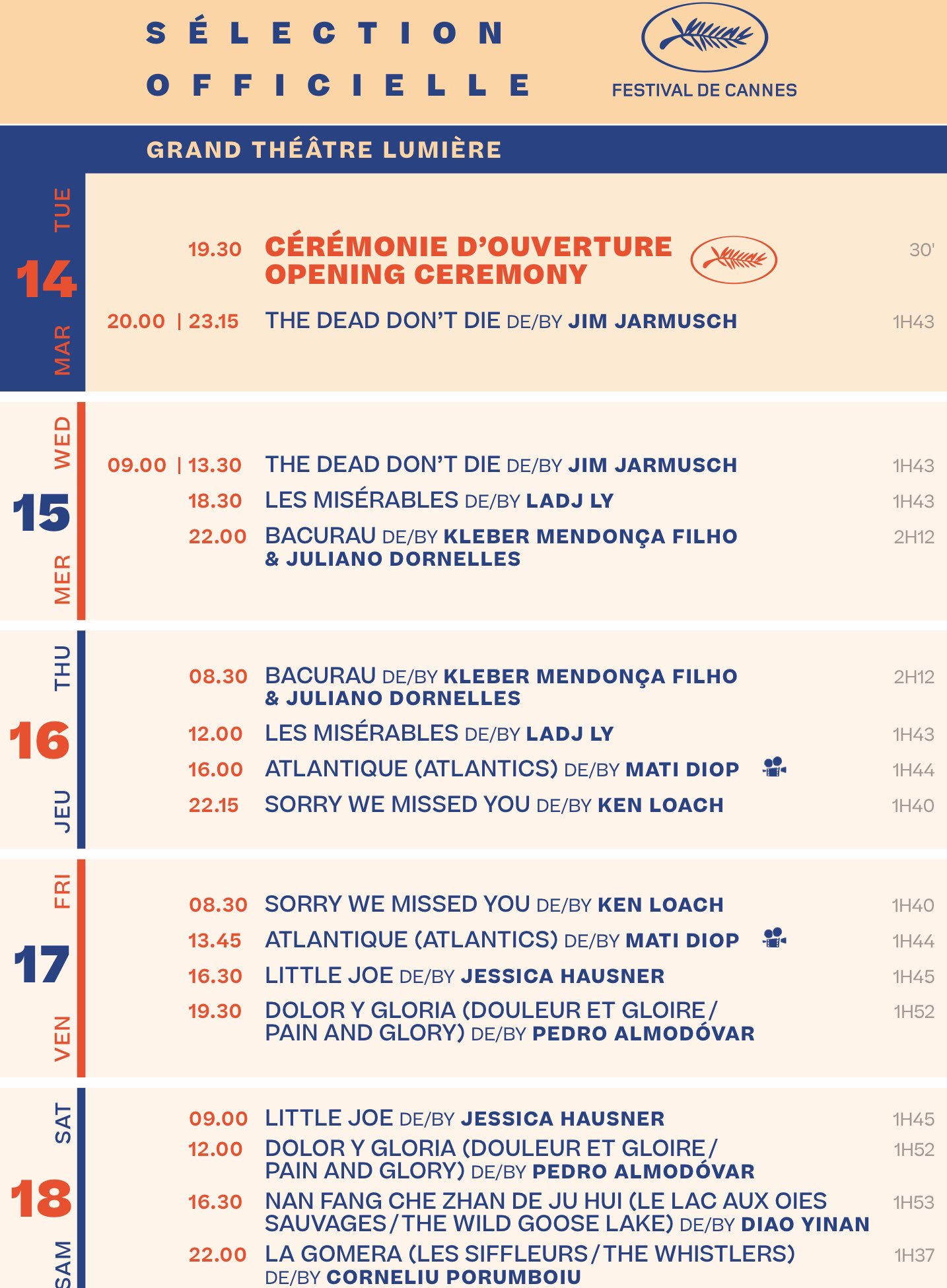 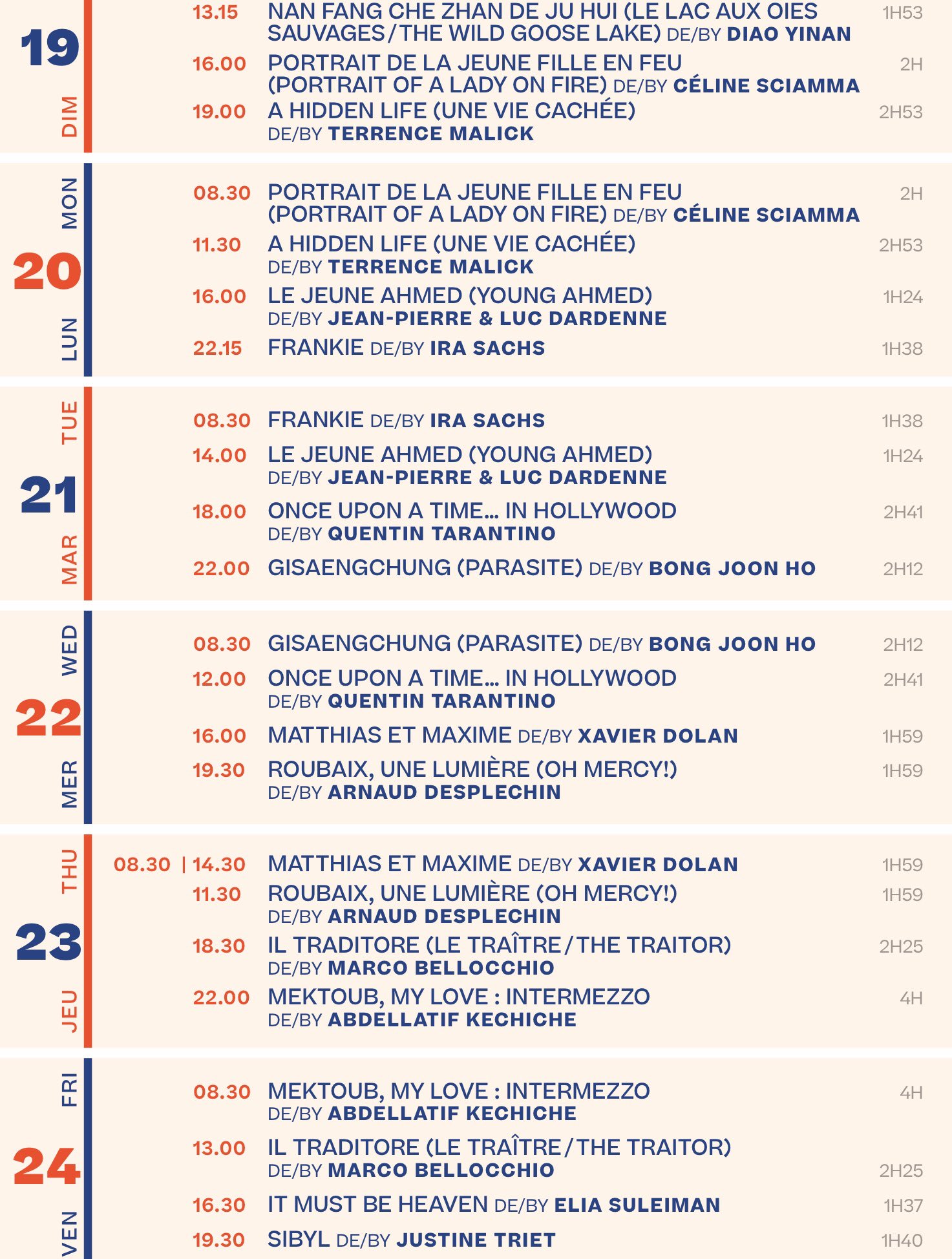 And premiering at 10 PM

Does this mean competition slate for the Palme are closed? Or have Cannes managed to add more after the schedule was done? Also, is it always like that, that the final two films get only one screening?
Top

I didn't realize Sibyl was the closing film. Do films shown at the end of the festival historically have better or worse odds for garnering jury recognition?
Top

Much worse would my immediate guess, but I'd have to really analyze the results for that to be more than an anecedote-backed nebulous feeling either way.
Top

The last films shown in competition (the actual closing film is shown out of competition after the awards ceremony):

^Yeah, I'd say it's a crapshoot predicting anything based off when it screens. It's tempting to look at Almodóvar's slot in the first weekend, and think that's it well-postioned for the Palme, and it may indeed build buzz throughout the festival, but ultimately there'll be a bunch of people in a room making compromises before eventually landing on something decent-ish, unless something obvious like The Tree of Life or Winter Sleep lands in their lap.

The Class screened near the end of the festival, but The Wind that Shakes the Barley screened at the beginning. I think the only statistical constant is that the opening film never wins...perhaps anything, really. They also do seem to screen debut features very early, before everyone arrives in full, ala Son of Saul, Yommedine, and Les Miserables this year.
Top

I'll ask again, has Cannes ever added more films after publishing the schedule? And why do the last two films only get one screening?
Top

I don't know the answer to such a specific question. My guess is no, regardless of a Apocalypse Now, because there are only so many theatres and so much time. Ever since I began following it in 2005, certainly none of have been added to the official selection. Suleiman and Triet only get one screening in the Lumiere; they'll screen elsewhere during the festival.
Top

So basically the lineup is done. Guess the only additions promised were Tarantino and Kechiche
Top

Sounds great, so it'll be deeply disappointing if this gets buried or cut against Yimou's wishes.
Top

Iñárritu was quoted as saying, when prompted about judging the competition slate: "I will not call it judgement. I don't like to judge films. I like to be impregnated by them."

Between he and Lanthimos, they'd better open the windows in the jury room or the hot air is going to suffocate everyone.
Top

The original duration for the QT was 3h and is now refined at 2h41. From its very rounded up screen time, I'd say Kechiche himself still doesnt know how long it will be exactly, and it might be shorter than that (just like the Tarantino).
EDIT : I've been pointed out that the short extract shown during the opening ceremony is from Canto Uno.
Last edited by tenia on Wed May 15, 2019 6:22 pm, edited 1 time in total.
Top

Interesting whilst watching the Cannes red carpet broadcast for Les misérables, the first feature directed by Ladj Ly expanded from a short film of the same name, to note that he is part of the Kourtrajmé Productions collective which also includes Romain Gavras (the son of Costa-Gavras and director of Our Day Will Come, The World is Yours, both starring Vincent Cassel, and a number of music videos including for Jamie_xx's Gosh), Kim Chapiron (director of Sheitan, starring Vicent Cassel, and Dog Pound) and JR (the companion of Agnès Varda in Faces Places). I had not made that connection before!

Also the trains on Elle Fanning's dresses appear to be getting bigger and bigger with each passing day! And we are only at day 2!

I also had not realised before that film's red carpet event that Udo Kier is appearing in the latest film from the director of Aquarius, the "Brazillian Western" Bacurau!
Top

Sounds great, so it'll be deeply disappointing if this gets buried or cut against Yimou's wishes.

Supposedly it will get a (possibly much-re-edited) low-key, mainland Chinese release eventually. Probably zero chance of ever seeing the film in the form Zhang intended.
Top

Twitter thread with links to English-language reviews of Filho and Dornelles' Bacurau.
Top

Yeah, Bacurau is definitely the one getting the more passionate responses so far and it likely will remain near-the-top of the "must see" pile when the festival is over---a leftist science fiction-Brazilian western from the director (and another) of Neighboring Sounds and Aquarius.

This was sufficiently covered in its thread in the other forum, but the reception for The Dead Don't Die didn't seem that bad, just muted, one you definitely catch in theatres because it's Jarmusch, but only a matinee.

Regarding competition debutantes: All I'm really getting out of Les Miserables is that it's conventional and good at its conventionality. It seems like it's only in competition because it's French and Important, and all the wrong people seem to love it. I've read comparisons to Capernaum, as in one for the not-into-art-films-but-somehow-at-Cannes folks. At least it's getting a reaction, unlike last year's Yommedine. Mati Diop's Atlantique is definitely looking like a watch at least, if only because she's not playing it conventional, integrating supernatural elements into her first film. There have been pockets of praise and polite reviews for it---definitely the sort of film that wins an award if George Miller is not at the head.

Balagov's getting comparisons to Loznitsa, which is something, and I've read it's this year's why-not-competition title, ala Bi Gan last year, but I haven't delved into the reactions thoroughly yet.

Competition-wise, Loach and Hausner are on deck. Loach will likely be Loaching; it'll be relevant and competent, but I doubt it'll inspire awe. Hausner's high-concept film is intriguing, but seems like it could go to either extreme. Really, everything seems at a pleasant hum before Almodóvar's already effusively praised film lands, with Porumboiu's comedy, which sounds like it could play well here (and win the Screenplay award), Triet, and a Malick meteor not far behind.

Lastly, apparently Oliver Stone's The Doors is playing their beach screenings, and I really cannot imagine a worse thing to watch on a beach at Cannes. EDIT: From this year, Easy Rider.

Here are some links to some good polls:
http://www.todaslascriticas.com.ar/cannes/2019
http://cannes-ratings.herokuapp.com/2019
Top

From what I heard, Spanish critics were lukewarm towards Almodovar's latest when it opened locally in March but perhaps the global critics will like it better. I think either Variety or THR reviewed it upon its Spanish release and it wasn't a rave either.
Top

The first site seems great, but I wish the second one had better sourcing—who's the "Bruhhh" who has (supposedly) seen Matthias and Maxime and gave it a 10? Why does it include a five-star Letterboxd review for Parasite that dates back to early April and is evidently just based on the poster and teaser? Still interesting to see what films are apparently under embargo and which ones are still totally under wraps.
Last edited by The Fanciful Norwegian on Thu May 16, 2019 6:20 pm, edited 2 times in total.
Top

Along with Bacurau and of course the Malick, at the moment Céline Sciamma's Portrait of a Lady On Fire (with Valeria Golino!) is most interesting to me, to see a filmmaker more known for contemporary set stories working on a period piece.
Top
Post Reply
350 posts