A substantial catalogue (in both German and English editions) is published by Hatje Cantz and available through Amazon, Book Depository, the Albertina itself and the publisher's own website...
Top

ellipsis7 wrote:Not every day two new (albeit relatively minor) entries are added to Antonioni's filmography - a couple of promotional shorts from 1956 for a new daily newspaper then, IL GIORNO... Prints of the films have surfaced on Ebay....

Hard to believe, but on e-bay the Antonioni shorts received no bid at all... La Cineteca del Friuli eventually bought them, and they will be screened at Trieste in September.
Top

Antonioni exhibition (previously shown at Ferrara & Brussels) opens today @ Cinematheque Francaise in Paris, those two newspaper commercials screening as part of the parallel retrospective... This is an interesting virtual exhibit 'travelling' through his length of his career...
Top

ellipsis7 wrote:Antonioni exhibition (previously shown at Ferrara & Brussels) opens today @ Cinematheque Francaise in Paris, those two newspaper commercials screening as part of the parallel retrospective... This is an interesting virtual exhibit 'travelling' through his length of his career...

I am planning on taking the short trip to see this exhibition. Loved the Demy exhibition 2 years ago that CF did.
Top

Not sure if this has been posted before (just saw it on Soderbergh's site): 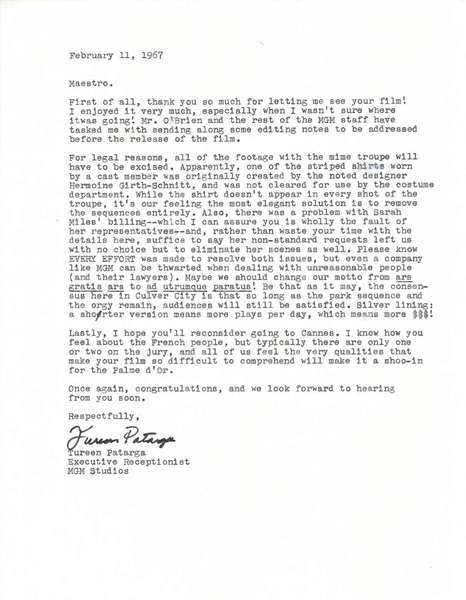 The film premiered in the US in December 1966, though, so the dating of that memo makes no sense. Isn't this just Soderbergh being a prankster, telling us what he decided to cut out in the form of an "authentic" document? "Tureen Patarga" turns up zero results on google, also.
Top

oh yeah wrote:The film premiered in the US in December 1966, though, so the dating of that memo makes no sense. Isn't this just Soderbergh being a prankster, telling us what he decided to cut out in the form of an "authentic" document? "Tureen Patarga" turns up zero results on google, also.

That's completely possible, in which case I now look like a total idiot

It must be Soderbergh's prankster intro to his cut, not only because of the date of the US release, but the content of the letter itself (which is rather absurd). "Noted designer" Hermoine Girth-Schnidt sounds even more fictitious than Tureen Patarga.
Top

That's most definitely a Soderbergh fabrication. That's definitely his sense of humor, and names like "Hermione Girth-Schnitt" (Schnitt=cut) and "Tureen Patarga" are right up there with "Fletcher Munson" and "T. Azimuth Schwitters" (characters from Schizopolis).
Top

Presented with Luce Cinecittà, Rome, and featuring nearly forty 35mm prints and digital preservations, this first complete retrospective in New York in more than a decade celebrates the writer-director’s legendary collaborations with Monica Vitti—the trilogy of L’Avventura, L’Eclisse, and La Notte, which Pauline Kael myopically dismissed in her infamous essay “The Come-Dressed-As-the-Sick-Soul-of-Europe Parties”—as well as Red Desert, Blow-Up, and The Passenger. It also foregrounds Antonioni’s sociopolitical concerns through his neorealist documentary shorts and through his impressionistic yet incendiary Chung Kuo, Cina (1972), which lifted the Iron Curtain on China during the Cultural Revolution. Comparing the “antique and silent” beauty of Ferrara, his childhood town, with his “hard and hostile” experience of Rome, Antonioni might well have been describing the tensions within his own films: abstract, elliptical narratives involving men and women who are estranged from each other, from nature, and from themselves, and who drift through landscapes reflective of their existential despair and yearning.

I typically skip DCP's, but I'll catch that new 4k restoration of Red Desert. I think the last complete retro was the one BAM put on around 2009 and 2010. I only knew a few films by Antonioni, but after plowing through another 6 or 7 films, I came to believe that he was THE greatest of all Italian filmmakers. Since then my appreciation for Rossellini has also grown enormously as I've been able to watch more of his films too. Amazing to think so many of their films were tough to track down here in the U.S. for so long.
Top

It would be nice if Antonioni's short documentaries could be collected on disc.
Top

The 4k restoration of Red Desert is inferior to the rather old restored 35mm that is still in circulation and recently screened at the Metrograph.

Watching the 4k was a bizarre experience. Some scenes are too dark, and the famous colours just disappear. Others are too bright. Flesh tones are washed out almost throughout. But oddly it varies from scene to scene.

The black house that appears in the antenna scene should be absolutely pitch black. The whole point of that house being in various shots is to provide an almost 3D perspective, which in the 35mm is achieved by its utter blackness. In the 4k, it's just some house. Another example of the 4k being too bright.

The famous DCP blur is there. At one point Vitti picks up a book. I've forgotten the title/author, but in the 35mm it is clearly visible. In the 4k it is not. As in any MA film, he doesn't have scenes like this for no reason, so the "restoration" ruins it.

The 35mm has cold colours throughout except the beach scene. In the 4k, the beach scene is not sufficiently different, although clearly MA intended that scene to have a totally different colour scheme. In the 35mm, it's like switching to super-technicolour.

I generally avoid retro DCPs but I have noticed that many have a few bits where the "film" gets jerky. As if a few frames are skipped. I have never seen this in current-release DCPs, but it happens in restored versions on occasion. Fortunately this was only a problem a few times in Red Desert. But still.

There are a handful of typos or awkward translations in the 4k, although generally it follows the (perfect) 35mm translation word for word.

Upshot: see the 35mm if you can. It is GORGEOUS.
Top

Anyone see Chung Kuo at MoMA? A screening of this title is rare enough. Not only is this the full-length version, it's reportedly an excellent 35mm print.

Thanks to the weather, I won't be back in time to see it, but Jim Hoberman has already hailed it as a masterpiece and Nick Pinkerton has also praised it as a major work.
Top

hearthesilence wrote:Anyone see Chung Kuo at MoMA? A screening of this title is rare enough. Not only is this the full-length version, it's reportedly an excellent 35mm print.

Thanks to the weather, I won't be back in time to see it, but Jim Hoberman has already hailed it as a masterpiece and Nick Pinkerton has also praised it as a major work.

I've read quite a bit about it and certainly know why it's rare to see. I know that a copy was available from Mr. Bongo but it was brought to my attention they don't always do things legally. This is a pretty big deal it's being shown. The film was very much intended to be propaganda (By the Chinese officials) but Antonioni didn't comply in the way the Chinese officials wanted wanted. One shot in particular, a passing shot of the underside of a bridge infuriated the government because they wanted to give off the impression that the architecture was flawless. (It was not and apparently looked quite shoddy.) An interesting bit of trivia but it should give you some insight into not only what Antonioni's mindset was but also the Chinese governments at the time. There is also I believe a particularly graphic sequence is which a Caesarean section is performed. In this sense Chung Kuo is pretty naturalistic and that's precisley why the Chinese government hated it.

I realize this isn't exactly what you wanted but I hope it gives some insight into what it actually is supposed to be. It's a dream release from any legitimate label for me.
Top

Thanks for the info - I was unaware of this film until the Antonioni retrospective was announced a month ago, and it wasn't until the past week that I saw any reviews on this film. They all discussed its problems with the Chinese government, but I wasn't seeing any specific details of what may have been offensive within the film itself. It's amazing to me that an excellent (possibly pristine) 35mm print of this film even exists - it was shot in 16mm and primarily broadcast on television (apparently in a much shorter cut in the U.S.) before being more or less shelved.
Top

The (formerly) official Chinese line on the film is laid out in this interminable piece, and while I won't go so far as to claim that the anonymous commentator made these criticisms entirely in bad faith, the fact that they were given such a prominent airing (or any airing at all) probably had a lot more to do with factional struggles than the actual film—Antonioni made it at the invitation of Zhou Enlai and the campaign against it was the initiative of the rival grouping around Jiang Qing, who hoped to embarrass and weaken the Foreign Ministry that Zhou controlled. In other words, I think anything Antonioni might've produced would've come in for similarly vituperative criticism. (As an aside, a secondary target of the anti-Zhou maneuverings was Deng Xiaoping, who of course later made a spectacular comeback; apparently Antonioni was invited back to China in the early '80s after Deng's elevation to paramount leader, but Antonioni refused because the Chinese government wouldn't give him a formal apology.)
Top