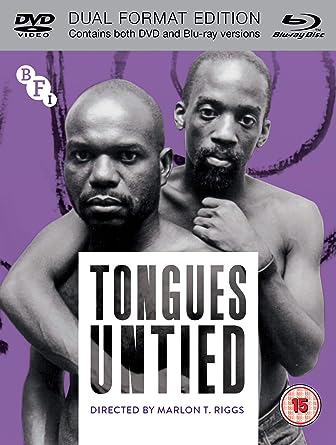 After its 1989 release and subsequent screening on public television, Tongues Untied polarised critics with its unapologetic portrayal of black gay experience in America. Part documentary, part performance, it was described as the film we have been waiting for by critic Cary Alan Johnson and vilified as a misuse of public funds by right-wing presidential hopeful Pat Buchanan. Such divided opinions were testament to the films lasting impact as a powerful depiction of the ongoing black liberation movement, twinned with devastation of the AIDS crisis. 30 years on, the poetry of Marlon Riggs himself, as well as performances from Essex Hemphill and Brian Freeman, comprise a unique record of a critical historical moment with fierce intelligence, virtuosic rhythm and courageous hope that still stuns today.

Glad to see this pop up. Riggs is one of the best documentarians of all time despite his short existence. He's probably the only David Holzman styled filmmaker I enjoy because of how beside him the autobiography comes across. There are so many touching moments in Tongues Untied that remain powerful because of their sense as being a historical moment.
Top

Really, really happy this is getting a release. My only complaint is that they didn't make it a "Complete Works." All that's left is Black Is... Black Ain't, Ethnic Notions, and Color Adjustments... I might wait a minute to see if someone does something like that in the US. For now, all his works are on Kanopy, if anyone wants to sample them.

It would also have been great to have included Karen Everett's documentary about him, I Shall Not Be Removed: The Life of Marlon Riggs. I saw it a few weeks ago with Everett in person (and Rigg's partner, Jack Vincent, a surprise guest in the audience), and it's a fantastic and moving overview of both his personal and professional life.
Top

BFI Store wrote:Please note that due to unforeseen material issues, we have had to postpone the UK release of Tongues Untied from this coming March to later in 2020. More details to be confirmed as soon as possible. Apologies for any disappointment caused.

Amazon page was showing a delay to fall 2020 since a few days now.
Top

Someone at the other forum says the BFI told them this release is cancelled, and the pre-order appears to have disappeared from the BFI Shop. Shame if that's true. I was really looking forward to this release.
Top

I asked BFI on Twitter and they confirmed it’s not going ahead:

“Hi, we were really looking forward to releasing Tongues Untied but unfortunately are unable to proceed due to contractual issues

Someone at the Blu-ray forum mentioned they asked about this on the BFI DVD & Blu-ray group and Ben Stoddart said that he thinks this is getting a Blu-ray in the US. Hopefully that happens.
Top
Post Reply
8 posts • Page 1 of 1