since Richard Brooks is already in the Criterion collection that's been a while that I'm looking desperately for a Criterion Blu-Ray (or simply a Blu-Ray (since even no WEB 1080 release are available) of this intriguing movie with Diane Keaton (IMHO one of her best role) : Looking for Mr. Goodbar
I still remember the disco scenes (great disco soundtrack; a kind of "Saturday Night Fever" but with a proper soundtrack

), Diane Keaton character being a teacher, another great small role by Richard Gere, and the unexpected ending with the stroboscopic effect (which would probably need a "warning for epileptics" sticker on it)
I think that this is really a great acting by Diane Keaton which is gorgeous in this movie

- instead we got "An Unmarried Woman" which is not a bad movie with the lovely scene of the mother and her daughter singing together (with some bad chords) "Maybe I'm Amazed" by Paul Mccartney...
I really like the editing (it kind of reminded me something between Nicolas Roeg (although it's not as daring) or Ken Russell for the fantasy scenes.
Really this is such kind of difficult to find movie which would be happy to get a blu-ray treatment by Criterion. In the 90's that was Criterion's job to put out such gems.

In the meantime I'm happy with "Straight Times" with Dustin Hoffman (in web 1080 release). So, how much longer we have to wait before seeing Theresa Russell as the lovely temporary secretary (and who would not like to get a job interview (which turned out to be a job dating with an half "yes") with Mrs Theresa Russell ? (especially since they already talked about "Straight Times" in "Thief" since Michael Mann was on it at the beginning - thus a lot of interesting bonus could be done)

that was my Criterion wishes for the week-end

The soundtrack to Looking for Mr Goodbar is an amazing disco era soundtrack. Blows away the Saturday Night Fever soundtrack IMHO. But isn't that the problem with this getting a bluray release, the music rights are a mess. It hasn't even gotten a DVD release.... But we can only hope

... and Dianne Keaton is great in it.
Top

I am indeed under the impression that music rights are the problem - and clearance would be far beyond the budget of a single independent label, even if Paramount was minded to license it to them.
Top

I don't think Looking for Mr. Goodbar is even streaming or for digital rental anywhere, so that cost may be even above what Paramount is willing to consider.
Top

I've wondered if some boutique labels would consider kickstarter campaigns for music rights. I don't know if it would be out of the realm of possibility, or even if it would be successful, but I would be down to put some money to get a release. Blu-ray releases of John Waters' MONDO TRASHO and of Brooks' LOOKING FOR MR. GOODBAR would be amazing, but obviously those music rights come with a hefty price tag.

On the other hand, I know that Wim Wenders' THE GOALKEEPER'S FEAR OF THE PENALTY/THE GOALIE'S ANXIETY AT THE PENALTY KICK had issues with the use of an Elvis song, so he used the song sung by a different person (just had to pay the writers, not the artist). Not the most ideal of scenarios, but also an option.
Top

One of the more elegant solutions to this dilemma was carried out by the BFI for Ken Russell's Song of Summer, which originally opened with Eric Fenby accompanying an unclearably expensive Laurel & Hardy film. So what the BFI did was replace the footage with a scene from a similar Walter Forde comedy that they owned outright, which had the happy side-effect of making that section of Russell's film more historically authentic, as the L&H clip was from a film released many years after the scene in question was supposed to have taken place.

It's certainly a better solution than just cutting the prologue entirely, which other video releases and broadcasts opted for.
Last edited by MichaelB on Sat Sep 12, 2020 4:00 pm, edited 1 time in total.
Top

I think replacing footage is a step too far, though. I’d be for a big red block covering most of the screen like in the R-rated version of Storytelling
Top

This discussion makes me realize that there's more than one reason Flaming Creatures will probably never be licensed for home video...
Top

Aren’t the Warhol and Paul Morrissey films in a similar situation where due to the soundtracks/background music they lack a physical release? I know when I saw Vinyl in Pittsburgh, the curators said that it is unlikely it will see release due to, on top of other reasons, the use of The Rolling Stones and The Kinks. I hope we have a Criterion release of Morrissey/Warhol films in a boxset with the full length version of Empire!
Top

I have the Looking for Mr Goodbar CD, which I don't think is available any longer. It was put out by Pendulum Entertainment Group whoever that is, with Sony being the distributor copyrighted 1997
Top

Would it be a better idea for Shout Factory to release something like LOOKING FOR MR GOODBAR since they have a better relationship with the music industry and could potentially broker a better music licensing deal?

It would be great if Criterion could slap a spine number on the film, but really at this point, I would buy a blu-ray regardless of who distributed it.
Top

KJones77 wrote: ↑
Sat Sep 12, 2020 3:00 pm
I don't think Looking for Mr. Goodbar is even streaming or for digital rental anywhere, so that cost may be even above what Paramount is willing to consider.

I have just found recently a web tv channel digital in the proper ratio but SD not 1080.
I was wondering if there was an hint at one time in one of Criterion's drawings about releasing Mr.Goodbar ?
Top

Rupert Pupkin wrote: ↑
Sat Sep 12, 2020 7:50 pm
I was wondering if there was an hint at one time in one of Criterion's drawings about releasing Mr.Goodbar ?

It was actually a drawing for LIFE IS SWEET.
Top

Since MGM seems to be licensing out pretty much everything (Mad Max/Kino), Criterion should really pick up RAGING BULL and do a UHD. Big director, big actor, highly acclaimed undisputed classic with mass appeal that is in B&W which it will make it stand out amongst the boutique UHDs.

If not Criterion, then hopefully someone else. But really it is perfect for Criterion.
Top

domino harvey wrote:I think replacing footage is a step too far, though. I’d be for a big red block covering most of the screen like in the R-rated version of Storytelling

In the specific instance that I cited, it was clearly the sensible thing to do, because all that was needed to make the dramatic point was footage of a silent comedy - the presence of Laurel & Hardy specifically was completely unimportant. Your suggestion would have been far more distracting, as it would take the viewer out of the film at precisely the point when they’re supposed to start getting engaged with it.
Top

I mean, it wasn’t a serious suggestion, but BFI replaced original footage with different footage. Just because it is seamless doesn’t make it much different than 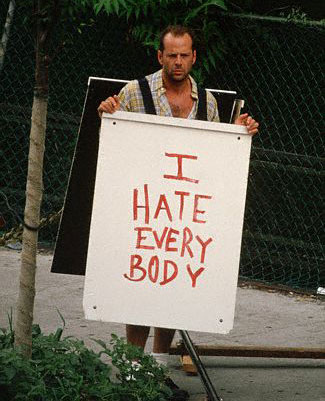 Literally all that's required for the scene to make its narrative point is for a silent comedy clip to be visible: it makes not one iota of difference which specific comedy clip as the dramatic focus is on the music rather than the images. I daresay Russell picked Laurel & Hardy in the first place because the footage was conveniently to hand in the BBC vaults.
Top

Sorry for the delay folks, but the Speculation Rodeo is back once more! (Dec 2020 edition)

Mouchette - Random upgrade, not speculated - other than some musings based on its recent restoration

Alright, time for what everybody's been waiting for, who's going to go home with that Golden Lariat! It was a tough battle this time with four competitors with one winning ride each. But of course there can only be one victor. And this month's Golden Lariat goes to:

For being the only person to correctly guess Crash (and surprise guesses are worth more). As always you can pick up your prize at the concession stand.

There are few things you can count on each month, but even with short delays, there'll always be a Speculation Rodeo! Until next time, remember the best things in life are free.
Top

movielocke wrote: ↑
Tue Sep 15, 2020 2:43 pm
33 upgrades if you count the 4xVarda as being upgraded and count the seven Fellini titles as being upgraded. ...in spite of thinking a year ago that 2020 would have a lot of studio canal upgrades, we got none, (since both are just reissues of already upgraded titles).

You mentioned the Fellini box titles separately, but Nights of Cabiria is a genuine StudioCanal upgrade.
Top

Already composing a mental wishlist for 2021 Criterion releases, I was wondering if anyone has heard any rumors about De Sica‘s „Il boom“ possibly joining the collection? Studio Canal recently rereleased it in 4k.
I also stumbled across these two 4k rereleases which I would love to see in the collection: Peter Bacso‘s „The Witness“ and Alain Corneau‘s „Serie Noire“ (Studio Canal, I believe).

Any thoughts or comments would be great.
Top

Serie noire is already out via Film Movement
Top

Esterhazy wrote: ↑
Fri Sep 18, 2020 10:39 am
I was wondering if anyone has heard any rumors about De Sica‘s „Il boom“ possibly joining the collection? Studio Canal recently rereleased it in 4k.

You mean a 4k restoration or a 4k UHD? I saw this a few years back at the Film Forum. It's terrific. It was the 4k restoration. Its US rights are with Rialto. I don't remember seeing a Studio Canal logo before hand. I also would love to see this. I had asked a FF* programmer if this and other Riatlo films were coming to Criterion. He said he didn't think so, and then Panique got a release. So who knows.