British documentary veteran Peter Pickering, whose filmography began in 1942 and included a huge number of films for the National Coal Board, his major employer throughout a several-decade career.

I met him when working on the BFI's great postwar documentary project of a decade or so ago (one of my specialist research areas was the Mining Review newsreel), and he was as delightfully unpretentious as his films, sounding genuinely baffled as to why anyone should want to dig them up decades later. But of course they're riveting social history now - he could never have imagined when filming them that he was documenting a way of life that would have pretty much vanished well within his lifetime.
Top

Darlanne Fluegel died three years ago from Alzheimer's disease. I only discovered this today, and it appears her death was never noted here.
Top

I am getting a little worried now about who Asif Kapadia is going to do a documentary on next.
Top 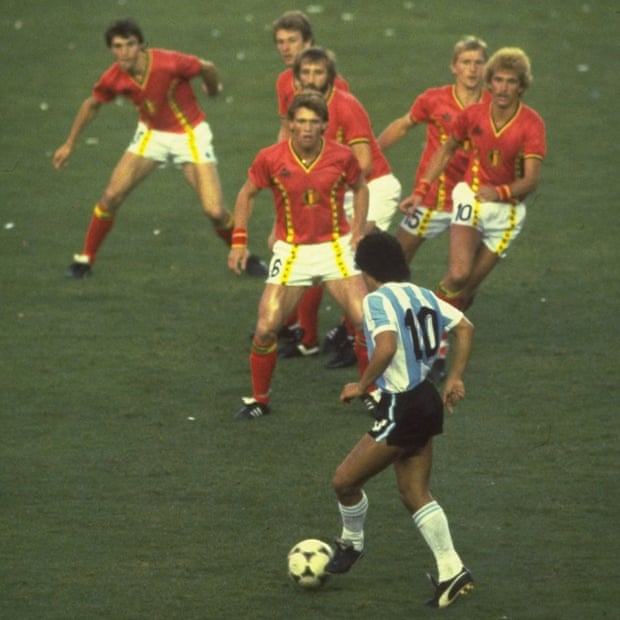 I can't see a proper online obituary just yet, but Sandy Harbutt, director of Stone, died on the 21st at age 79.
Top

A 10 min vid focusing on Maradona with the ball v. England in the 84 World Cup.
Besides the two goals, Maradona does a lot of next level ish all game. A lot of impressive wizardry, especially in the scoreless 1st half.
Top

That's very sad news. I'm afraid that I have not yet seen Elio Petri's Property Is No Longer A Theft, but she has amazing roles in Argento's Deep Red, where her character almost singlehandledly twists the film away from a giallo-horror into a kind of screwball romantic comedy whenever she appears, and as the tormented subject of a jealous, maybe supernaturally possessed, son in Mario Bava's final film Shock. Plus the one 'innocent' figure in arguably Argento's best film, Tenebrae...
SpoilerShow
who seems to be so innocent of all of the double dealings, double lives, and alterior motives going on among all of the other characters that she is the only figure to be saved from death at the climax, albeit by unwittingly becoming a killer herself! Although we perhaps get the sense from her screams providing the counterpoint to the end credits that she may have ironically been left mentally broken and traumatised by the experience in a way that bookends the initial traumas that had created the killer(s) in the first place.
And of course she provided the inspiration for and co-wrote Suspiria and in doing so pushed the course of Dario Argento's career into some more fantastical directions. We just have to slightly overlook the way that Argento somehow found ever more brutal ways to offhandedly kill off her characters (albeit in spectacular fashion!) in the films from Tenebrae onwards.
Last edited by colinr0380 on Fri Nov 27, 2020 7:05 pm, edited 2 times in total.
Top

From what I have understood over the years is that she is may be responsible for the bulk of writing Argento's scripts or at least the ideas/scenes when he had that string of 70's hits: Suspiria, Deep Red and Tenebrae of course going uncredited and letting Argento have most/all the credit. If anyone can shed light on this to confirm or deny that'd be great but that's been burned into my mind forever and this is tremendously shitty news in a long strong of all the people we lost this year.
Top

John Ericson passed away in May at age 93.
Top

And for kids of my generation the Green Cross Code man! (Once with his own Bristolian accent!)

Also a lot of comedy, from appearing in Carry on Henry, to two of the three Frankie Howerd "Up..." films (Up Pompeii and Up The Chastity Belt), along with a Benny Hill sketch! Plus in Jabberwocky.

And he's in the 1978 BBC Shakespeare cycle production of As You Like It as the wrestler who is not above kicking an opponent in the crotch when they are down (with the audience wincing in pain in sympathy for the victim!) before the hero bests him.

Spark Notes Study Guides wrote:[The character of Charles is] a professional wrestler in Duke Frederick’s court. Charles demonstrates both his caring nature and his political savvy when he asks Oliver to intercede in his upcoming fight with Orlando: he does not want to injure the young man and thereby lose favor among the nobles who support him. Charles’s concern for Orlando proves unwarranted when Orlando beats him senseless.

Pat Patterson, trailblazing pro wrestler who was a massive influence on Vince McMahon and WWE, and one of the earliest openly gay men in the industry.
Top

Australian actor Hugh Keays-Byrne, who didn't only play the lead baddies in Mad Max films, but they're what granted him immortality (or Immortanity).

Incidentally, it took me the better part of a decade to see his Toecutter in its full glory - until the original version popped up on BBC2 in the early 1990s, the only version of Mad Max available in the UK was via Warner Bros' notorious American-dubbed atrocity (Christ knows why this was foisted on Britain; we've collectively never had a problem understanding Australian accents, and Londoners like me had even less difficulty, as Strine mutated from working-class London in the first place), and Keays-Byrne's performance suffered more than most, because his dubber made no attempt at replicating the deliberately wayward accent, to suggest a lifetime of nomadic drifting. Watched properly, his performance was absolutely transformed.
Top

CSM126 wrote: ↑
Wed Dec 02, 2020 10:48 am
Pat Patterson, trailblazing pro wrestler who was a massive influence on Vince McMahon and WWE, and one of the earliest openly gay men in the industry.

To put a finer point on it, he was out to the people he worked with, not necessarily on camera (he would finally say that he was gay in 2014 on the WWE Network original series Legends House). He wrestled from the 60's to the early 80's, and later appeared as one of Mr. McMahon's "stooges" in the late 90's. In between that time he was mostly off-camera and working behind the scenes as McMahon's right-hand guy in writing WWF tv and developing talent (he is largely credited with creating the Royal Rumble match).
Top

Warren Berlinger, of Blue Denim and The Long Goodbye.
Top

Even made a few films:
After retiring form track, Rafer Johnson began acting in movies, including appearances in:

Per wiki, Kirk Douglas had Rafer lined up for a role in Spartacus but ridiculously that would have compromised his amateur status and Olympic career. Why you could work say bagging groceries but not a role in a film is hard to comprehend.
Top

Czech critic Antonín J. Liehm, who was one of the first people to recognise that something extraordinary was happening in Czechoslovak cinema from the early 1960s onwards, and went on to become the Czechoslovak New Wave's most comprehensive and sympathetic chronicler while it was still a going concern. (Peter Hames, his most important English-language equivalent, didn't start seriously researching it until the early 1970s.)
Top