Discuss DVDs and Blu-rays released by Eureka/Masters of Cinema and the films on them. If it's got a spine number, it's in here.
Forum rules
Please do not clutter up the threads for MoC titles with information on pre-orders. You can announce the availability of pre-orders in the MoC: Cheapest Prices / Best Places to Buy / Pre-Orders thread. Any posts on pre-orders in any other thread will be deleted.
Post Reply
7 posts • Page 1 of 1
Message
Author 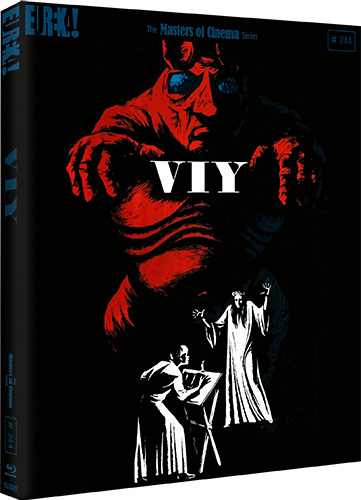 Bursting with startling imagery and stunning practical effects courtesy of directors Konstantin Yershov, Georgi Kropachyov, and perhaps most notably, artistic director Aleksandr Ptushko (the legendary special effects artist whose spectacular stop-motion effects and innovative colour cinematography has seen him referred to as the Soviet equivalent of Willis O’Brien, Ray Harryhausen, and even Mario Bava), VIY has influenced generations of directors for more than half a century.

In 19th century Russia, a seminary student is forced to spend three nights with the corpse of a beautiful young witch. But when she rises from the dead to seduce him, it will summon a nightmare of fear, desire, and the ultimate demonic mayhem.

The Masters of Cinema series is proud to present VIY in its UK debut on Blu-ray from a HD restoration of the original film elements.

Exclusive to this Limited Edition, The Masters of Cinema series also presents director Djordje Kadijevic’s A HOLY PLACE [Sveto mesto] for the first time ever on home video in the UK.

And of course, I get this right after receiving Severin's release. Oof.
Top

Looks like that "Three Russian silent film fragments" are the same clips which were on the old Ruscico dvd disk of "Viy" from twenty years ago.
Top

Yup - no reason for them not to be, since they've never been released by a UK label before.
Top

There's also a full-page rave in the current (April 2021) Sight & Sound, but at the moment it's print and proprietary digital edition only.
Top