Discuss DVDs and Blu-rays released by Criterion and the films on them. If it's got a spine number, it's in here. Threads may contain spoilers.
Post Reply
4 posts • Page 1 of 1
Message
Author

Streetwise/Tiny: The Life of Erin Blackwell 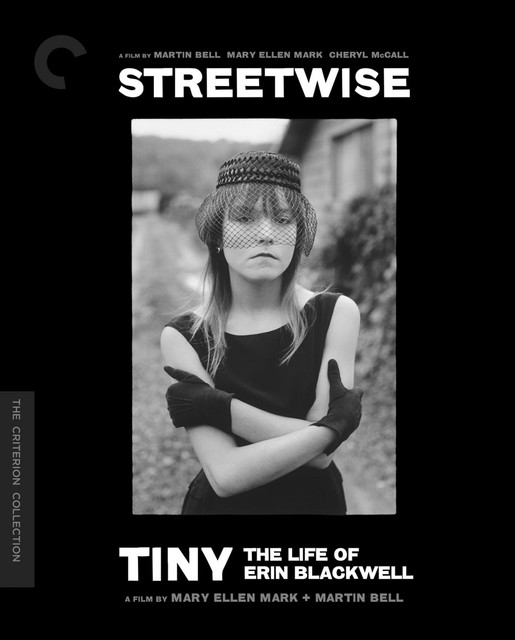 In 1983, director Martin Bell, photographer Mary Ellen Mark, and journalist Cheryl McCall set out to tell the stories of homeless and runaway teenagers living on the margins in Seattle. Streetwise follows an unforgettable group of kids who survive by hustling, panhandling, and dumpster diving. Its most haunting and enduring figure is iron-willed fourteen-year-old Erin Blackwell, a.k.a. Tiny; the project’s follow-up, Tiny: The Life of Erin Blackwell, completed thirty years later, draws on the filmmakers’ long relationship with their subject, now a mother of ten. Blackwell reflects with Mark on the journey they’ve experienced together, from Blackwell’s battles with addiction to her regrets to her dreams for her children, even as she sees them repeat her own struggles. Taken together, the two films create a devastatingly frank, empathetic portrait of lost youth growing up far too soon in a world that has failed them, and of a family trying to break free of the cycle of trauma—as well as a summation of the life’s work of Mark, an irreplaceable artistic voice.

This is an extraordinarily special movie with rare access that captures something really remarkable and I’m glad this release is appearing as it’s been on the shelf longer than most Janus theatrical movies so I thought maybe it was going to just live on the channel. I have less than zero interest in ever seeing the follow up though, even if that seems weird!
Top

Surprised not to see this in the list of extra features:

...as it seems like a good mid-point between the original film and the follow up. But I haven't seen the follow up, so maybe it's not necessary.

Would have also been interesting to have some extras detailing the MASSIVE world-scale widening discrepancy between the rich and poor in Seattle at the time, as it has only gotten worse and more or less set the example for every other city in the country -- especially cities whose "growth" was essentially via intangible products like tech, rather than manufacturing (despite the presence of local powerhouses like Boeing).

Growing up in the Midwest Rust Belt, they showed us this film in high school shortly after it was released... we had our share of urban decay and homeless, but man, this wrecked my mood -- I loved it and wanted to live someplace like Seattle! A few years later I would be getting off the bus every morning and walking to work past that red and gray parking garage seen so often in the film. The homeless and hustlers were still there (not so much kids, though) but clearly there was a difference. The homeless were almost legitimized since everyone in the town - IT geeks, sex workers, office flunkies, restaurateurs, etc. - were all now essentially on the make, following the buck. Strange and disturbing how little they were able to empathize with the subjects of this film.

Although, not to get all Svet about it here (can't wait for his review, ha) I find it appalling and disheartening to see in the description above that Tiny had ten children! To paraphrase Joe Biden: "C'mon, man!" That's not gonna help matters, jeeeeeeeeez.
Top

I'm not sure if the titles of the four short films were included with the original announcement, but they are now on the Criterion page: