I imagine The Howling is just a 4K release as they didn't release the Blu-ray that long ago. Peeping Tom, Near Dark, The Outsiders and The Servant are going to be new scans I'm guessing (and Terminator 2, as I imagine they decided to re-do it?). Mandabi and Basic Instinct have already been announced. Ghost Dog might not be in the UK as it was previously Film4, but I'd be happy whoever released it here (it's a favourite of mine).
Top

It's a mix of everything that also includes simple theatrical re-releases.
The Howling is supposedly getting a new makeover, we already know Mandabi has been restored in 4k, but Bridget Jones and Terminator 2 are just going to be re-releases with no new technical work.

That's kind of astonishing - I actually remember when one of the LaserDisc sets was considered a crown jewel for any home theater owner, but of course that was over 20 years ago.
Top

swo17 wrote:Well that's a missed opportunity because T2 has notoriously been poorly served on disc

The person at Studio Canal who attended Lyon Film Festival last year said it's known "The Howling really needs to be restored", but nothing about T2. My guess is that FWIW, it's a recent 4k restoration supposedly approved by Cameron so people think the job was done, even if it's actually awful. Some consumers defending this crap doesnt help though.
Top

Would be great I Indicator could snap up the Loseys for the UK. Or perhaps it don't work like that.
Top

I believe I have yet to see concrete proof he's the main responsible for the final color grading and for the atrocious digital botched job. Titanic 3D (despite being a 3D conversion), Aliens (despite being officially grain managed by Cameron) and Terminator 1 (not sure for this one if we know Cameron's involvement in the restoration process) don't show this kind of awful result.
T2's awful new grading also runs opposite to Cameron's supposedly notorious perfectionism since it's not even consistent from shot to shot in the new remaster. There's also the question about why he would accept now for the extended versions to be branched from obvisouly disparate sources while he specifically wanted for the older HD master the extra scenes to be restored like the TC to have a seamless presentation.

On the other hand, Studio Canal are known to botch some of their restorations, like it was for Peeping Tom, Don't Look Now and Purple Noon (Purple Noon also having an obviously problematic color grading).
Top

My memory of The Terminator’s BD was the image was fine (even if the blues leaned a little too much toward teal). For the first film it was the sound that ruined the release, due to only including the horribly revisionist surround mix with replaced sound fx. It’ll be a real shame if they just re-use the current T2 master, there’s proably not been a really good edition of it since the Skynet DVD.
Top

Lionsgate's Terminator 2 Blu-ray from 2015 is probably the best version available right now. It isn't great, but it appears to be the same master as the "Skynet Edition" edition with less DNR.
Top

Yeah, I was thinking of getting that sometime before it vanishes. It just feels like such a sadly incremental improvement over the Skynet BD edition, considering a far more recent ‘restoration’ exists.

The DVD release still feels like the last time the film was truly released with care, rather than a perpetual money maker for Lionsgate.
Top

You are not wrong.

I only had the DVD special edition with the metal slipcover, which I'm pretty sure I sold a long time ago (either that or I lost it, as I can't find it), so I was without a copy of T2. I ended up buying the 2015 Blu-ray a couple years back from Target when they had a $5 Blu-ray section to replace the missing/sold DVD.
Top 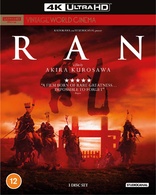 The Servant is getting a 4K UHD Blu-ray release in September. Pre-order up on Amazon France.
Top

This makes my day. Was hoping Criterion would release this film as Losey's entry into the Collection, but a 4k from Studio Canal is even better.
Top

I remember buying their Howling Blu ray a few years ago, which touted a fresh scan / new restoration on the packaging but which was the same aged master used by Shout Factory. 4k would be appropriate & a fitting upgrade.

Very excited for Mr Klein B-R, hope and expect The Servant to be 4k in the U.K.; Near Dark & Brotherhood of the Wolf B-Rs are most welcome; no expectations whatsoever for T2, whose original look should be respected.
Top

Blu-ray only, but a collector release most likely with a big book like our French release of Le trou.
Top

Would love to see his A Doll’s House get an upgrade as well. Not sure whom the rights are with. There was a very good dvd back in the day.
Top

Before we get too excited about The Servant upgrade, we should note that the Amazon France listing says "Couleur, Cinemascope". Losey fanciers will know both of these are wrong.

There's also no detail whatsoever about the "bonus" Blu-ray, which may also be in the realm of fantasy. (Why would a release of The Servant plus features need two Blu-rays?)

Knowing they can't even get this right, I'll be waiting for the reviews.

Loseyphiles have long been more visible in France than in Loseyphobic US and UK, so I suppose we have only ourselves to blame...
Top

As Tenia mentioned if Le Trou is any measure of this release (and it is after all in the same series of Collector's Edition) the bountiful supplements are on their own Blu so 2 x Blu-ray discs is feasible.
Re format and colour that's another kettle of rotting fish
Top

I was talking about Mr Klein and its 50€ release.
However, SC has been known for putting 2 poorly used BDs instead of properly using 1 BD-50 disc space so it could very well be that The Servant will be 1 UHD + 2 BD like the Carpenters were.
Top

Another one for September: The Howling 4K UHD pre-order up on EzyDVD (Australa).
Top

Can't help think most of these will turn up in all the markets that Studio Canal has a presence.
Top
Post Reply
1874 posts