Libuše Šafránková, prolific Czech actress who was the female lead in the Oscar-winning Kolya and worked with Jiří Menzel several times, but she’d be immortal in the Czech public consciousness even if she’d only ever played her most famous role, the title character in the local megablockbuster Three Wishes for Cinderella.
Top

Small but great line up of producer credits: The World of Henry Orient, A Fine Madness, Midnight Cowboy, The Day of the Locust, Coming Home, Promises in the Dark (which he also directed) and The Mosquito Coast.
Top

For those who missed my earlier post in the Some Like it Hot thread, this woman was an incredible pastor for the Lutheran church I attended in my hometown for several decades and was one of just a mere handful of cast members left standing of Some Like it Hot, as well as The Ten Commandments (1956).
Top

How is Lex Luthor ever going to defeat Superman? (Also the single best thing about Network)
Last edited by knives on Sun Jun 13, 2021 9:03 pm, edited 1 time in total.
Top

I’ll always remember him for Network and as the semi-incompetent hit man in Mikey and Nicky. A great actor and a nice example of the unusual looking characters that used to populate cinema.
Top

No report I have read says where he died. I know that he lived for the past few years in Karlstad, Minnesota. My family is from there and I would see him when I came to visit, most recently two years ago on the local golf course. I have met many celebrities but who would think of meeting one in BFE Minnesota.
Top

Even though the film is inconsistently successful at translating the source novel's thematic layers, Beatty's performance in Wise Blood is so perfectly suited to the character that he's arguably the most 'right' thing about the adaptation
Top

I still mainly associate him with Roseanne from all my years as a kid watching reruns, but real talk the fact that he didn't win Best Supporting Actor for Network is a joke, especially when his costars ran the other three categories. His role is the textbook definition of stealing a movie with one scene
Top

I fully agree with therewillbeblus about Beatty's great performance in Wise Blood where his character turns up late in the film and almost threatens to steal the show, which is perfectly appropriate for causing the main character to spiral off into his crisis!

Of course it may still be impossible for Beatty to be known for more than his debut of being forced to squeal like a piggy in Deliverance, which might still be the most intense (at least the most famous) male rape scene in cinema. One of Beatty's biggest roles though was musical, as Josef Locke in Hear My Song, especially in the finale (I had forgotten that it does a 'reverse Dr Strangelove' at the end!)

He also had a good run of comedy films too with the incredulous American General giving the best line in Thunderpants (the film about a farting kid becoming an astronaut and powering the shuttle with his emissions), and in Radioland Murders.
Last edited by colinr0380 on Mon Jun 14, 2021 4:47 am, edited 1 time in total.
Top

At his home in Los Angeles, apparently.

He also had a good run of comedy films too with the incredulous American General giving the best line in Thunderpants (the film about a farting kid becoming an astronaut and powering the shuttle with his emissions),

And there was me thinking Exorcist II was the most embarassing thing he'd have on his CV.

Love him as Otis - probably the sweetest accomplice to potential mass-murder ever!
Top

I presume Exorcist II is because of Beatty's connection to John Boorman after Deliverance. It may also be worth noting that Thunderpants is from the director of Bill & Ted's Bogus Journey and the first Garfield movie!

I had completely forgotten he was in the "Airport meets Airplane! but with a bus" disaster film parody The Big Bus too as the equivalent of the George Kennedy down to Earth blue collar engineer figure!

Oh God, and he was excellent as one of the couple obviously based on televangelists Jim and Tammy Fay Bakker in the Exorcist parody Repossessed, in which he carries on a film long murderously jealous vendetta against his wife's pampered poodle Foo Foo!

I wouldn't mind seeing in full some time that film he was in from master of the high concept made for TV disaster movie Jerry Jameson, The Deadly Tower, about the Charles Whitman shooting spree (with Kurt Russell as Whitman!)
Top

He was great in everything he was in, particularly the first couple seasons of Homicide. The book described the detective he was based on as big as a bear, and he was pretty damn heavy at that time. Kudos to him for losing a lot of weight, the next time I saw him in Cookie’s Fortune, he looked amazing.
Top

Also I just found out that Ned Beatty (along with Andy Garcia!) was in the pilot of the Murder, She Wrote series!
Top

Frank Bonner, of Equinox and WKRP in Cincinnati fame.
Top

John Paragon, Jambi the Genie on Pee-wee's Playhouse. By coincidence, I watched his starring turn in the Cannon Movie Tale The Frog Prince earlier this year. The film is as cheesy and low-rent as you would expect of a Golan-Globus children's production, but Paragon's performance was easily the best thing about it.
Top

Feego wrote: ↑
Sat Jun 19, 2021 8:08 pm
John Paragon, Jambi the Genie on Pee-wee's Playhouse. By coincidence, I watched his starring turn in the Cannon Movie Tale The Frog Prince earlier this year. The film is as cheesy and low-rent as you would expect of a Golan-Globus children's production, but Paragon's performance was easily the best thing about it.

Wow, no idea he was the guy on the left! (from Seinfeld) 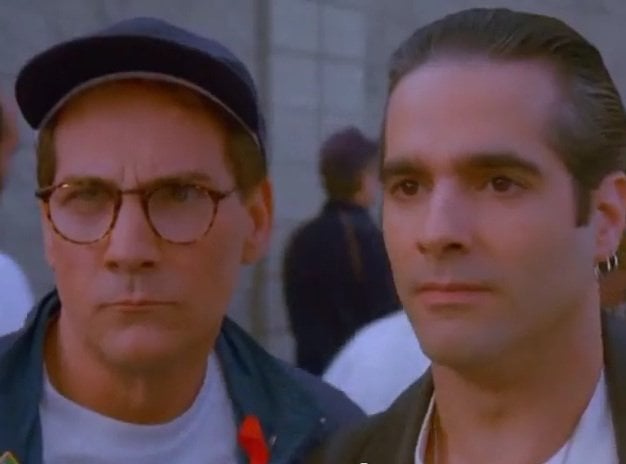 My appreciation for Pee-Wee has grown over the years - the films were all right, but the original children's show was really something. The Blu-ray set is exemplary, and even if it weren't for the massive technical upgrade (true HD from fresh scans of the original 16mm negative, they even re-did the VFX since they were originally done in SD video), the extras are amazing with some fond remembrances from people who got their start on the show. I only wish Phil Hartman was still around to contribute to that set.
Top

Jackie Lane, aged 79, best known for playing Dodo Chaplet, a Doctor Who companion, in 1966. She later left acting to become a theatre agent and one of her clients was fourth Doctor Tom Baker.
Top

Has a movie been made on him? If not, given how crazy his life was, it's only a matter of time.
Top

Scott Alexander and Larry Karaszewski wrote a script about him called King of the Jungle that keeps coming close to getting made. One iteration I think was supposed to star Michael Keaton.
Top

Not a film but Clint Basinger (of LGR) did a great little video about McAfee's history. McAfee's Twitter feed is a wild ride and there was even a conspiracy theory a couple of years back that he was the person behind the YouTube channel posting drone footage from Jeffrey Epstein's island.
Top

GaryC wrote: ↑
Wed Jun 23, 2021 3:40 pm
Jackie Lane, aged 79, best known for playing Dodo Chaplet, a Doctor Who companion, in 1966. She later left acting to become a theatre agent and one of her clients was fourth Doctor Tom Baker.

Dodo started out as a Northern schoolgirl, then part way through her first full story, some BBC bigwig dictated she had to speak proper!
Top
Post Reply
9419 posts