Orlac wrote: ↑
Sun Aug 19, 2018 5:01 am
Sadly, the Cantonese mono track on Police Story 1 is NOT the original but the weird Media Asia re-mix that was used on the HKL DVD. Music constantly drowns out sound effects and dialogue, and some of the sound effects are not genuine. This is clarified by comparing this with the bona fide English dub and the Japanese print as an extra.

This bugs me more than any discrepancies in color grading does. It seemed to be a big thing for a while to remix mono Hong Kong films in sloppy 5.1 with new sound effects. I remember watching Yes, Madam and all the gunshots were digitally clear and sharp while all the dialogue sounded like quickly dubbed audio from the era. Eureka has been so good about their previous Hong Kong releases, but why did it have to be the one I was looking most forward to?
Top

A blu-ray.com member, who has seemingly been quite strongly supporting Eureka for their Fortune Star releases, has stated on blu-ray.com's release topic that he tracked a usable original mono track and supplied it to Eureka for an upcoming replacement program. However, I don't think Eureka has communicated yet about the program itself, so I would wait an official announcement about that.

However, it re-assures me about the lengths Eureka is willing to go to get this right (because replacements for this kind of reasons are extremely rare) and in keeping my pre-order, but also makes it all the more frustrating that they were contractually prevented to alter the 4K masters and correct the color scheme, yet have to dig out themselves the original mono track because Fortune Star were incompetent on this matter.
Top

That blu-ray.com member is responsible for supplying basically all the alternate presentations for both films as well as the original mono for PS2 (which you'll notice no one has been complaining about), apparently he's credited in the booklet as his screen name but I haven't had time to look.
Top

I wish they had sorted out the issues before starting mass shipments. I just received notice that my order was shipped from Amazon UK. Sigh.

Just hoping they are more meticulous before shipping on their “Project A” release, which I am looking forward to far more than the “Police Story” release.
Top

The blu-ray.com member stated they might have overlooked the PS1 mono track status because the Iron Monkey one was okay. It clearly will serve as a lesson that every element for each movie needs to be double checked, and it certainly looks like they will do so.
Top


Eureka has been made aware of some audio dropout issues on a limited number of copies of Disc 1 (POLICE STORY) featured in our JACKIE CHAN’S POLICE STORY & POLICE STORY 2 Box Set. If you have recently purchased this product and have been affected by this issue then please contact us as soon as possible via our customer services email customer@eurekavideo.co.uk with a proof of purchase (e.g. copy of invoice or despatch note), full name and address, and we will happily replace the disc for you.

We apologise for any inconvenience caused.

Much of the discussion on blu-ray.com is revolving around the color timing, which is apparently very suspect.
Top

J Wilson wrote: ↑
Wed Aug 29, 2018 10:36 am
Much of the discussion on blu-ray.com is revolving around the color timing, which is apparently very suspect.

PS2 is affected by Ritrovata's debatable grading, especially darker scenes. I'd be more lenient that usual with the day scenes though, but they also show the yellow-ish bias Ritrovata gives to their color restorations. I however think other Ritrovata restorations have much more pronounced grading issues than this one.

PS1 is, to me, less affected. It also shows some biases, but I found it to be rather light, though still recognizable. However, outside of the 5.1 track dropouts, the mono track turned out to be a remix and not the original one, and the subtitles still contain some typos.

The dropouts and the mono track at least will be fixed for the replacement discs.

These are unfortunate, and regarding the gradings unfixable since Fortune Star didn't allow tweaking the materials here, but at least, the "disc-related" technical issues will be at least mostly fixed through this replacement, which is a really good thing because this release otherwise feels so thorough I'm wondering how it can be legit ! The amount of content and alternative cuts are usually the kind of stuff you only find on bootleg fan releases (even if licensing limitations still prevented a few cool stuff like re-creating the alternative cuts from the 4K restorations), and it's absolutely marvelous Eureka managed to include so much here for the 2 movies.
Hell, even the booklets are full of stuff I never thought would be included here !
Top

I only received my set a couple days ago, so I haven't watched either yet to judge, but it sounds like tweaking TV settings can mitigate some of the color issues if desired. I agree about this release being so loaded that it seems bootleg, though. After sitting through my HK blu-ray copy of A Chinese Ghost Story recently, with its gibberish subtitles, getting a release like this of an HK classic is amazing.
Top

So is this worth it once the problem discs have been fixed? I was hoping this release would be definitive, which extras-wise it probably is.
Top

The grading of the 2nd movie is a pain in the butt, but the release otherwise totally worth it and definition wise, the new restorations are tremendous.

I’m just curious, can anyone speak to the content of the booklets? At this point I’m likely never going to see them but it would be nice to know what’s in them. That information does not seem to be readily available anywhere that I can see.
Top

Specs for the UHD of the trilogy: 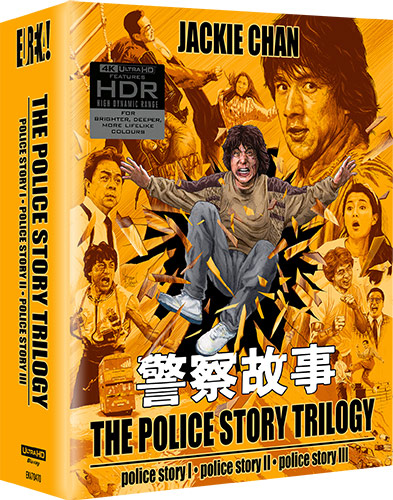 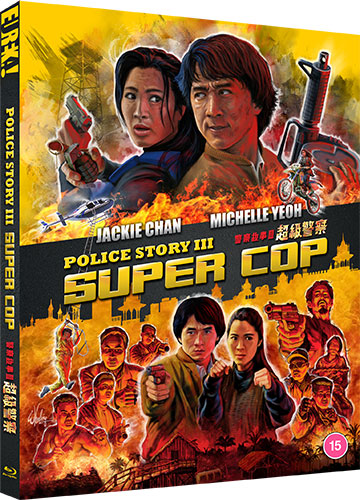 According to Brandon Bentley, Fortune Star are being much more lenient, and allowed them to do a reconstruction of the Hong Kong cut of Police Story 2. Shame Eureka isn't including it in 4K.
Top

With the announcement of the US cut being included as a bonus feature, here's hoping that a Region A-equivalent release of Supercop is on the way (and a 4K set of all three films as well, while we're at it).
Top

According to Irongod, Eureka paid for a brand new restoration of Police Story 3. Hopefully this an improvement over the previous restoration in regards to the color timing, since the previous one had that horrific Ritrovata tint to it.
Top

More like a new grading, I guess? Not that I doubt the financial power Eureka has to fund a 4K restoration from scratch, I just find it utterly unnecessary.
Top

Same here, the "original" 4k restoration was very competent except for its obvious Ritrovata'ed grading. Colo-correcting it to remove the lab's signature would be plenty enough.
Top

I'm certain that Eureka would have mentioned it in the specs if all they did was do a new color re-grade from the previous 4K restoration, especially since they had explicitly mentioned that they had done a new color grading for their release of 'The Bride With White Hair'.
Top

So is this set the only place where one can get the original Hong Kong cut of PS2 in HD?

Also, do you know if the remixed mono track on PS1 was ever fixed?

This set is like 4 cases thick, but whoever did the wrap for it didn't get the memo. Still looks very nice though!
Top

Something had to have gone down behind the scenes because the J-card misprinting isn't the only packaging issue. The covers for PS1 and 2 look like bootleg covers and the inside has a photo print across even though they are housed in black keep cases. It's just a mess as a presentation, outside of KFB's cover on the front. KFB hasn't posted on the other forum for a while, either. Their reasoning for skipping his reverse artwork sounded uncharacteristically strange for them, too. If there'd been a disagreement with KFB about meeting deadlines and they needed more time to do more aesthetically pleasing covers of their own (presumably the contract for the UHD editions precluded Darren Wheeling from stepping in late?), I don't think anyone would have minded very much if they'd delayed the release by a month. At the end of the day, the presentation of the films themselves is what matters most and there the hard work seems to have paid off, but the overall impression of the set is a little shoddy.
Top

I too wonder what happened here. It doesn't really feel like Eureka's usual MO to just let go of such obvious approximations instead of delaying by a few weeks the release to sort it out (especially when it wouldn't have meant missing a particular timing here, like Christmas). It also doesn't help that this is Eureka's first UHD releases and you'd want think they'd prefer the delay than having some people remembering their first UHD releases having approximations like these.
Top
Post Reply
48 posts

Return to “Masters of Cinema Rumours and News”