Yeah, I'm not sure why some people are trying to downplay someone's excitement of a future release of a film that they love over encoding of all things (I'm actually convinced at this point that the term "encode" is just being used as a buzzword).

On a different note, I would be surprised if this were to be released on UHD. Then again, I was also surprised over the The Last Waltz 4K release, so I guess there is always a chance.
Top

yoloswegmaster wrote: ↑
Fri Aug 26, 2022 6:20 pm
Yeah, I'm not sure why some people are trying to downplay someone's excitement of a future release of a film that they love over encoding of all things (I'm actually convinced at this point that the term "encode" is just being used as a buzzword).

On a different note, I would be surprised if this were to be released on UHD. Then again, I was also surprised over the The Last Waltz 4K release, so I guess there is always a chance.

it is sometimes, and then there's times (the Criterion Great Escape is an excellent example) where its glaringly obvious to me that its poorly done.

I'm just thrilled out of nowhere (no former working history with Tarr, no other releases) we get word that a big gateway title (it was the first Hungarian movie I ever saw, long before any Miklós Jancsó or Márta Mészáros films) for me is coming from the label I've (naturally) supported the longest. I'm here for Arbelos and their releases (I prefer them to some of the labels that get Tsai Ming-Liang films and dump them on featureless Blurays with a $39.99 pricetag and ZERO marketing) but truly just a cool moment to see Janus doing this, and hopefully they'll even tour it and it'll play a theatre near me - something that did not happen for Satantango or Damnation, unfortunately. some of my other favorite films in need of a rescue like Millennium Mambo or Lost in Translation wouldn't be a big surprise to me at all if they came to Criterion, since they have established working relationships with both directors, Tarr only gets the Criterion Channel shouts.

as for UHD - we've been burned lately with a few titles (Cure and Infernal Affairs most notably) but I think there's a slightly better chance here. Tarr and Hranitzkybeing alive and presumably will be present for this edition gives me a decent hope we can see it. Criterion is slowly but surely increasing the amount of UHDs they put out, and there's more on the way (all the French films speculated in this thread, for example). either way, this is a movie that badly needed to be rescued and we all should be thrilled it is, no matter who is releasing it - Facets is no longer a threat.

speaking of Tsai, What Time is it There? would be the next huge shocker Janus could get me with. Tsai is so much more than just The Hole playing on the channel! and the movie has a massively huge Doniel tie in, truly perfect for them
Last edited by ryannichols7 on Fri Aug 26, 2022 6:48 pm, edited 1 time in total.
Top

Yeah, a UHD is most certainly not happening unless the costs drop dramatically between now and whenever Criterion starts to produce the release.
Top

yoloswegmaster wrote:Yeah, I'm not sure why some people are trying to downplay someone's excitement of a future release of a film that they love over encoding of all things (I'm actually convinced at this point that the term "encode" is just being used as a buzzword).

I may have misinterpreted but I initially read it as celebrating the fact that Criterion were releasing it instead of Arbelos. I'm looking forward to the restoration too but if Janus didn't get it then it's obvious that Arbelos would have.

I suppose there are more than enough Tarr restorations to go around. Presumably Arbelos will put out Family Nest and The Outsider next as Carlotta has already released them in French cinemas.
Top

The art Janus is using to promote the Doinel series: 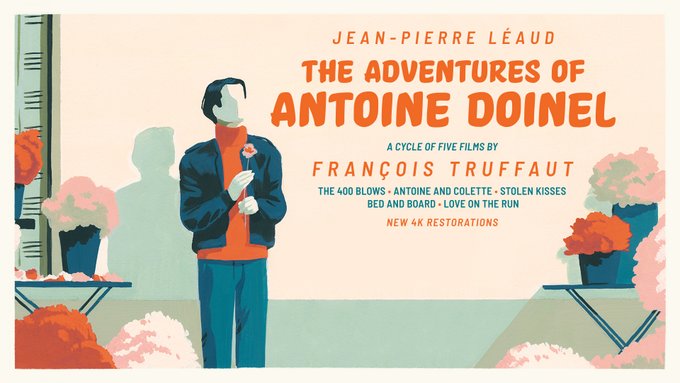 Interesting to see that they are using the exact same design that was used by MK2 for their 4K release.
Top

Sideshow and Janus have acquired Jafar Panahi’s No Bears
Top

Great get! I wonder if Criterion are going to release a Panahi set since we also know that they have the rights to his first 2 films.
Top

this hasn't been mentioned elsewhere yet - but many of us wondered after Cohen bought Hanway films what would happen to the Wim Wenders titles at the very least - the new 4K restorations of Paris, Texas and Wings of Desire both are credited to Janus in the new Film Forum and Metrograph runs. looks like Wenders retained the rights to those himself
Top

That’s not quite how it works - when a film is acquired for theatrical rather than licensed for video as these titles are by Janus as opposed to things like studio titles for discs it’s usually a very long term deal between 10 and 25 years for all rights in the territory. Ostensibly these deals can end, but it’s fairly infrequent. So it doesn’t really reflect anything on any relationships changing that they maintain the rights to these titles.
Top

Janus are in the mood for RRR
Top

Hooray! I have almost lost hope to see any Kira Muratova films coming from Criterion in my lifetime. Can't wait to see these new restorations. Hopefully, these releases will re-kindle interest in the rest of Muratova's outstanding film legacy.
Top

EO has been added
Top

Godland has been added
Top

La dolce vita is now with Janus. Also Pasolini's films Accattone, Love Meetings, The Hawks and the Sparrows have pages up.
Top


Available for booking in the UK only.

which adds up, since the standalone disc is in print in the UK but not the US. I know Paramount only holds the US rights (after the big court case) so it makes sense that Janus would go for the UK ones at the minimum
Top

That's bizarre since WAC just released a bluray for it 2 months ago. Has Janus ever acquired solely the theatrical rights to a film that was already released by another label on home video besides Phantom of the Monastery?
Top

It only credits the print to Janus. So it is possible that, for some reason, they own a 35mm print but no rights to the film.
Top
Post Reply
705 posts